I have one day left of my 1000km pilgrimage. One day, one night’s sleep not in a dormitory, a handful of hours to wander around a famously beautiful city, then I’m done. Back to England, back to real life, back to chasing cash.

What has been important about my time away has been the absence of normality, has been the heavy structure and the heavy physical toil, yet both of these for no material gain, merely a spiritual one. For me, this has been immersive, walking 40km daily for weeks, much of the time through baking heat, entering into my own thoughts and questioning, deeply, myself. It’s the separation from my usual existence that has allowed my thoughts to wander; it’s the lack of real engagement with other people (a few phone calls, some chats on Facebook) that has afforded me the opportunity to question myself and gain, surprisingly, something good.

Modern life isn’t particularly fulfilling. Life in the city, life working the daily grind, is bad for the soul. It causes stress and stress causes all manner of other worse things. There is little peace to be found in the average urban life, and taking this temporary break from urbanity is about the only way I’ll get to truly breathe deep into my lungs for years. Because my chest is always a little bit tight when I’m tense, and in the city I’m always tense, because I have to be.

Outside, in the countryside, you get a lot of relief. There isn’t traffic (well, not much of it). You can piss wherever you want. Buildings are low and often charmingly weathered, evidencing their historical existence. One can see the human effect on the landscape and it’s easy to read the long relationship between people and nature – the fight between plant life and manmade structures reminds one of the reality of existence. You can see crops grow, animals farmed, people working the land and extracting from it the consumables society, ie people far away in the cities, needs to live. It is very easy to forget that food is grown, rather than manufactured; it is easy to become detached from the land when living in a city for years. When I was at high school, I would pass arable fields every day on my journeys to and from class, but in the decade since then I have never been reminded of agriculture with as much regularity as I have in the last five weeks, hiking across Spain. And that’s a significant thing. And that’s why The Shepherd’s Life: A Tale of the Lake District by James Rebanks was the perfect book for me to read here. 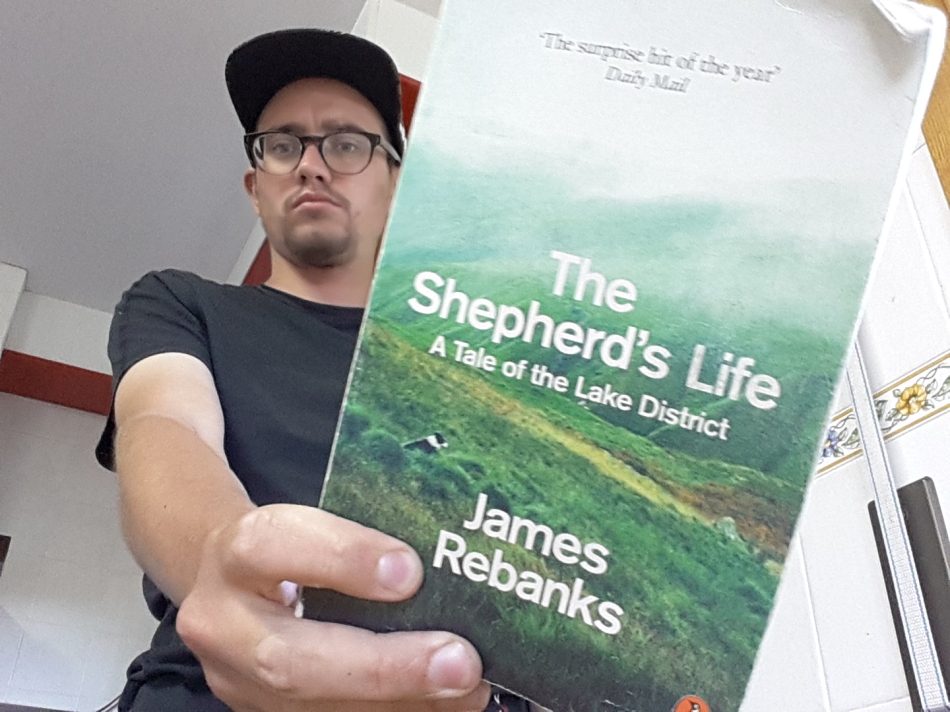 James Rebanks is a shepherd, who has a strong following on Twitter. His book, The Shepherd’s Life, is an involving and informed text that is part memoir, part pop non fiction book on the traditional mode of sheep-rearing that occurs in the fells of the Lake District. Rebanks is the latest sheep farmer from a family that can trace its history in the area back at least 600 years. His father was one before him, as was his father, and his father and so on and so on. There is history here, and Rebanks is very keen to make it clear that all the knowledge he has about sheep is something that has been passed on through the community for generations, and he posits at one point that the methods he uses in fell farming probably pre-date the Vikings, they are almost as old as the hills. (Well, the hills as revealed from under ice after the last ice age, not as old as the rock they’re made from.)
Rebanks’ wisdom is hard-earned, as is the wisdom of all those other farmers he knows and/or remembers. This is an old community, his friends are the grandchildren of his grandfather’s friends, any eccentrics from the area are remembered in local legend. Flocks of sheep, too, are passed on. Like a community of people, a flock remains the same flock even though its members are constantly in flux. There are births and deaths (and sales, too) changing every flock each year, and each year spins through a familiar and eternal cycle, matching the seasons, everything out of kilter during years of extreme weather. The structure of the book mirrors these seasons – we begin with summer, when the flocks are brought down from the fells to be sheared and looked after, we enter autumn where sheep are bought and sold and then, before winter starts, the sheep are mated (or “tupped”). Then it is winter, which is all about survival against the elements, and then we have the lambing season in the spring, before all the sheep are taken up to their high pastures and the year begins again.

Actually, that’s a gross oversimplification of the structure, for we basically have several layers going on simultaneously. First, there is the factual layer, the general layer, which talks about the history of sheep farming, the Lake District and broader cultural issues. Second to this is the broad chronological, memoir, layer, which starts with Rebanks at school, then dropping out to pursue farm work, educating himself at night school then completing a degree at Oxford before securing an interesting-sounding career with UNESCO that gives him the freedom to also work every day on his farm. He’s had a unique enough life for this to be worth reading. And then on top of this, we get snippets and asides that match the time of the year we are in, but jump about in terms of their place in Rebanks’ life. This, to be honest, is what makes the book most interesting, and this is the strongest evocation of his central conceit, which is the timelessness and the constancy of the sheep.

The text has a firm, and I think justified, problem with the general population’s detachment from the land, from farming. This, Rebanks states, he initially recognised in himself as a childish/teenage sneer at “outsiders” getting excited about the Lake District, and behaving as if they had some possession over the mountains. I don’t think it’s right to dismiss this, because I think it is very fair that lots of urbanised people do go to the countryside and think of it as a pastoral dreamland, its inhabitants being little more than rustic oompah-loompahs presiding over big milk and meat factories. That metaphor, actually, belies my reading of the book, for the oompah-loompahs know what’s going on, don’t they? They’re smart and switched on and far more in control than the parents of the children. It’s an apt comparison, for the arrogant hikers and tourists who look down on the farm workers, without whom their lovely breakfast would be a lot less divine.

Rebanks fills his book with information, with memories and with detail. His grandfather comes across beautifully, but key too in this is the latter mirroring of their relationship with the growing interactions between Rebanks’ son and his own father. These events, and this is the reason why time leaps about in a way Vonnegut would be proud of, could have happened at any point over the last hundreds of years. Relationships between man and dog, husband and wife, father and son, haven’t changed for centuries . And this does mean, yes, that there is a slight touch of normalised traditional gender roles, especially in relation to Rebanks’ mother and grandmother, but I don’t think this is as set in stone as a reactionary reader might like to imply. Many of the great shepherds and breeders from earlier generations were women, and this is spoken of with no shock and no scandal. Everyone in the community must muck in at all the busiest times of the year, and the jobs that are shared are bloody and messy and dangerous and strange, at least in comparison to the sanitised urban world.

What happened last winter is no more important than what happened ten, twenty, or thirty years ago, all that was different were the people involved, and even they are part of something bigger than themselves. The flocks are passed on, the wisdom and the sense of responsibility is passed on, the family name is passed on, the love of the lifestyle is passed on. Rebanks is part of something that stretches back beyond recorded history, his actions mirror those of his ancestors and that, of course, fills him with a sense of purpose. He has animals to look after, to maintain, and he has a place in the world. He works hard and he sees something for his work, more than just a material gain (and that isn’t even the whole point as he needs a second career anyway (and obviously now also has a third, literary, one)). He lives amongst and alongside the land, responding to its seasons and its demands, utterly unlike life in the city.

In the city, all that differs between winter and summer is how many layers we wear, the basics of life do not change. Seasonal food is far rarer now, too, with all the imports we get from South America. Life is not related to the seasons, or to the land. Meat is something in a packet that looks like it’s never been alive, vegetables are clean and even, animals are pets. It’s all just meaningless, emptiness, vacuous.

There is nothing to lock the centre of life upon: we are all reduced to individuals living alongside each other, with no community and no bond with nature. And this is bad, and this is what I’m about to return to.

It’s difficult to see anything positive about urban life when outside of it, for a lot of its comforts aren’t comforts exclusive to the urban environment and a lot of its real benefits (ie culture) aren’t taken advantage of by most people, most of the time.

We should engage more, we should interact more,  we should go outside and explore more.

Who knows, maybe Pokémon Go is about to fix all that..?

The Rebanks, though, recommended.

3 comments on “The Shepherd’s Life: A Tale of the Lake District by James Rebanks”