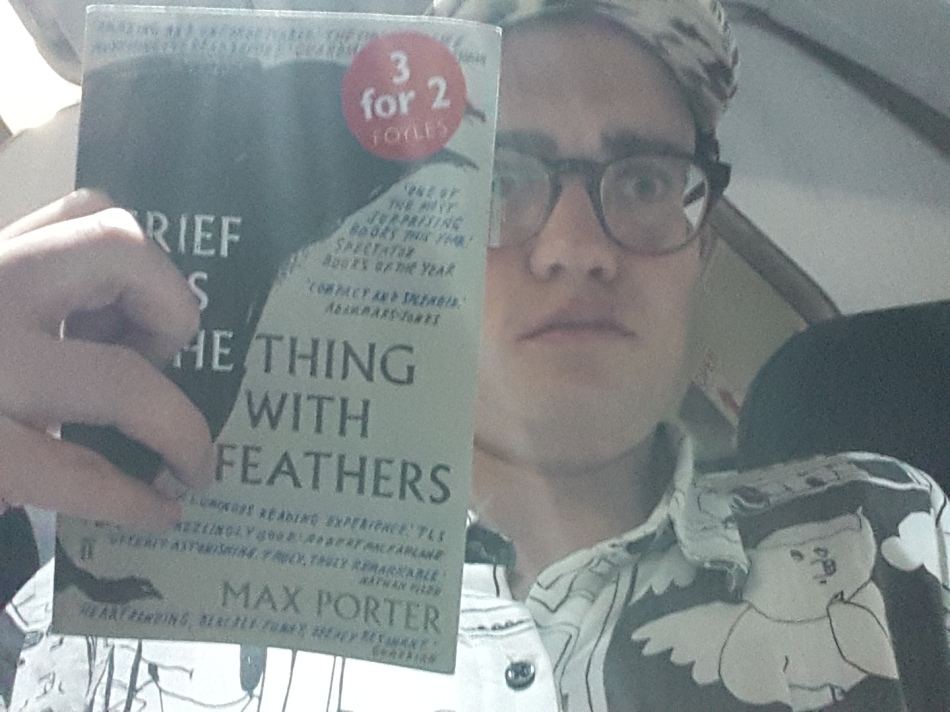 A smash literary hit of 2015 and a snazzy paperback hit of 2016, Grief Is The Thing With Feathers by Max Porter is a charming, ambitious novella (or prose poetry collection, kinda, like Citizen) about grief, about dealing with death and about the long term effects on an individual of the unexpected termination of a romantic or maternal relationship. It is beautifully simple in places, evocatively florid in others, gently experimental and overwhelmingly constant in its focus on the death of a woman, and how it affects her two young sons and her husband.

The widower is a Ted Hughes scholar, and his grief takes the literal form of a giant crow that begins to cohabit with the family. Crow is something to do with a Ted Hughes book that I’ve never read and – at risk of being judged harshly by anyone reading an amateur blog post about Porter’s book – had literally never fucking heard of until a few days ago: is it even famous?

For me, Hughes is most importantly a dead old goat who wrote dull nature poems and entered into TWO relationships which resulted in the suicide of his partner. To go Wildean – one is misfortune, two is careless [insert confirmed quotation later, or don’t]. Plath – glorious author (I imagine Hughes would’ve said “authoress”) of The Bell Jar and many poems that normal people actually read – is a writer I like and have liked for years, and as such always roll my eyes whenever Hughes is mentioned anywhere as anything other than an ogre, a literary villain. I don’t give a shit if he wrote good poems (though I enjoyed Birthday Letters), he drove TWO women to suicide. [check dates between their deaths and divorces] ANYWAY…

Grief Is The Thing With Feathers is a short text, just over 100 pages, and features well over 50 short chapters (that’s a complete estimate, I didn’t count; I counted, quickly, it’s about 70), each of which is from one of three perspectives: Dad, Boys or Crow. These are predominantly written in the first person, but some sections are in straightforward prose, others in verse, some in dialogue; in places the book is very naturalistic, elsewhere figurative/allegorical… One section ends with an invitation for the reader to complete a school-type comprehension exercise on the previous passages, and though we know that the crow “exists” only in the imaginations of the grieving, we are repeatedly asked to believe in him, to honour him and to respect him. The piece is full of literary allusions (and there are probably even more that dumbdumb ol’ me didn’t understand), as well as contemplation of psychological and psychiatric treatments of grief, grief which here is a literal feathered thing: Crow.

We see nuanced scenes where the boys and man behave blokily so they can reminisce about maternal castigation, we see the father’s shame and guilt after his first sexual encounter years after his wife died but surrounded by objects that she’d touched or chosen; we see the boys getting to say goodbye, properly, to their dying grandmother, which they never got to do with their mother, and we watch the various ways in which these three males try to honour and remember a woman who they all loved, but believe wouldn’t’ve wanted a lifetime of grieving for any of them.

Porter’s book is sad and it is poignant, it is life-affirming despite it’s focus on death. Through its high concept (the crow), it explores a topic central to literature (death) in a new and exciting way. The prose is engaging and self-knowing: when it gets smaltzy it draws attention to itself: “you sound like a fridge magnet”, says Crow to Dad at one point. The ending is painful, beautiful, right; the book made me cry and weep and weep and cry, and so impressed by the prose and conscious of its length I read it twice: an honour I usually reserve only for good poetry.

Grief Is The Thing With Feathers is funny, sad and stylistically interesting. The first time I read it through I felt, cynically, that the emotional heft of the simpler portions of the text made the more fanciful sections somewhat redundant, but on deeper reading I understood that the purposes and the resonances of this tightly woven piece were deeply appropriate to the subject matter – dealing with the unexpected loss of the central person of a life. Porter’s text works well at evoking loss, confusion, anger and guilt: it is an excellent study of grief.

HOWEVER – and that is a big however – there is something that keeps me from closing this post with boundless praise: the odd author biography included at the end of the book. The following sentence, printed as the first of three, stuck out when I saw it, and not in a pleasant way:

Max Porter Works In Publishing. (My caps on the last three words.)

Yeah, of course he does, he’s a writer.

No, wait: if Max Porter’s only connection to Publishing was his writing, this description of himself would be a ridiculous tautology. We’re holding in our hands a book by the man, of course he gains income from the publishing industry. But no, this isn’t what it means: it means that Porter is a BOOKS professional, that he’s involved in the production of other people’s books. What does this mean?

One: Does this mean Max Porter’s book is little more than a “fuck you” to all the writers he’s ever clashed with professionally, who’ve said to him “If you know so much about good writing, yeah, then why don’t you write a book?” If this is correct, then it means that Porter’s pretty snarky.

Two: Porter is part of the tribe, as it were, thus his success is important for the dignity of other people who “Works [sic] In Publishing”. The publishing industry has a vested interest in Porter’s book not only being worked on until it’s great, but making sure that it’s well reviewed in the right places. Is this the entire publishing industry raising its collective middle finger to every author who’s ever said to any of them: “If you know so much about good writing, yeah, then why don’t you write a book?” If this is correct, then it means that the entire publishing industry is pretty snarky.

Three: Porter’s manuscript got to the right people, ie the agents and publishers most likely to want to publish it – because of his work connections. But we all use what we’ve got, don’t we, and everyone’s a closet lover of nepotism when it benefits them, aren’t they, even though we’re meant to pretend that we’re not? Is Porter drawing attention to a deliberate societal paradox in order to smash it apart, something that’s actually quite progressive and thus deserving of praise? “Yeah, I may’ve used my connections to get this book deal and I’m not hiding that, but it stands up on its own merits, doesn’t it?” Read in this way, this is yet another snarky request to “Swivel”.

Four: The folks at Faber think that working in publishing is really cool, and that we readers will think more of Porter because of this. Normally the first sentence of one of these bios is about age and origin, a weighty signifier of identity. For Porter – or Porter’s publishers – the fact that he works in Publishing is the most important thing about him and who he is. His poor birth town, his poor birth year, his poor wife and children (both in sentence two), his poor everything else about him. Publishing is more important than everything else: what a load of snark.

I’ve written more about this sentence than the actual book.

The boss got a sofa in his office so we snuck in while he was out and did some tomfoolery. pic.twitter.com/WvfMvX3f8y