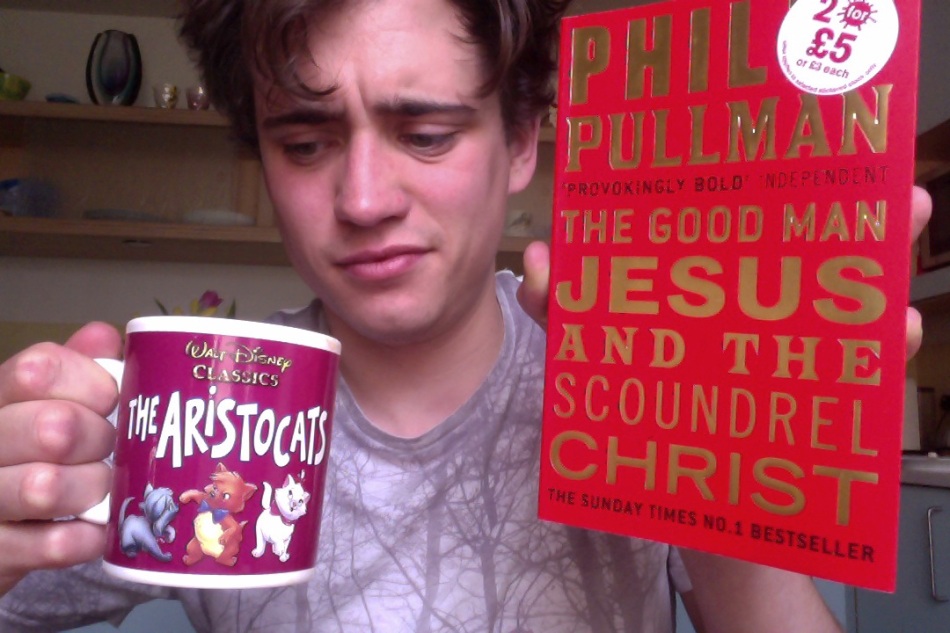 Philip Pullman’s The Good Man Jesus and the Scoundrel Christ tells the story of Jesus and of Christ, twin sons of naive Mary (impregnated by a man who claimed to be an angel), married to Joseph.

Jesus and Christ grow up as different people – Christ learns scripture and does some miracles, but Jesus befriends everyone and makes up simply worded speeches. Then Jesus is crucified to death and the other, CHRIST, claims to be him a few days later and the myth of CHRISTianity and its evil, evil church begins.

This is a parable, the kind of story Jesus would have told, about the horrors of the Christian church in comparison to the contents of its scripture. Pullman makes clear an interest in and approval of the speeches of Jesus, much of the book being paraphrased/loosely rewritten/contemporised extracts from the Gospels…

It’s an attack, and a very clear one, on organised religion. On the pomp and the exploitation and the hypocrisy and the lies and the control that the church – specifically, I think, the Catholic – still wields to this day. It’s a reasonable thing to be angry about, but in a “novel length” work (barely – it took me about an hour and a half, maybe two hours, to read) it’s far too didactic to succeed. There is very little evocation of setting, there is very little physicality – some nice descriptions of lepers, but little more…

It’s simply written in a quasi-Biblical style, but without the poetry of the King James Version. In its criticism of people spinning stories used for nefarious ends from the actions of “good” people, it is very similar to Colm Tóibín’s The Testament of Mary, but the second book (though shorter) is far more moving, far more poetic and far more successful.

The conspiracy-theory stuff about twin Jesuses sat, for me, badly against actual magic and miracles and angels appearing at some points in the text – there were too many instances of the supernatural for a natural explanation of the resurrection to be necessary. If Jesus and/or Christ can do pretty much all the other miracles the Bible claims, why can’t he/they come back from the dead?

The Good Man Jesus and the Scoundrel Christ has an excellent title, but feels very quickly put together. A simplified New Testament with a few scenes added in to bulk up a pointless explanation-of-the-resurrection theory.

Not thrilling, not engaging. Far inferior to Jim Crace’s Quarantine and the aforementioned Tóibín. And, I hope, the Biblical-era novel I myself am working on.

NOT RECOMMENDED. Sorry to any fans.