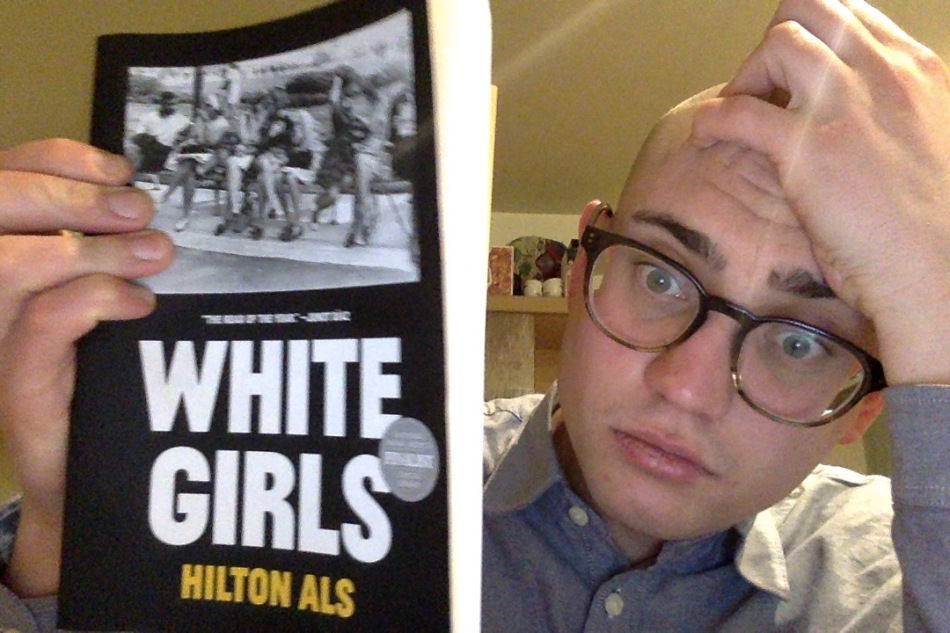 White Girls is a lauded collection of essays by Hilton Als, published by Dave Egger’s trendy San Franciscan non-profit publishing house McSweeney’s, way back in 2014 (“when I had hair and hope for the future”, as I always say). It contains thirteen essays of varying sizes, the shortest about 6/7 pages, the longest around 100. All of them focus on different aspects of recent American culture (including cinema, music, television, fashion, art), as well as more weighty, underlying themes: this is an intelligent and emotional book about race, gender and sexuality, and manages to be satisfying as both informed criticism and deeply personal memoir. I enjoyed it.

The opening essay is called ‘Tristes Tropiques’ and is the longest piece in the collection. This focuses on friendship, love, mentorship, ageing, developing sexuality and health. Centred on the narrator – I presume here it is Als, though it isn’t always – and his life’s most significant friendship, with a person referred to as Sir or Lady (SL for short). SL is, like the narrator, a black male, though possibly he (this is the pronoun always used) has been a woman: certainly he lived in an extreme feminist lesbian commune in his past. SL is particularly attractive to white women (whatever his gender is), while our narrator is a gay black male. He veers in and out of love with SL, but somewhat asexually. The narrator’s long term lover dies of AIDS in the early nineties, but the reader predominantly sees this relationship through the prism of its effect on the relationship between the narrator and SL, and between the narrator and a woman he calls Mrs Vreeland (though this isn’t her name). The narrator and SL are like twins, Mrs Vreeland and the narrator are also like twins. The title of the collection – White Girls – refers to the fact that there are many similarities between the lives of black homosexual men and white women: both of them are competing for male sexual attraction, and both of them receive similar types of abuse from white male partners due to a presumed inferiority. SL and the narrator are twinned because of their blackness and their shared success in the white-dominated media industry of the 80s and 90s, while the narrator and Mrs Vreeland are twinned because they’ve both loved and lost white m-

ASIDE: I’m not being very insightful, am I? It’s latish, but not that late. Certainly not as late as I’m used to being awake, as a bit of a waster. I’m off the booze again, most of a week now and I’m getting fucking bored to shit. There’s nothing better about sobriety, not straight away: I’ve never broken through to the level where it doesn’t feel shit whilst in London. Most of the last few days I’ve been plagued with a weird, vague, nausea, and that’s only really floated off in the last few hours, but now I feel pretty tired. It seeps in, doesn’t it, fatigue? The sugars in alcohol I suppose make up for the soporific effect of the intoxicant. There’s no escape sober from the reality of consequence, either. I’ve been to two social events while I’ve been dry (which is rare squared) and have spent day following each with a  more intense and insistent anxiety than usual, playing back everything I said and realising how and why it was wrong: no “real” hangover, but a psychological one far more damaging than what I’m used to. I don’t get dialogue flashbacks when I’ve been too drunk to remember speaking. I have the vague sense, the day after a party, that I’ve done or said something terrible, because I probably did, but I’m spared the necessity of having to remember it, that’s the eternal gift of regular black outs. I crave the black outs because I hate myself, I hate what I say and how I feel around other people. I don’t have to be ashamed of the fact I only feel comfortable with other people when I’m drunk if I don’t need to remember it as fact. Socialising without a drink exacerbates my conscious knowledge of my need for booze: I crave it all the time. I’m sick when I don’t drink, I think about drinking from the minute I wake up, even if I’m not drinking. I stare at pubs (even though I don’t like pubs because of the implicit social aspect of them), leer at empty cocktail bars and get a real fucking thirst whenever I see a fancy offie. I think I probably spent about six or seven thousand pounds on alcohol last year, which is OBSCENE. (That’s a £20ish average daily spend, which sounds accurate, tbh). I would like to be happier, and I think cutting down the booze will help that in the long term, but right now it’s a fucking ball ache. It’s all that’s on my mind, distracting me from reading, distracting  me from writing, distracting me from working. As soon as I try to cut it off, I want it so bad. It’s like when I know I need to drive somewhere, I nearly drown in the internal beers I pour… I’ve given up beer, trying to shed a bit of weight, and this has resulted in me drinking pints of wine, which definitely defeats the point, but also means that I’ve been drunker recently than I have been for months. And I’ve fucking loved it. It’s great. I love being sozzled and singing along to shit songs or listening to mediocre comedy podcasts and playing Mario. It’s not the kind of happiness that lasts, though, is it? I don’t want to need alcohol to not feel like shit, whether that’s in body or in mind. But I do, I do, I do, I do. I’m going to take my dog out for a shit and then finish (read: start properly) this review in the morning, when I’ll still be sober and still be sadder. NB: It is slightly easier to get up promptly without a hangover, but not easier enough to make it seem worthwhille…

So now it’s the morning, day two of writing this post. And I’m craving booze already. I lay in bed thinking about espresso martinis, wishing there was a way to combine the caffeine kick with a non-boozy downer to set me up for the day in a happy, relaxed way but without breaking the final taboo of breakfast drinking. Grinding up a cocodemol into an espresso? Would that work? I’m not going to try it, but I am going to be fantasising about it all day, and probably all the days until I break my temporary sobriety vow and crumble back into drunk.

Identity is central to all Als’ essays here, and to all his subjects. Biographical explorations of significant cultural figures, how their background, sexuality, gender and race influenced the adult they would become. There’s a charming justification of Eminem’s longstanding cultural importance, a lament about Michael Jackson’s movement from inventive artist to cynical popstar, creatively dead decades before his physical demise. There’s a great piece on Truman Capote’s shifting relationship towards projected gender rooted in the texts that he wrote and the author photograph that adorned the jacket of his first novel. His photograph implied he was a woman, an identity he enjoyed until he wanted to make a weightier leap into the (then) butch American literary scene, so Capote made himself a conspicuous man by writing the violent, masculine, In Cold Blood.

Als also has a key interest in the families, especially the female relatives, of significant black male cultural figures. There is an essay on Louise Little, the mother of Malcolm X, as well as an extended essay half-written from the perspective of the sister of Richard Pryor (the actor and stand-up comedian). Richard Pryor is also the sole topic of a separate essay (the one about his sister focuses on the lives of other people associated with Pryor, on drug use, male ideas of female identity, inter-gender interaction), which goes into great detail on a short film he made in 1973. It is a beautiful, nuanced, piece, less than ten minutes long, and it made me weep and weep. Als writes of it in justifiably gushing tones, and the uncharacteristically positive comments under the video on YouTube are testament too to this piece’s power. If you ignore everything else you read on this page, do not ignore my recommendation to watch this video:

(NB: This video may disappear. I shared a link to another upload yesterday and that has already been removed.)

What is central to lived experience, Als writes, is how people think about themselves. Whether that is poor black men who grow up to become leaders in the fashion industry (Andre León Talley) or revolutionise stand-up comedy (Richard Pryor), poor white men who grow up to excel in what was predominantly a black medium (the rapper), white women writers who remain provincial outsiders (Flannery O’Connor), or a black gay man – Als himself – who becomes an acclaimed and award-winning writer of his own experience, the black men and white “girls” [and Eminem] who are explored in detail here are always outsiders, and usually for more than one reason. Black and gay; poor and a woman; disenfranchised but undeterred, given nothing from life other than a tough hand, but gaining reward due to effort and talent. Even Richard Pryor’s sister – who works as a voice actor in pornographic films, dubbing in sexier noises than the actors can manage – is successful at what she does, an industry leader. Most people who appear in White Girls have achieved something, in spite of disadvantages handed to them by birth. Being gay in an intolerant era, being poor when being poor meant being dismissed, being black or a woman at any time in America, a country that still defines “normal” as white and male.

The opening and closing essay are the most obviously personal in the book, and both made me cry for a long time. Als’ writing varies in tone and style, the voice he uses changes, and how truthful and accurate and honest he is being is never evidenced – the reader must take everything as fact, for there is no bibliography, no referencing, offered as proof for any of his assertions about other people’s lives. White Girls is sometimes journalism, sometimes criticism, sometimes biography, sometimes memoir, but always it is charming, emotionally charged and crisply written. There is a lot of detail here about writers who I’ve never read, as well as people whose music I’ve grown up with near constantly. This is a cross section of side-lined Americans who’ve made successes (to varying degrees) of their lives. But even with success, there is lots of sadness, addiction, disappointment, illness and pain. The passages describing the loss of a lover to AIDS are beautiful and deeply moving. White Girls is a great collection of essays, though very much a “collection of American essays” in that way American “collections of essays” are. Recommended, if you like this kind of thing. I do.