Well, I’ve been away four days and have already completed my first read of the trip. Roberto Bolaño’s HUGE The Savage Detectives. Given the speed with which I got through it, and the likelihood of INCREASED time spent directionless and alone over the next four weeks, the belief on arrival (as I struggled with an overloaded backpack) that I’d brought too many books may prove to be wrong. But don’t worry, potential Scott of the future, I downloaded Grand Theft Auto Vice City onto my/your phone before I left Lonon, so I/you/he can instead dedicate an abundance of time to that. “Hooray,” he replies.

As the above paragraph perhaps indicates, I´m already beginning to disintegrate.  No one has tried to sell me drugs or sex yet, so I can’t designate myself “off the rails” or not until either has occurred and my money and/or penis has been thrust from my trousers in an uncharacteristic way. Or not. (For the record, I’m 98% certain that under no circumstances would I become embroiled in any kind of sex games with a prostitute. Or “normal” person. Or celebrity. I also tend not to carry enough cash to buy drugs. Don’t worry, Scottfans!*)

The Savage Detectives, published in 1998 and translated by Natasha Wimmer in 2007, is a stonking, epic novel, a loosely fictionalised recounting of Roberto Bolaño and his friends’ various literary wanderings around the world. It is split into three parts, the first and the third are diary entries from the perspective of a young poet on the fringes of the disintegrating “visual realists”, whilst the second – the vast majority of the book – follows the lives of the two leaders of the group as they pursue art, verse, love, sex and drugs around the planet, from the 70s up to the mid-90s. The narrative of this section is constructed from various first person voices, collated, collected, as if interviewed. The leaders of the viseral realists are Ernesto Lima and Arturo Belano, the latter modelled on Bolaño himself.

For anyone with any passing interest in any kind of literary existence, anyone seeking a literary life, literary excitement, etc, it’s worth a read. Squalor, wealth, glamour, success, respect, sex, death, travel, war, violence… Every important narrative trope is included, and the passion and sincerity the novel’s characters feel for poetry is charming and, for me (who spends his entire life between paperback covers), recognisable. This is a serious and an involving novel, and I will certainly be seeking out more Bolaño if I ever make it back to the UK. God forbid. 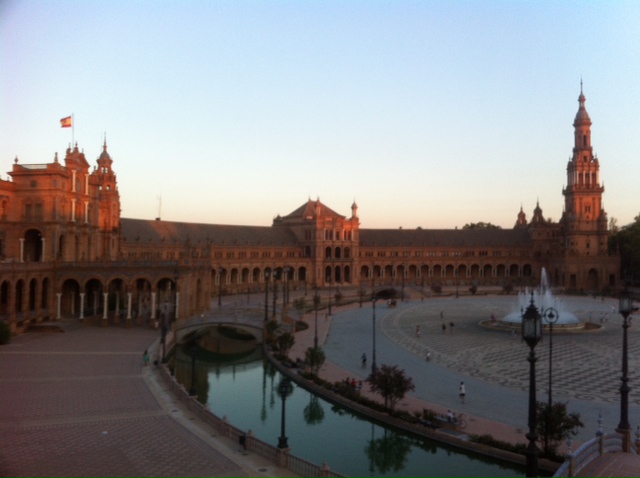 But what else have I been doing? Plenty of things! I have been to the Plaza de España, a huge 1920s structure built for a big international exhibition, I’ve visited Seville Cathedral (which is a UNESCO World Heritage Site, and though impressively big and basilica-y on the inside, its domes, flying buttresses and varied sculptures make it considerably more interesting from without), and I have climbed the Giralda.

The Giralda is a stunning Moorish tower, built in the 12th century as a minaret, but later appropriated as the Cathedral’s bell tower. Its geometric-patterned brickwork towers over Seville, it is by far the most striking architectural feature of the city, visible from all over. However, once up it, the view is rather disappointing – although Seville is a beautiful town full of very handsome buildings, the vast majority of them are all the same size… Meaning when a distance above them, very little can be seen except for roofs – which may be interesting (to some people) but are a poor reflection of the eclectic architectural diversity the city centre actually boasts.

Anyway, the sun will start to cool down soon. I’m going to do something else. Hasta luego. 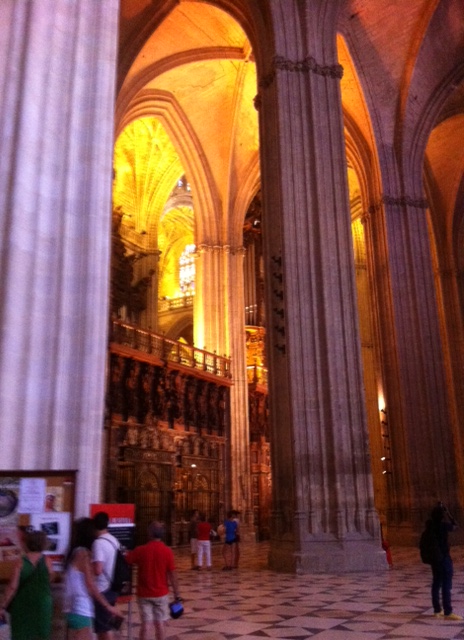 4 comments on “Hanging out alone in Seville, reading Roberto Bolaño’s The Savage Detectives”