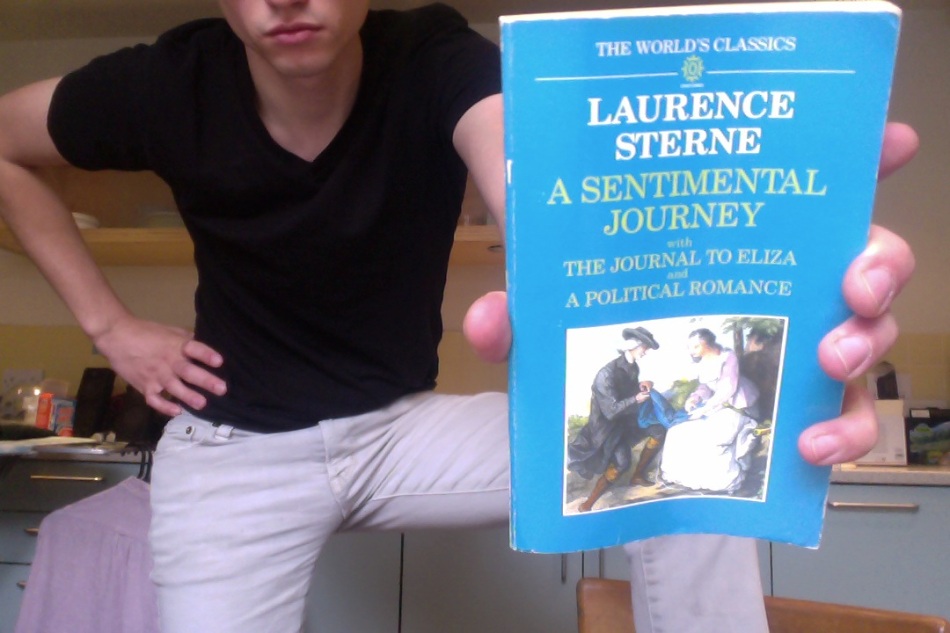 Laurence Sterne is the writer of the (rightly) famous Life and Opinions of Tristram Shandy, Gentleman. A hilarious and experimental volume about digression, smut, confusion, small-mindedness, class, intelligence and the varying priorities of people. It is a book that holds up to rereading now, and is genuinely (I laughed, if that counts) still funny.

A Sentimental Journey was to be Sterne’s next project, a novel of similar length about a “sentimental man” (Yorick, the village pastor from Tristram Shandy) going on a trip through France and Italy. Sadly, because of Sterne’s death, the book (and the journey within it) was never completed, with Yorick only getting about halfway across France. However, as (like Tristram Shandy) the book was published in separate volumes, the two that exist were essentially considered “finished” by Sterne. Which is good. Which is something.

A Sentimental Journey is a bawdy farce, essentially, about a lusty pastor denying his own lusts (to himself, one feels, rather than just the reader), who constantly ends up in strange situations gripping women by their hands and feeling deep love and empathy towards them. He is presented as a comic and confused character, and one does not get the impression that Sterne wished Yorick to be read as a disgusting, lying hypocrite, but rather as a figure of fun, ignorant of the desires which his body is CONSTANTLY making him act upon.

Which is funny, I suppose. There is also lots of confusion about where he is and how he is meant to behave in France. He is travelling without a passport despite England and France being at war, he has little money, he is obsessed with beggars, he falls in love constantly, he travels with a manservant hired in a provincial French village who appears to have no skills relevant to the tasks he sets him, he has no plan, he has no real reason or urge to travel, he condemns other people who idly travel whilst implicitly damning himself… It’s funny, I suppose, a good, early piece of travel writing that mocks the traveler without ever exhibiting any shared/presumed contempt of the foreigner. It’s rather like an 18th century Yoga For People Who Can’t Be Bothered To Do It, but with less exotic locations, less drugs and less introspection. Maybe, in fact, Sterne is nothing like Geoff Dyer. Hmmm.

This volume (as A Sentimental Journey is so short) also contains a couple of other works by Sterne. One, A Political Romance, is a very early work mocking some infighting amongst the Yorkshire ecclesiastical crowd he was a part of before he became literati, and thus feels rather dated and irrelevant. The other, though, The Journal to Eliza, is a semi-fictionalised (or not) diary kept by Sterne (where he sometimes refers to himself as Yorick)  during the last year of his life, where he writes about his slow physical decline whilst fantasising about a long and happy future with Eliza, the young wife of a man who lives in India. He knew her for only about a couple of months, then spent six months writing daily notes in his diary about her beauty, about how he’d told others about her beauty and about the life he’d planned for them both. He, of course, would soon be dead.

In The Journal to Eliza Sterne mocks his own accidental celibacy, the disappointment of his marriage, the pressure of delivering A Sentimental Journey to acclaim, but does not mock the fact that he is writing (unread) daily notes to a woman on the other side of the world. Whether this is how he actually felt or if it is an exaggeration for the purposes of comical posthumous scandal (which is the kind of thing he’d have liked), it does not detract from the fact that this is an engaging and entertaining and quite bleak portrait of a dying man falling in fruitless love for the very last time. I’d highly recommend The Journal to Eliza, though not over Tristram Shandy.

I laughed quite a few times whilst reading this slim, old, book, which was what I wanted. Next, I think, something sad…