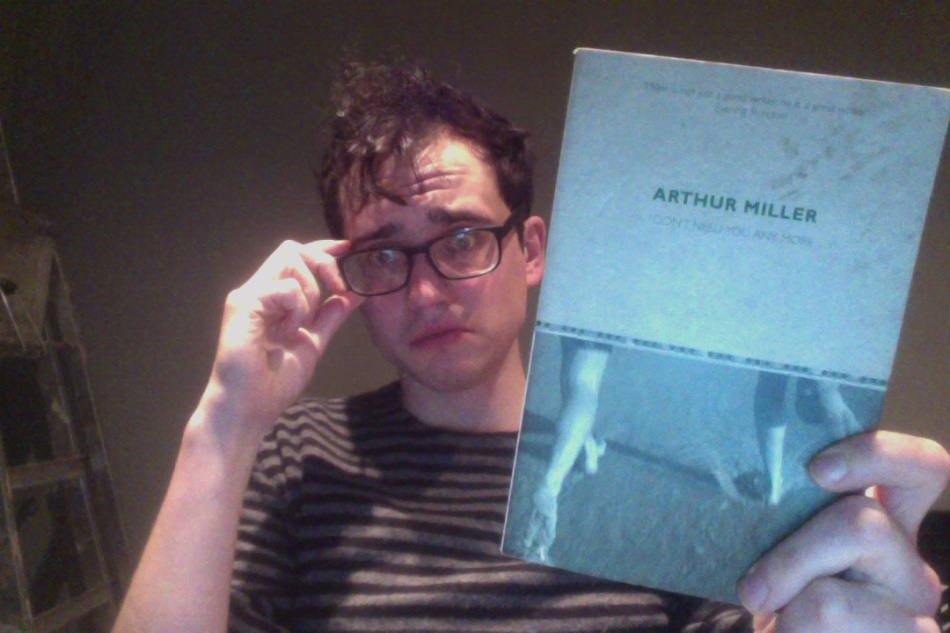 Arthur Miller’s 1967 collection of stories, I Don’t Need You Any More, contains one of the finest pieces of short fiction I’ve ever read. It is called ‘Fitter’s Night’. The other eight pieces in the book are varied, and usually perceptive to some extent, but this second-world war-set piece about a working class Italian American man labouring in a Navy Yard is an incredibly engaging, exciting and moving exploration of family, self-knowledge, greed, desire, regret, loneliness and pride. I’m shuddering still. I wrote the above before reading the final story in the collection, ‘A Search for a Future’, which was equally as haunting and heartbreaking. I’ll come back to these two, and cycle through the rest of the book first.

The opening story is the eponymous one, and I really didn’t rate it. It’s about a five year old child who speaks the title to his mother, and the fallout from her emotional response. It’s serious and quite tense, but written from a (loose) child’s perspective, so is deliberately veiled in terms of emotional engagement. I don’t tend to enjoy any fiction with children in, to be honest, and I know that’s a crass generalisation but I can’t really think of any counter-examples except for Knausgaard and Proust, which don’t really count because putting them together makes me sound like A PRETENTIOUS ARSE.

The lengths of the pieces in the book varied considerably, from a few pages to about 50. The four page ‘Glimpse at a Jockey’ is quite an entertaining piece about wealth and fame, whilst the not-much-longer ‘Fame’ treats the same topic with less humour, more self-awareness and (oddly) less shame. ‘Please Don’t Kill Anything’ was the third particularly short piece, and I felt it was one of the weaker tales of the book. It’s about a young married couple throwing discarded fish (on the woman’s insistence) into the ocean from beside a fishing vessel. Perhaps it’s meant to be romantic, but it felt a little “Aren’t women so sentimental and don’t they make men do such embarrassing things?” which isn’t the kind of Updike-y misogyny I enjoy in the fiction I read.* The other story I didn’t enjoy that much was the quite long ‘The Prophecy’, all about divorce and desire and boozing in a rural community of (quasi-?) intellectuals. It felt a bit too mid-20th century, I suppose, and not the best story about marriages breaking up from that period I’ve read. Also, Miller had a very unsticky narrative focus in that, which left a slightly disappointing ending, as all of a sudden the reader was within the consciousness of a completely different character. Still, it’s not the end of the world.

There were two I quite liked, but wouldn’t rave about. ‘Monte Sant’ Angelo’ was a short piece about a pair of American university friends touring Italy, one of them seeking his ancestors. The other, who is Jewish, is tense about the situation as the story is set after the Holocaust and he is painfully aware of what probably happened to his extended family in Central Europe. He is cheered, though, at the end of the story, when he meets an Italian who he is certain is Jewish. This story is one of the few that doesn’t necessarily feel tragic, probably because it has as its background such an awareness of such a serious tragedy, i.e. genocide. Miller evokes the hilltop town (which is real, in Foggia in Southern Italy) beautifully, the dust of the Mediterranean and the complex architecture. In ‘The Misfits’ he creates a very different landscape with the same aplomb – this is a story about three men chasing wild horses in a desert somewhere in the US. Here dryness and distance from the sea and society is emphasised, here the wildness of the horses (outsiders to society, like the men who chase them) is contrasted with the modernity employed (a plane, tyres used as weights, a truck) to cruelly catch the animals and sell them for chicken feed. The men debate loneliness, recall failed relationships (both romantic and economic) and seem to bond over a shared disapproval of each other. This feels like a Western, and the blurb on the back of the book states it was turned into a film. (Looked it up, well-regarded, might try to see it.)

The two best stories in the collection, though, were those at its end, and both were superb. ‘A Search for a Future’, which closes the book, is about mortality and death and made me cry several times. A middle-aged actor visits his dying father in a hospice, and sits beside him and thinks with regret about pretty much all the significant life choices he’s made. It’s very moving, all about fragility and decay and hope and the inevitability of death. My kind of thing.

‘Fitter’s Night’, the real standout piece, is about love and personal greed, also about regret, but regret not just for actions, but for the reasons for the actions, and not in a self-castigating way, but a way that offers hope. It is about making human connections when one feels ones life is over, about finding a purpose, however fleeting it is, because one becomes aware of being useful to someone else. It is about the loneliness of adulthood, but about the moments of mutual happiness that occasionally puncture it. It’s about work and sex and family and priorities. It’s beautiful, mesmerising, I couldn’t stop reading it, and although I read quickly that’s because often I want something to end; with ‘Fitter’s Night’ I just wanted to be within the narrative, within the story, within the night. Beautiful prose.

A mixed collection, but one with some truly marvellous writing. The only ones I didn’t really like were perhaps more to do with taste than quality, I don’t know. But ‘Fitter’s Night’ blew me away. Read it. Yes.

* Though, yes, I have been known to enjoy Fleming-y chauvinism.