Tbh this is more for me than it is for you. Ego building, innit.

I started 2017 feeling like shit, but trying to fix things.

I spent a lot of time during the first half of the year trying to give up alcohol, to varying levels of success. There were periods where I was teetotal for weeks, and periods where I was passing out on the floor for days in a row. In the end, things seemed to even out, and though I may have had a boozy Christmas, I haven’t had a boozy Summer or Autumn. It’s kinda under control.

2017 will be remembered as the weightiest of my many years battling (lol) mental health issues, because of the very serious suicidal breakdown that overtook me from May through August. This hard depression was compounded by the inevitable and long-foreshadowed collapse of my perennially near the rocks long term relationship, the demise of which was definitely “a good thing”, despite its timings and circumstances being about as bad (for me) as they could have been. But, hey, I got to keep the dog, so it could have been a LOT worse. (NB: I know some people object to the term “breakdown” on the grounds of it being dehumanising, but it’s a cliched metaphor that has become normalised parlance because – in my experience – it very accurately sums up what it’s like to suddenly, unexpectedly, not be able to do anything.)

So, my mind a mess, I spent the summer working in a pizzeria where I had to pretend that craft beer is more enjoyable to drink than wine (it isn’t), but where I also got lots of free kombucha AND – the most significant thing here – served a pizza to Timothy Dalton, who clearly and directly said “thank you” to me. (In other Bond-related-SMH trivia, I got a personal rejection from Pierce Brosnan’s agent when me and a friend emailed asking if we could interview Brosnan for a podcast.)

The year span on and my medicinal doses increased. I worked at Bestival and had a wild time and scored myself a hilarious anecdote that’s much better suited to someone a decade younger than me. I worked a lot at various events for various companies, got some more writing published and appeared as an interviewee in this episode of the BBC Three show Things Not to Say To:

AND in this episode of Leo X Robertson’s podcast Losing The Plot:

I’ve had several pieces of writing published at Queen Mob’s Teahouse: HERE’S A LINK TO THE ARCHIVE HERE and also pushed out a few more pieces for the Huffington Post – THIS IS THE LINK HERE – and Open Pen, as well as having a poem published online at Here Comes Everyone, a review for Sabotage, a review for Berfrois, and some print haikus included in 100 Haikus About Boris Becker’s Breakfast, a publication from Morbid Books. I also had an academic essay published in the B. S. Johnson Journal and I had my first extract of criticism included in the printed copy of a physical book.

I was shortlisted for Best Reviewer at the Saboteur Awards and I was included in Influx Press’ 10 Literary Heroes of 2017. I made an unsuccessful web series, Triumph of the Now TV, which allowed me the opportunity to meet some fascinating figures in contemporary literature and justified a bizarre, solo, driving holiday I took around the Balkans when things were just about to become too much for me to cope with back in the Spring.

I bought the gold suit you see in the picture above, I was interviewed for an article on Broadly, I’ve done a bit of dating and so far have no horror stories to tell from my experiences. I’ve discovered an uncontrollable love of the music of George Michael, I’ve been on holiday on my own again, I’ve kept working even when I could barely move through depression, I was prescribed valium for a crazy intense, crazy fun, week, I’ve cross-dressed again, I’ve walked and cuddled my dog, I’ve read some incredible books, seen some great cinema and television and – most significantly of all – I’ve realised and understood that my existence holds value for many people.

During the second half of this year, I struggled out of a terrifying depression that probably would have left me dead had it not been for the actions and love of my friends and family. I have never in my life felt as loved or as valued as I have over the past six months, I have been made to feel like a different person to the person I felt like for a very long time. I’m on a lot of medication, that is true, but I’m also surrounded by a sense of support and community that I never realised existed before. I used to feel like no one cared about me, like everyone hated me, like I was stupid and broken and fucked. I don’t feel like that any more. I have continued to work and socialise while sorting my head out, and I have now kinda done that. What I need to do next is sort my life out, which is gonna be a slog, but FUCK IT: I am Scott Manley Hadley, I have an adorable fucking dog and I’m ready for the future.

2017 ends with me feeling the happiest and most optimistic I have felt for a very, very, long time, and that is because of you, my readers and my friends, people who don’t think I’m boring, who don’t find my interest in literature a drag, who don’t wince when I publicly talk about my feelings, who want me to be happy because you don’t think I deserve to be sad.

I think 2018 will be fun. I’ve got some shit to deal with, but I’m not scared any more, I’m not worried. Who fucking cares if I’m a half-employed, bald, dog-owning, wine snob, vegetarian, hippy who’s really into literature? That’s what I am, y’know, so fuck it. Let’s sing and dance and work and read and write and love and smile.

Life doesn’t have to be shit. Happy New Year to all of you.

Here’s a meme I made summing up the progress I have made: 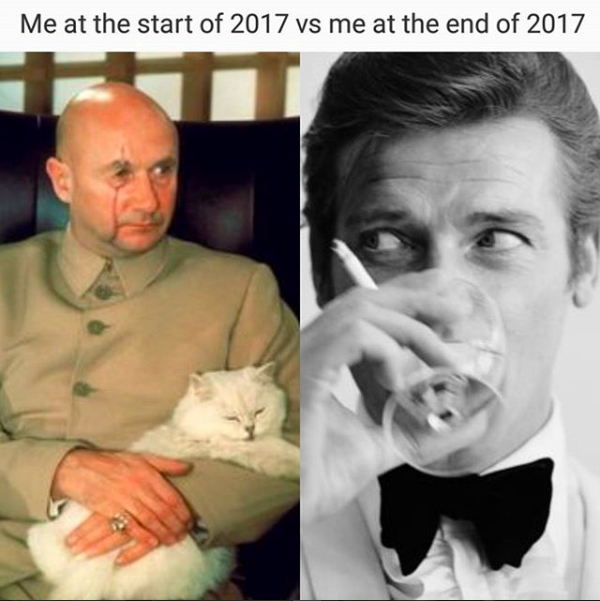