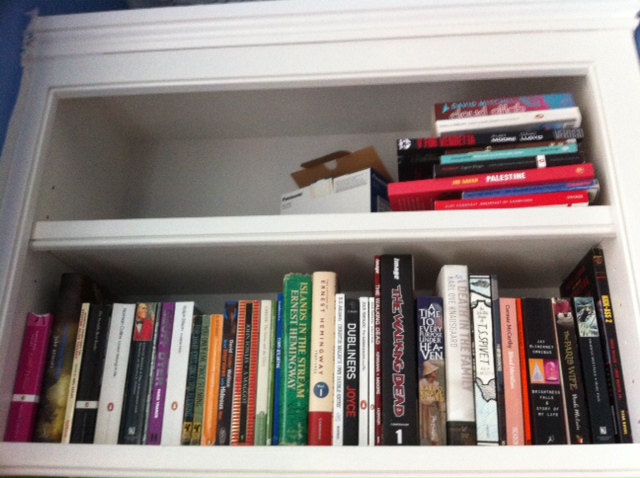 A Time To Every Purpose Under Heaven by Karl Ove Knausgaard

Kanusgaard is my favourite contemporary writer, entirely because of the book I will be reviewing next. This one, however, is about ten years old, and (until late April!!!) the only other translated into English. It is a messy, self-indulgent, postmodern exploration of the history of angels in religious and non-religious texts and art, encompassing long essays, heavy (and often fabricated) factual details and extended, elaborate, psychological re-imaginings of famous Biblical stories. For the first 500 pages. The last fifty, however, are about a depressed writer self-harming and -medicating on a barren island off the coast of Sweden, implying the rest of the book was a misguided attempt at repairing a broken relationship with an estranged father as the two of them once discussed a folk tale about angels becoming seagulls. It sounds silly. It sounds overblown. It’s both. But the coda made me cry and cry and cry. I fucking love Karl O. 8/10

A Death In The Family by Karl Ove Knausgaard

This is the book that changed literature. If you’ve spoken to me at any length since last Summer, I WILL have mentioned this. I’ve even done a video review:

My book of the decade. This is what I’m aiming to match. 10/10 (Like Gault & Millau, a perfect score on this blog should be impossible. I have given it here because this is the PERFECT BOOK.)

The Selected Works of TS Spivet by Reif Larsen

This is a visually beautiful book, filled with charts, maps and illustrations to accompany some frequently charming, often heart-breaking prose. Although it looks great the whole way through, the plot kind of dies in the middle. Which is such a shame, because when it works, it’s breathtaking. 7/10

A comic book compilation of short stories. Some were good. All were short. I’d probably buy another. 6/10

The Road is one of my favourite recent books, but I haven’t loved anything else of his quite as much. Until this. Unrelentingly violent and bloody, rich in historical detail, deeply involving, horribly emotional and nasty and disturbing and oh just PAINFULTOREAD sometimes, this was a gem. A horrible, cursed, nasty gem. 9/10

The Pillowman by Martin McDonagh

Mr In Bruges‘ last play before he became Mr In Bruges, this is a chilling but also very, very funny, dystopian, piece. Unnerving. As with all of the plays I mention, I haven’t seen it. But would like to. 7/10

The less good Bret Easton Ellis (back then) writes a surprisingly mature book about the publishing industry, boom and bust and a relationship damaged by financial greed. Like all of his that I’ve read, clearly meant to be didactic. Alright. 6/10

Story of my Life by Jay McInerney

Shit, short, and about a character Bret made up. (Part of an “omnibus”/stuck in the back of the above. Thankfully, I did not pay for this.) 3/10

The Paris Wife by Paula McLain

A fictionalised account of Hemingway’s first marriage from the perspective of Hadley, the wife. (SHE SHARES MY NAME.) 400 snappy pages detailing how much of a shit Ernest was. Paris, Pamplona, the Mid-West – it’s a sometimes fun, ultimately sad journey about the places and the people that become Hemingway’s first few novels. Not bad. 7/10

This is fucking brilliant. I don’t dabble with the 19th-century perhaps as much as I should (all boring tho, innit?), and this came as a pleasant surprise. Full of genuine information about whales and their relationship with humanity throughout history, this is an utterly engaging tale about determination, blind aggression, stupidity and the inability to recognise the untenable powers of nature. 9/10

My sister got me this for Christmas. It was shit. I’ve never read the first one, but I’ve seen and enjoyed the film. This is nastier, bloodier, crueller and much less funny. Thinks it’s cleverer than it is. The worst comic book/graphic novel I have ever read. 2/10

Great fun. But not literature. Thrilling, entertaining, silly, over-the-top, funny, engaging, exciting, but frothy. So frothy. Interlinking stories that don’t interlink enough to make a satisfactory whole, on their own, they work great. Really great. As a “concept novel” it’s a pile of crap. BUT FUN. If you don’t care about feeling like a moron, go for it. Although, if you aren’t particularly literary and want to read a “difficult, clever, book, yeah” THIS IS FOR YOU. I’ll probably give it to my mother for her birthday. She reads like one book a year. 7/10

Love In a Cold Climate, The Pursuit of Love and The Blessing by Nancy Mitford

I raced through this compilation of short novels last summer, so the three have merged, unfortunately. However, bloody loved it. Mitford’s hilarious. Like a funny, emotionally mature, well-written, interesting, enjoyable, PG Wodehouse. (It’s about posh people but not shit.) 8/10

V for Vendetta by Alan Moore and David Lloyd

This is the only book by Alan Moore I’ve read. And in its seriousness, tone and use of character development (in a comic book, no!) it was a cut above what I went in expecting. Particularly after the recent wasted paper that was Kick-Ass 2. Dark, brooding, serious, sad. I enjoyed. 8/10

The Fuck-Up by Arther Nersesian

This was rubbish. Picaresque “falling apart” novel. But the writerly aspirations of the protagonist pissed me off. I hate novels about writers (except Cakes and Ale – which is bloody brilliant, 8/10) Punch me if I ever write one. 3/10

Down and Out In Paris and London by George Orwell

This prose poem was enjoyable, the whole “superfluous man” aesthetic of the Russians is something I like. Contemplation, pointlessness, the wish for action, love, something, life. Jolly good. 7/10

The most serious non-fiction book here. Fascinating and horrific in equal measures. Plus, because it’s a comic book, I had very detailed Gaza Strip-set dreams for days afterwards. That is not its only strength. I learnt a lot. A very personal exploration of a very oft-discussed topic. 8/10

The Hundred and One Dalmatians by Dodie Smith

Good fun. Not as great as I Capture The Castle, but enjoyable. Cruella de Vil is ten times as glamorous, ten times as sexy and ten times as cool as Disney made her. Nice little piece. But for children. And there is an ACHINGLY non-secular scene in a church that almost made me vomit. 6/10

Breakfast of Champions by Kurt Vonnegut

My kind of thing. I suppose. Funny, playful, self-indulgent. I like self-indulgence in literature. (Wait until you read some of my prose.) This was fun. Well-plotted. Not as serious as some of his stuff. And wonderfully angry. 7/10

That’s it for the past. From now on, more detail. More books.