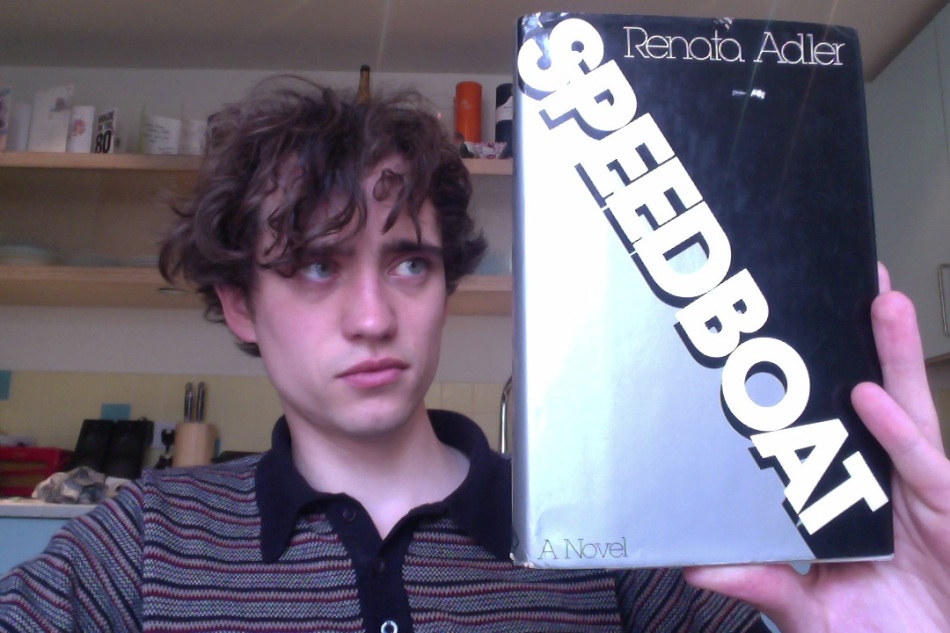 Renata Adler’s Speedboat is an award-winning experimental novel from 1976, recently republished by New York Review Books. I, however, was reading a lovely first edition I bought for only three pounds whilst in Hay-on-Wye a few weeks ago. Bunga bunga.

The novel is a loose, fun, fragmentary look through the world of academia, journalism, politics and the glamorous New York-based, global-playing jet-set of the 1970s. The main character (who I believe is autobiographical) writes for newspapers and magazines, lectures on film and drama, dates congress candidate campaign managers, holidays in the Caribbean, the Med, regularly travels across the US, goes to dinner parties, arranges dinner parties, takes flying lessons, plays in speedboats, writes, thinks, makes friends, drinks, eats out, gets bored at operas… Although the novel is ostensibly split into seven distinct chapters, the sense of meaning/time/place changes – often dramatically – every time there is a double space break. Some sections are only a short sentence, others cover a couple of pages. Some are snippets of dialogue, others philosophical self-reflection, some are reported anecdotes, things (one imagines) the protagonist is writing about within her capacity as a journalist.

Structurally, I suppose, it could be compared to Stevie Smith’s Novel On Yellow Paper (review – HERE), but in terms of content, style and intention it is quite different. Whilst Smith’s novel seeks to describe the development of social consciousness during the build-up to the Second World War, Speedboat is instead much more an attempt to capture a life, a personality and a time in a more specific and less politicised way. Yes, politics are discussed, politicians and diplomats appear… but there is no overwhelming moral to the text. That’s not what it’s about at all. Any opinions expressed in the novel are there as a tool to facilitate a reader’s deeper understanding of the characters, not to convince him or her to think in a certain way. I think.

I enjoyed this, and I think reprinting it is the right thing to do: as a period piece evoking glamourous pre-Disco 70s, it’s great; and as an intelligent, experimental novel, it succeeds utterly. And, of course, if it becomes incredibly culturally significant, this £3 first edition could make me lots of money. Ha ha ha.

0 comments on “Speedboat by Renata Adler”