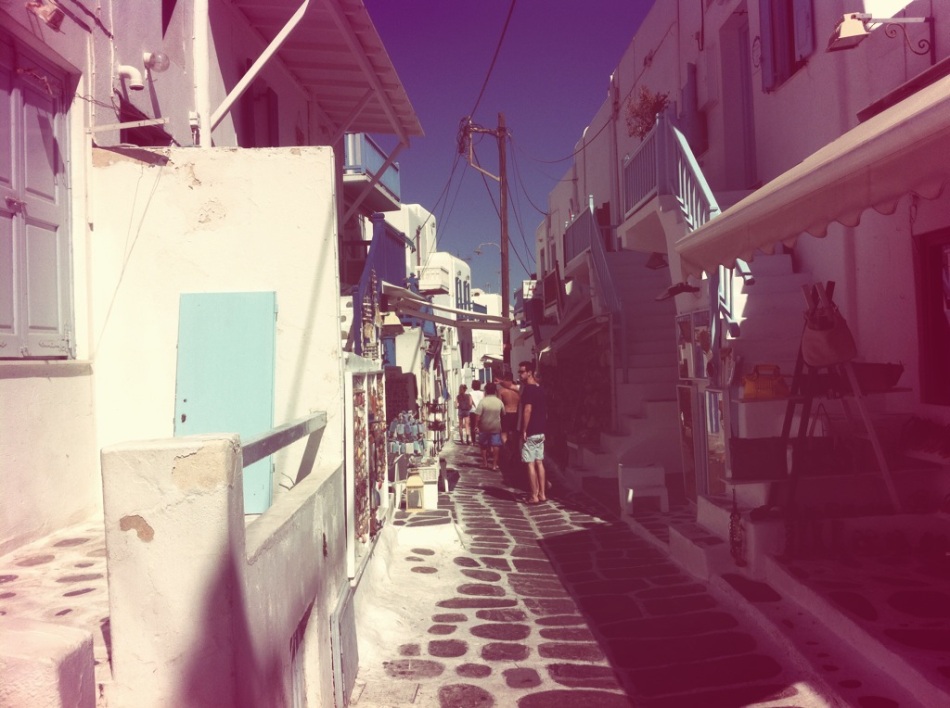 For it has come to pass that the dream, the Summer, is over, the come down begins. I was appropriately hungover as I journeyed homewards, having left my final destination, the wonderfully gay island of Mykonos, more than a little worse for wear.

I spent a full day and a night there, escaping the lovely, relaxed, Paros on the first ferry of the day. I arrived, tired, and upgraded my hire vehicle to a cheap Chevrolet. Which was a stupid idea. Most of the roads on Mykonos were the width of a single car, with head high stone walls on either side and a driving population of confusingly aggressive speeders. At one point I drove five miles down a tiny road I thought would lead to a beach that instead faded away in the middle of a half-built clifftop villa complex. Frustrating. I angrily pissed into the wind, hoping for the arrival of a prudish military helicopter to kidnap me away from the eight point turn I had forced myself into. But no luck. I was too close to a nudist beach for that. There was nothing I could do to get to safety other than drive back and forth making tiny turns each time as I gritted my teeth and tried to hide the damp patches on my trousers from my ladyfriend, who was sat in the car.

Mykonos Town is a charming little place, visually, tiny little streets between white buildings, blue-doored, lots of nice cafes, bars, galleries, restaurants, museums, shops, hotels, etc etc etc. It’s busy, in short. A vibrant, night-spotty place. The Greek Ibiza*. So after more perilous driving around the beaches of the island (rammed), the female I was with (the same one I was with earlier) persuaded me that we should ditch the car early and “go party”. I was unconvinced. But then, as I prepared another reversing manoeuvre I lacked the skill to complete, this time close to the water itself, a group of three self-described “middle-aged queens” approached my gold Chevvy and asked if I was a taxi (‘No’), if I was gay (‘Sadly not’, nodded at my girlfriend), and then if I would drive them to Mykonos Town for ten euro (‘Abso-fucking-lutely’**). They squeezed into the back, my girlfriend slouched into the passenger seat.

They chatted and flirted and laughed and had a wonderful time in such a way that I genuinely feel too much liberal guilt to write down much of what they said for fear of appearing to stereotype. They gave me some celebrity gossip, they told me I looked like Justin Bieber (‘No, like Harry Styles, Harry Styles’ my girlfriend wishfully drawled), they invited me for cocktails, they told me that all gay men are rich, they paid me ten euros and I dropped them in the middle of a road and caused a pretty large tailback due to my inability to steer well enough to allow cars to pass.

I was in a better mood. I consented to trying the nightlife. I was taken to a consciously Ibizan sushi restaurant, drank a lot of sake. Drank a big cocktail. Rushed to the bus station for the half eleven bus to Cavo Paradiso (the beach club we’d selected), missed it, went for a cocktail, took too long and missed the next bus, had another (shorter) drink, got on a bus and arrived at a nightclub in a cave. We had shots and spirit and mixers, switching down market to vodkaredbulls a little after one thirty. Drink after booze after drink. I was dancing on tables, dancing on the floor, busting the Macarena out to techno remixes of Blurred Lines, I was belching into empty glasses then vomiting into toilets, I was back on the dancefloor, back at the bar, attempting to break dance, doing that dance move I do where I grab my head with one hand and my foot with the other, bend a knee, and spin round in a circle. I was busting moves, I was lost, gone, boozed up. Then it got later – I wasn’t sick again, we got a bus into town, ate some chocolate crepes, seeking a bar open and serving past four thirty with lights bright enough for me to notice through the alcosolo haze.

We arrived at the hotel around five, I passed out (managed to undress first), woke up in the morning and managed to make it back to England without throwing up inside the beast of an Easyjet. It was close. But I made it back. And all I have to show for my six weeks away is a smaller collection of clothes, some comically prominent tan lines and (I’m pretty certain) worms inside my anus.

*This is a comparison openly encouraged through the sale, throughout Mykonos Town, of garish T-shirts that read “MYKONOS FUCKS IBIZA”. As my girlfriend repeated, with more venom and frequency as the night progressed, ‘I bet there aren’t t-shirts in Ibiza saying “Ibiza fucks Mykonos”.’ Quite.

**Of all of the many things I lost in my luggage in Africa, the item of clothing I’m most upset about is a recent purchase from Ohh Deer, a t-shirt reading in huge letters “ABSO-FUCKING-LUTELY”. Gone. And I feel like garish slogan t-shirts aren’t quite things people of my age can justify buying twice… This t-shirt: http://ohhdeer.com/product/absofuckinglutely-mens-t-shirt ISN’T IT FUCKING EXCELLENT???