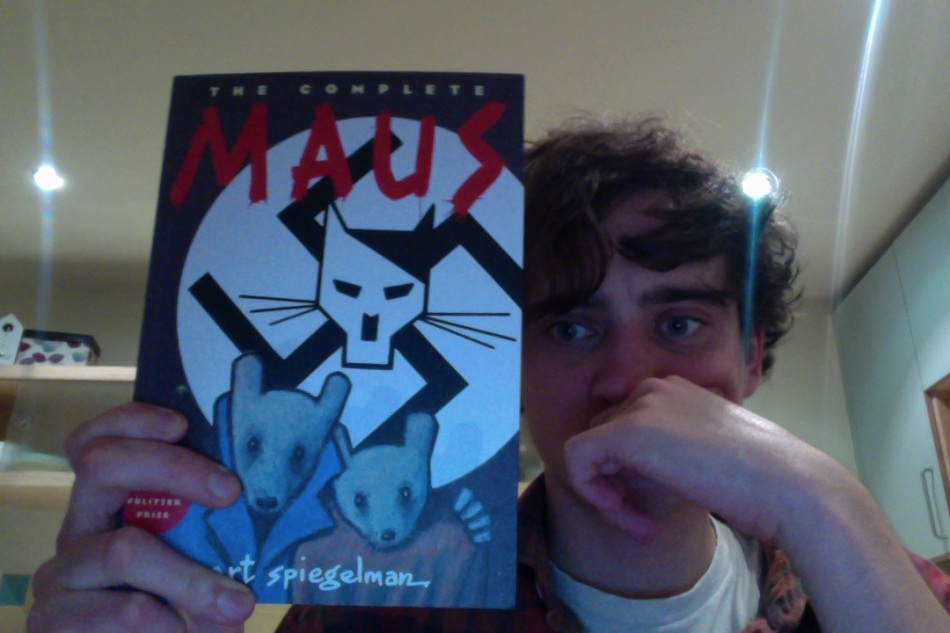 Art Spiegelman’s Maus is famous. And serious. And acclaimed. And important. And canonical. And worthy. There is very little I can say that hasn’t been said before, and very little weight attached to my voice when I repeat that this is an important book and one worth reading.

I like good graphic novels, and this is famously THE graphic novel about the Holocaust. It won a special Pulitzer Prize. In American letters, there is little higher approval than that.

Maus is the story of Art Spiegelman’s father’s experiences in Poland, as a Jewish person, during the Second World War. He was wealthy, resourceful and fiercely intelligent – multi-lingual at the start of the conflict, and rapidly versed in all manner of trades by its end. He survives because of his ingenuity, so though the horrors that he witnesses and experiences are awful, they are never as bad as the worst experiences of others, because he is always able to secure extra food through his charm, his intelligence and his diligence. As a reader, this does mean one is very, very much rooting for Spiegelman senior as he tries and tries and tries to remain healthy. He is loyal to his friends and family, he is a good man. He never loses hope, which is important, I suppose.

The book is heavy, it is horrific in places – but in reality it was… any words I can use will never be strong enough. Which is why Spiegelman chose to use pictures and metaphor. He tells a deeply serious story in a respectful and evocative manner. The parts set in “present day America” – the 70s and 80s – where he hears the story, ground it incredibly significantly into the recent past. Which it is. My grandparents were born just before/during the war, meaning their parents would have experienced it first hand. This is something that is often forgotten – 70 years is not a very long time.

Obviously it’s worth reading. And it addresses, within, the issue of people feeling saturated by discussion of these ideas. The Holocaust was real and horrible, and it isn’t a bad thing to be reminded of the depths “modern” society has sunk to so recently.

0 comments on “Maus by Art Spiegelman”