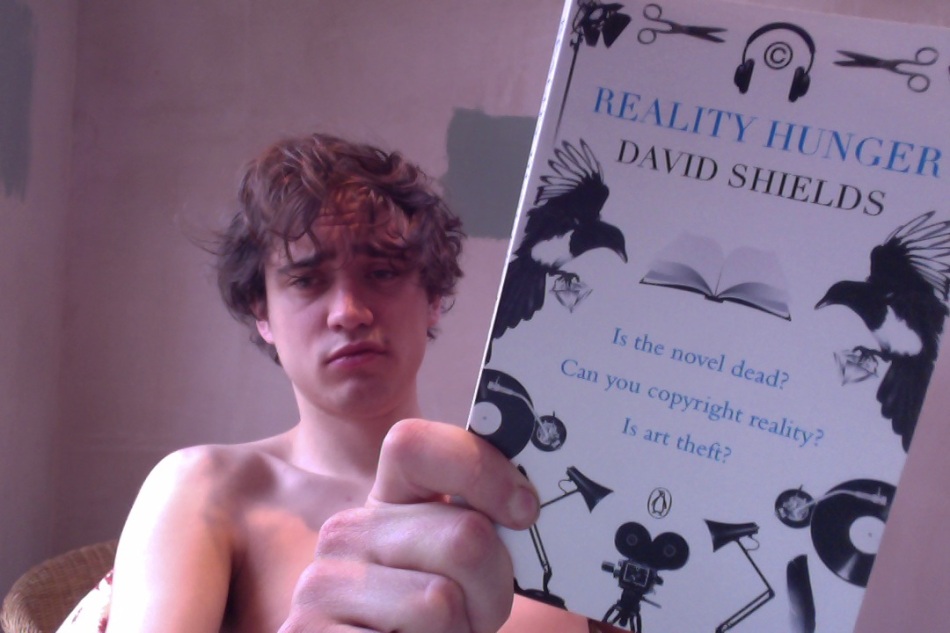 David Shields’ Reality Hunger is a non-fiction book about the fictional and the unreal being dead to contemporary creativity.

It poses that the general public have tired of artifice – people hunger for reality,  or, at the very least, the illusion of reality. He writes about the rise of hip-hop, of memoir, of reality television. He writes about the need for Truth in art, and he conveys this new manifesto in an exciting and utterly contemporary way.

Reality Hunger is composed almost aphoristically: it contains 618 sections – some a few words, others a few pages – each making a succinct point about Shields’ message. And it is a message that I am fully on board with. Most people I speak to about books will know that my three favourite writers are Karl Ove Knausgaard, B. S. Johnson and Jack Kerouac* – writers who have written about their own lives in a detailed and often invasive way. I love too Sylvia Plath, Malcolm Lowry, Geoff Dyer, Sheila Heti, the Isabel Allende memoir I read last year – recently I have come to only really LOVE books that are about real life, or at the very least engage directly with the notion of truth and fiction. My favourite Hemingway is A Moveable Feast, I prefer Signifying Rappers to everything else (bar Infinite Jest) that David Foster Wallace ever wrote – I want honesty, I hunger for reality – I am the exact kind of reader this text is ABOUT.

Shields writes too about the rise of copyright laws and how this has stifled creativity: his book, huge chunks of which are revised, reworded and edited quotations, he had intended to leave without any acknowledgements. And the ones that are there – at the instruction of his publisher’s lawyers – he encourages readers to cut out, even offering a dashed line at the centre for ease of snipping. He believes that all words, melodies, images (still or moving) should be available to all other creatives in order to allow the liquid reuse and reimagining of all art. Like Tristram Shandy.

Reality Hunger is a powerful, thought-provoking and (for me) reassuring book about the forward movement of contemporary literature, art, film, television and music, a thrusting manifesto promoting the integration of art, the freedom to create with whatever is available and the rising need and desire amongst the general populace for an awareness of the lives of other people.

A stonking, charming, hair-raisingly YES-SHOUTINGLY OPTIMISTICALLY FUTURELOOKING GEM of a book. Read it.

This morning, I read it instead of getting dressed. YES!

* Though, as I feel I always have to point out, Kerouac was a terrible human being and my approval of his literary intention is NOT the same as me liking his misogyny or personality.