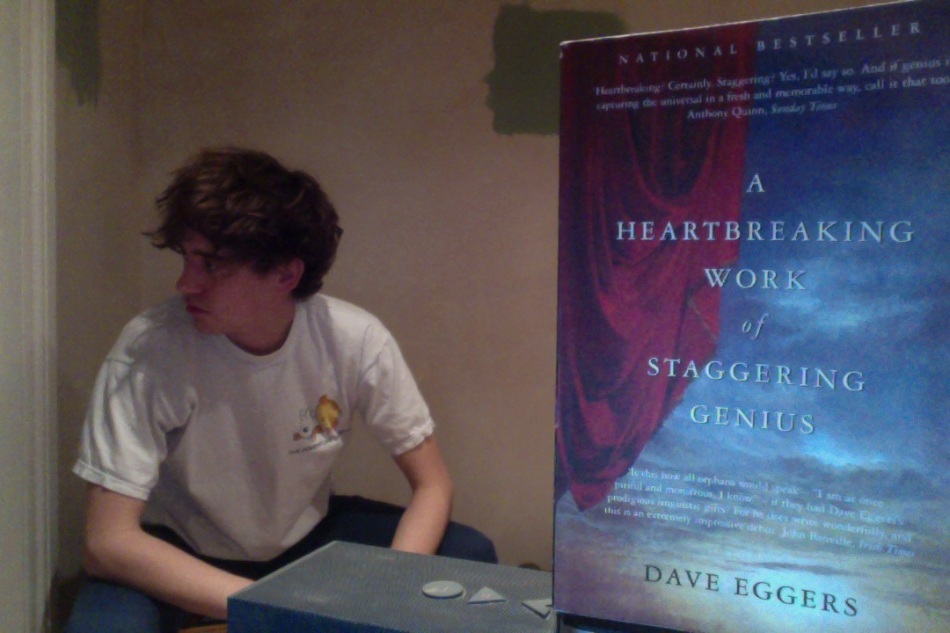 I really really liked this. That’s what I’m going to open with, because everything of any wit or interest I can think of to say about Dave Eggers’ A Heartbreaking Work of Staggering Genius will imply that I didn’t. But I did. It is the kind of book I love to read, the kind of book I aspire to write, and the kind of book that I will relentlessly recommend to people for the next few weeks. But despite that…

I’m going to pose and then answer some questions. I wrote approaching 6,000 words this afternoon, so my writing fingers are a little tender, but in SPLURGE mood. Here we go…

Q: Was it heartbreaking?
A: Yes, I suppose so, in places. The book is Dave Eggers’ memoir about the death of his parents (both died of cancer within a couple of months of each other) and his drastically-altered life that followed – not because he was all alone as an orphan, but because he became the guardian of his younger brother. He is about 21 when his parents die, Toph, his brother, is seven. The seriousness and continual difficulties of this situation are made clear during the first hundred pages or so of the main part of the text (see my answer to question two), and whilst reading that part my heart was broken over and over again. I cried a lot. But once Toph and Dave were established as a unit, once Dave’s career got underway, I felt (really) that the pressures lessened. The pressures then became outside, broadly unrelated factors – the accidents and mental health issues of Dave’s friends. Which were all interesting, and good to read, but the initial heartbreaking rush of the opening of the narrative did not recur. But I loved the book, don’t think I didn’t.

Q: Did it exhibit staggering genius?
A: If one googles “staggering genius”, this book is the top hit. Let’s make that clearer. If one asks the internet for staggering genius, Dave Eggers is the ANSWER. He is officially a genius, by 21st century trial by google. Hmm. But, yes, again, the book is cleverly put together. It is self-aware and frequently discusses itself as an ongoing narrative, with characters sometimes eschewing characterisation in order to offer Eggers the chance to directly debate his thoughts and feelings with a second voice. The text makes suggestions for its own improvement, changes form a few times, and the opening 60+ pages are stylised as Prologue and Acknowledgements that offer a deep and difficult introduction to the themes and ideas within the book. One feels expected to read these before the body of the text, but they are dense, and I started the book fearing for my intellect. Eggers is clever, yes, but he is at his most urbane and most clever in the sections that precede  the real body of the text. Which is OK. It’s an intelligent book without being intellectually overwhelming. Which is good. Because this book is good.

Q: Does it work?
A: Absolutely. Yes, yes it does. Although it is not the heartbreaking family saga it implies it will be at its opening, A Heartbreaking Work of Staggering Genius is an interesting and charming read. Eggers is a fun narrator, his voice is informed yet not formal, his successes are recounted with enough jocularity to avoid smugness, and enough awareness to avoid bragging. His literary life in trendy San Francisco is fun to read, fun to experience vicariously. And Eggers isn’t too wild, works hard, tries hard with Toph and is, 98% of the time, a thoroughly good person. Which is perhaps the tiny gap I felt the book lacked. There is no anger, no rage, no “why am I bringing up my brother, not my two older siblings???”. Now, it may well be that Eggers never felt that, in which case he is an even better person than I thought before. But it’s a big ask. He was years younger than I am now when he was given the responsibility of bringing up a child. I couldn’t handle it, and I know I’d be incredibly fucking resentful if the same thing happened to me. But I guess I’m a very different person to Eggers. Harrumph.

Q: Did you feel there were serious cultural differences between you and the narrator that perhaps marred your understanding of his mentality?
A: Oh god yes, thanks for asking that, I wasn’t certain how to crowbar this in. Essentially, Eggers’ attitudes towards sex and drugs are the complete opposite way around to the ideologies I have grown up experiencing over here in England.

Q: You mean the British want none of either?
A: No, I mean that both are the other way around. In England, everyone’s wasted all the time, whether it’s booze, coffee, fags, speed, smack, marijuana, pills, coke, acid or shrooms. Everyone is always wasted, and that’s fine. Everyone’s boozing, even the anti-drugs lobbyists have alcohol offered at their receptions. Inebriation, I feel… I feel I have been raised in a culture where inebriation is A OK. Because the only person you are hurting is yourself, and the absolute worst thing that can EVER happen if you take too many drugs is that you’re incredibly sick everywhere, or say something stupid. I don’t know anyone who’s ever died from drug use or drinking, and I’ve never even heard of it as second hand news. It doesn’t happen.* Whereas sex: Sex can cause pregnancy, AIDS, emotional problems when partners approach it with differing agendas… Sex always involves two people, it is always a public act, thus more likely to create/cause shame/guilt/regret. Eggers, however, despite his constant drink-driving (which is never apologised for) is firmly anti-drugs, despite his very relaxed attitudes towards casual sex. HELLO! I kept screaming at the book, Why are you sneering at the drug users yet relentlessly seeking meaningless sexual connections? Isn’t that the wrong way around?

Q: And you really think this is a British-American cultural difference rather than a result of your own sheltered, yet alcoholic, coming of age in rural England, Scott?
A: Yes I do. I have never asked anyone British if they would rather be sober or celibate forever and had “sober” as the response. I rest my case.

Q: How relevant was this to your understanding of A Heartbreaking Work of Staggering Genius?
A: Not very. I just wanted to write something about this and couldn’t work out where to do so.

Q: Oh. But you liked the book, though?
A: Very much so. A great memoir about family and being part of the Californian in-crowd in the 90s.

Q: Generation X?
A: Yes, only the x in Eggers is very much just a letter.

* I’m SO OBVIOUSLY being blasé here on purpose.