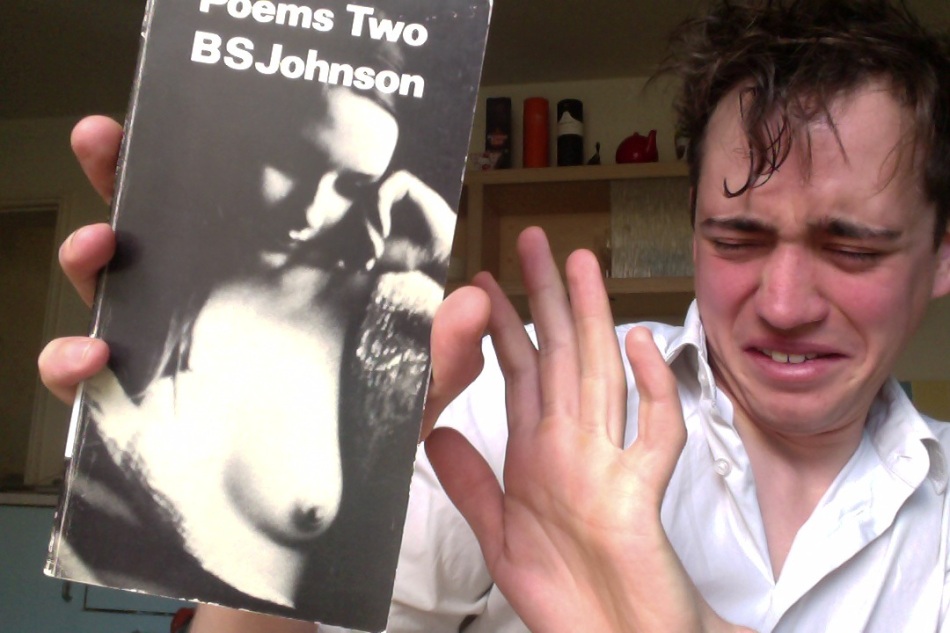 I love B. S. Johnson. He is one of my favourite writers. The Unfortunates I have read more than once and cried and cried and cried every time. As with Trawl, as with Albert Angelo and as with the film Fat Man On A Beach*. Elsewhere, I have marvelled at his aesthetic and theoretical ideas in House Mother Normal, Christie Malry’s Own Double Entry and Aren’t You Rather Young To Be Writing Your Memoirs? I have also read several of his out of print books, and all of them… well, all of them are out of print for a reason.

Johnson self-defined as a poet. Despite his successes with film, short stories and (of course) novels, it was poetry he saw as the highest of the art forms and the one he most aspired to be a master of.

This collection, Poems Two, contains poetry written between 1964 and 1971. They start with some of the last few whiney teenagey poems about that first girlfriend who “broke his heart” (not the language he’d use but very much the tone), a relationship he continued to write about until long after he was happily married. (Inappropriate, yes.) These are youthful and energetic, I suppose, and one of them ‘Bad News For Her Mother’ is a fantastically bitchy poem about his refusal to stop writing about his sex life with the daughter of a woman he barely knows. This opens the collection, and even this becomes self-righteous and self-important by the end. The idea, which is entertaining – “I can write about my former relationships however I want to” is the kind of honesty-in-writing that I approve of, but the closing to this poem invites too much pity. Which is not something I want to give.

And after a few of these there are some more general poems – a couple of good ones about a trip he made to Budapest to give a lecture, a flighty but interesting piece about his time on the trawler of Trawl, combining high poetic language with the grossness of fish guts… And there’s a great one, ‘The Poet Holds His Future In His Hand’ about contemplation of an ageing penis. There’s also a nice one about becoming a father.

But that’s it, really.

The poems are short and there aren’t many of them, and some are more jokes than poems. As the sum total of seven years’ work as a poet first and foremost (he claimed, though of course he wasn’t), this is not an impressive collection. It feels less like the best poems of that period rather than every scrap of undeveloped verse that could be cobbled together. Though there are, yes, quite a few that I liked, there were none in here that I loved. And Johnson’s work is something I usually very much enjoy, it’s just sad to accept that I’ve basically read all the good stuff now.

What is most haunting about this collection, though, is the final poem, ‘Distance Piece’. This is a sad, short (again) piece about the horrors of existence and the necessity to continue with life whether or not one wants to. Published about eighteen months before Johnson killed himself, seeing him write “the human condition is intolerable […] but one resolves to go on […] despite everything” knowing full well how little he was committed to this idea is unpleasant. For me, anyway.

If Fat Man On A Beach says anything larger than the truths Johnson directly espouses, it was that Johnson was still, in the weeks before his death, able to produce striking work of deep emotional resonance; rather than being a burnt-out failed poet-novelist (as Poems Two and the posthumous See The Old Lady Decently sadly lead one to believe) there was still an awful lot of literary value left inside him.

A tragic death. But here, alas, a mediocre set of poetry.

* Again, here’s a plug for my own Johnson-inspired confessional video, Sad Man On A Beach, viewable here: http://youtu.be/9J9Ic5OTybg (not a comedy)