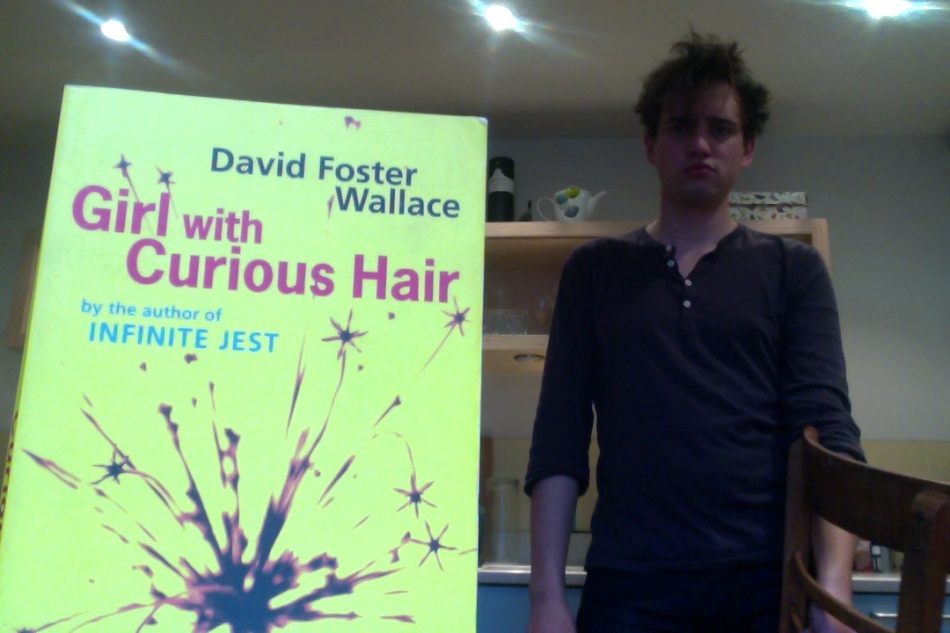 Having managed to twist two of the last three reviews I posted on here into David Foster Wallace hagiographies, I thought I should be true to my own words and have a read of something of his next. I picked Girl With Curious Hair, his first collection of short stories.

The book was originally published in 1989, a couple of years after The Broom of the System (an uninspiring first novel – not terrible, but not memorable – my review here) and five or six years before the HUGE Infinite Jest. The collection here includes ten pieces of varying sizes – from two pages to one hundred and fifty – and all but the title piece and the closing novella had been previously published in magazines. Those’re the practical details.

Within this book, though, is a very impressive showcase of the wide variety of Foster Wallace’s talents. There exists intense metafiction, traditionalist experimentalism*, stream of consciousness and “normal” (for want of a better sobriquet) prose fiction. There are searingly impressive criticisms of the nature of fiction, as well as thought-provoking considerations of many significant institutions. And it is, above all, very, very funny.

Though not everything is excellent and, yes, there are a couple of stories that disappear a bit too far up Foster Wallace’s arse to really be considered anything but “technically impressive” (and that said with a long pause before and a big sneer during), there are some real gems in here.

‘Lyndon’ is a fictionalised account of the life of Lyndon Baines Johnson’s chief aide; ‘Girl With Curious Hair’ is about a super-wealthy young lawyer with serious physiological problems attending a concert with a group of punks he’s befriended; ‘Say Never’ is an irritatingly successful mixed-perspective piece about a drug and sex-fuelled mid-life crisis; ‘Luckily the Account Representative Knew CPR’ is a short piece about a well-timed encounter in a corporate car park… I’ve realised I’m now going through almost all of them, so I’ll stop. There are a couple about the world of television that work quite well, too, and the novella, ‘Westward the Course of Empire Takes Its Way’ is a little bit bloated, but there are moments of sheer joy within it, particularly an extended section towards the end where a story written by a character for a creative writing class is discussed in detail. Maybe I enjoyed this due to my recent experiences in writing workshops, but I think not – I think it worked well as writing about writing.

Much like with Broom of the System, actually, I felt the best bits of ‘Westward…’ were those which involved characters telling stories. Foster Wallace somehow has (sorry, had) the ability to evoke interesting storytelling, the passing on of narrative, in an incredibly charming way. Filtering stories through several voices often fails as an idea, the falsity of reported anecdote, but when it is done well (think, of course, of Conrad’s Lord Jim**) , it can be an incredibly involving device. And DFW could do it, and he could do it very well.

Girl With Curious Hair is a great collection of stories – funny, moving, articulate, witty and impressive. Though lacking the grounding repetition of the transcripts of Brief Interviews With Hideous Men, I (personally) found it a more enjoyable collection due to it making me feel stupid far less frequently. Though that could just be that with two years and postgraduate education between reading those two books, I’m cleverer than I was…

I’d recommend. At some point over the Summer I’ll read some of his essays.

* By that I basically mean some of the stories are more “modernist” than “postmodernist”.

** I’ve picked Lord Jim because the narrator is far more of the story than in Heart of Darkness. Also, I think it’s still acceptable to like Lord Jim. Am I wrong?

0 comments on “Girl With Curious Hair by David Foster Wallace”