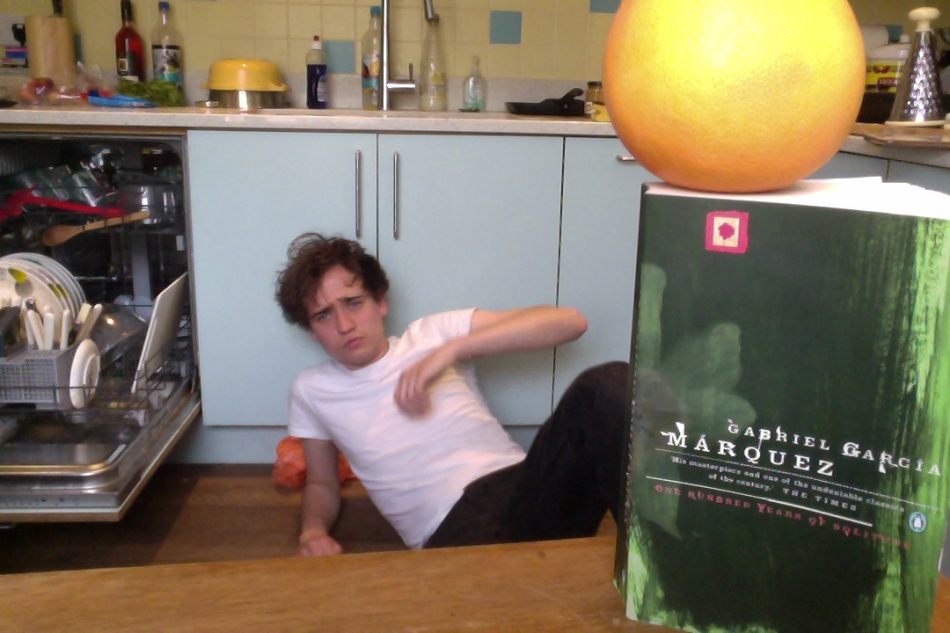 Over the last week I have slowly and laboriously read One Hundred Years of Solitude, the book broadly touted as Gabriel García Marquez’s masterpiece. Needless to say (as it took me a week and normally I read AT LEAST two books in that time), I was not blown away. But nor did I hate it.

I read this for the book club I attend, and pretty much everyone else there loved it. However, all the OTHER people I told I was reading it said the opposite, with “dull” and “dense” being the adjectives that kept reappearing. Now, I didn’t think it was dull, and I certainly didn’t think it was dense,  but I did feel it lacked a certain bite to haul my mind and my literary consciousness into the page. I’m going to go into detail.

The novel is, for those who don’t know*, a history of a large family (the Buendías) in a small town. It covers a little more than a century (about four or five generations) and is about the cyclical nature of human behaviour, the pointlessness of change and the hidden wish for stasis that forms the background noise to society. There’s a lot about sexuality, a bit about politics and science and money and travel and education… There are lots of “issues”, I suppose (it is a “serious” book), and there is also lots of symbolism and some magical realism which (to my surprise) I didn’t have much of a problem with. A lot happens, there are LOTS of characters (many of whom have the same name) and much discussion of the notion of “modernity”, as various ideas reach the out-of-the-way town before being subsumed, considered and ultimately rejected. There is a lot about change as inconceivable, a lot about “progress” being pointless (though, of course, change isn’t always good, that isn’t my opinion), and a lot about fate and people having a destiny – a defined and a set out life.

Which is something I don’t like. Obviously, within the confines of a novel, every aspect of every character’s life is constructed and defined and decided by an other** being, but in “real life” this is not the case. Of course it’s not. Don’t bother disagreeing. And in an (albeit stylised) attempt at recreating all facets of existence, I don’t expect it. The idea of people fighting against a destiny but being pulled back into it anyway is bleak and, in my opinion, a very old opinion to have. Everyone can change their lives in the modern. If they have the intention and make the effort.

One Hundred Years of Solitude ratchets along at a rapid pace, and I think this was the real reason why I didn’t truly get on with it. A lot happens, but nothing every really happens. And this is why I think others I spoke to found it “dull” – what it lacks is a change of pace, a change of tone, a zooming into a certain space or time or event in a slower (or a faster) manner to the general clatter of constant foreword momentum. It’s a runaway train of a novel, but not in a gripping way (I found), but in a way that rather lacks anything to alter the speed with which the book is read. One could say (and a member of my book club did) that there is so much plot that the plot becomes irrelevant, and the meanings behind narrative rise to prominence. But I disagree – if so much plot occurs, but so much of it is boring, isn’t that a literary failure?

A lot happens to a lot of people and only a handful of the events that happen to a handful of the people did I really care about. I liked Úrsula, the matriarch, I liked Pilar Ternera, the lover of many of the Buendía men who ends her 150ish years running a brothel with a zoo attached, and I liked Colonel Aureliano Buendía, the militant rebel who continues inciting civil wars until his 80s.

I laughed a lot, I found the book very funny. I also thought there were many striking images and many interesting ideas raised, but I found them to be raised in a way that I didn’t necessarily enjoy.

Stylistically, though, I suppose I liked it. I just felt that 400 plus pages of it was way, way too much. Also, it didn’t make me cry.

I’ll read more Marquez, as I enjoyed Chronicle of a Death Foretold when I gave that a go a few months ago, but this one I felt to be, for lack of a better word, very much overrated. Not as good as the accolades imply. I wouldn’t recommend it.

* Though everyone bar me seems to have already read, or at least tried to read, it.

** I was going to write “higher”, but I have too many literary aspirations and not enough self-confidence to do so.