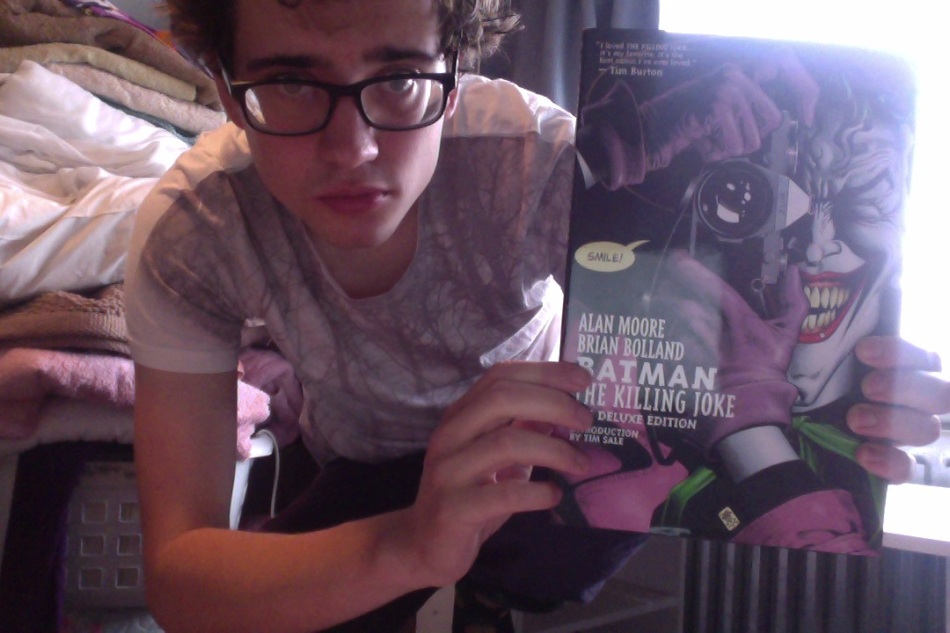 Due to a bereavement, I spent a lot of time with my family over the Summer, and one of the things we did to pass the evenings was watch the trilogy of Christopher Nolan Batman films, which none of us had seen.*

I realised, as I watched and really enjoyed them, that I had never seen any cinematic representations of Batman. I had never watched a Batman TV show, I had never read a Batman comic, I had never deliberately engaged with this “significant cultural figure” by choice**. Poor me.

The Killing Joke is short, though. Less than 50 pages. And packaged in an edition, here, with brief essays either side of it, both written by artists, who both make cruelly understated comments about their lack of writerly charm. They’re correct. Both essays are terrible. From Hell, for example, contains about a hundred pages at its rear, where Alan Moore describes in great detail the compositional and research process of the book. He is charming, informed and informative, and I had hoped for some of him outside of dialogue boxes here. Not the case.

The story is about the Joker. He escapes from Arkham Asylum, kidnaps Commissioner Gordon (disappointingly not Gary Oldman), shoots Gordon’s daughter in the spine then tries to turn the police chief insance by driving him around an abandoned fairground covered in photographs of his naked, damaged, daughter. Creepy. Batman arrives and saves the day. Done.

In its 40-something pages, though, the plot moves quickly, but very simply, forwards. There is a lot of discussion about the inevitability of the Joker and Batman’s mutually-necessary relationship, and quite a bit of pop-psychology about the meaning and causes of “madness”.

But it’s all just a little… flat. And undercomplex. And I don’t just mean compared to the Nolan films, I mean compared to the other Moore books I’ve read. And this, I think, comes from its size. Maybe if he’d had the nine hours to play with Batman that Nolan had, Moore could have achieved something as… big. But this takes a very short time to read, is engaging, but it’s not really as on-the-button-wow-this-has-changed-how-I-feel-about-the-medium as Watchmen, From Hell or even V for Vendetta.

Alan Moore, in his other books I’ve read, is great. Truly an impressive creative force. Here, though, it all seems a bit run of the mill.

Enjoyable, yes, interesting, a bit, but flat compared to what Christopher Nolan did with the character and what Alan Moore usually does with this genre.

* When an undergraduate/bartender, I went to see The Dark Knight after an early afternoon’s rum tasting session and passed out in the cinema. I was so confused and drunk when I awoke that I hated the film.

0 comments on “Batman: The Killing Joke by Alan Moore and Brian Bolland”