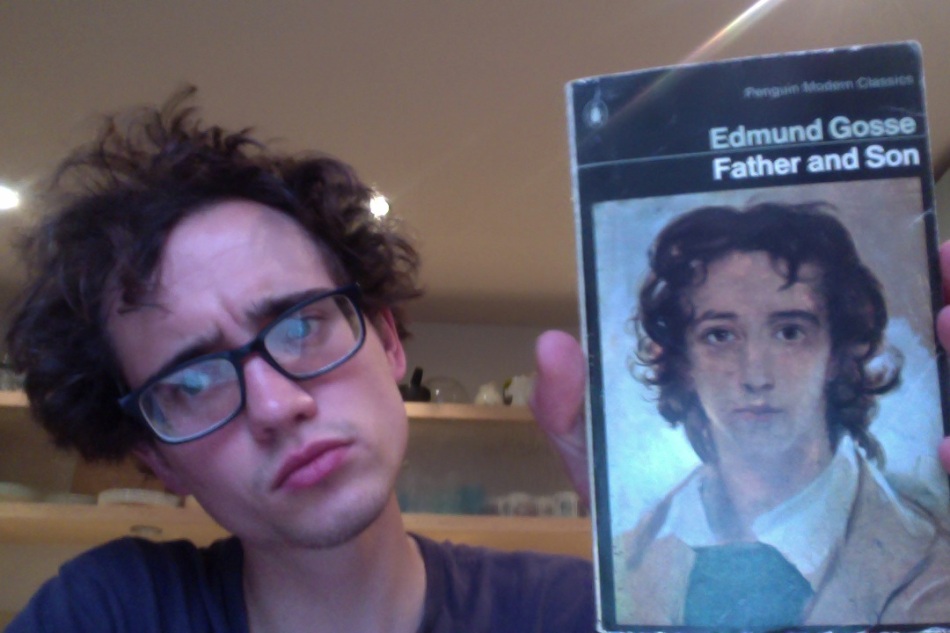 Hurray! I read a book at an adult speed for the first time in weeks, and this one I thought was bloody brilliant. Unfortunately, though, I’m too pessimistic and insecure in my critical faculties to state with absolute sincerity that I enjoyed this because it’s a great text, rather than just because it happens to chime with my own personal interests. Which it does. In a big way.

Father and Son by Edmund Gosse is the original all-about-my-daddy memoir. Published in 1907, the book focuses on Gosse’s life with his father, going from infancy up to his late teens, where he prematurely escaped the older man’s influence. The younger Gosse grew up to become a poet and critic, and Father and Son inevitably includes a lot of material about his falling in love with literature. These bits are a bit dull for my taste, and in keeping with this, I believe that not one other of Gosse’s many volumes of writing is still in print. What is interesting isn’t Gosse, it is Gosse’s relationship with his father, who comes across as a much more interesting and conflicted individual than his son ever does.

Philip Henry Gosse was a naturalist, botanist and marine biologist, who published many important scientific texts of the mid 19th-century. He was also a devout and extreme Christian who believed in the literal truth of the Bible and was a loud and vocal protester against the (already by 1907) broadly accepted theory of evolution. PH Gosse even went so far as to publish the serious tract on the matter, Omphalos, that (to simplify) originated the “God put the fossils and rocks in the ground to tempt us” theory. Actually, that simplification is unfair* – PHG posited that his god made the Earth look older than it was not as a temptation, not as a trick, but as an aesthetic decision. The man was a big fan of geology and couldn’t correlate the evidence of his scientific knowledge (“this looks like it must be millions of years old”) with his literal interpretation of the Bible (“the world is 6000 years old”), without the wrong idea breaking. The world, he believed, was created as it stands, relatively recently, and no matter how much physical evidence appeared to the contrary, he would not back down because of the words in an old fucking book.

PHG was intelligent and curious – he wrote and illustrated a great many books about sea life, basically invented the aquarium, gave many popular and populist talks about biology, he chatted about murders with his son, he liked poetry, singing, he married twice so probably wasn’t a lustless statue, but what pushed him through life was a growing and overwhelming faith, which jarred against his son’s more modern sensibilities. Edmund wasn’t allowed novels, was expected to worship and pray like an adult from the age of ten, was unable to socialise with children his own age until he was about 15, learnt very little about anything other than religion, geology and biology until he was pubescent, and ended up sneaking into hedgerows to read literature once he started getting pocket money.

The book is interesting in its examination of extreme religiosity, but what is most unsettling is the tone (not just of Gosse’s lightly purple 1907 prose, but also of the very reactionary 1973 blurb on the back of the book) that presumes this kind and style of belief is alien to the reader. Whereas, now, this is religion – religion, when publicised by people in the modern age, it  like PHG’s. It defines every moment of a life and every element within the world. Reading Father and Son as a 21st-century reader who has learnt about Islamic radicalisation and the Creationists of the USA, I thought PHG’s faith felt quite relaxed. He wants his son to be godly because he wants him to be godly – he doesn’t hit him, he doesn’t burn more than one book**, he doesn’t lock him in rooms, and once Gosse leaves home, PHG is disappointed rather than devastated when his son moves away from their religious methodology.

PHG comes across as a tragic figure, his flaw being his religiosity***, which forces him to miss out on appreciating the exciting scientific developments of his age and losing all of his friends. But his tragic flaw could equally be defined as an excessive love of his wife, for it was her deathbed wish that he raise Edmund within their church that (perhaps) led him onwards. Whatever the source of his behaviour, though, it would’ve been horrible being his son,.

Gosse’s prose is light and inviting, he feels honest and he feels fair. Though this is, essentially, a book about how close his dad came to fucking him up, he doesn’t write PHG as a villain: there is respect and there is a tinge of sadness, too – Gosse clearly sees how much happier both he and his father would’ve been if all the god stuff had never happened.

A beautiful memoir, a lovely little book. I’d recommend it to anyone interested in life writing, paternal relationships or attitudes towards religion of the 19th century. I’m going to end, uncharacteristically, with an extract from the book

* As too is the blurb of the 70s Penguin edition I was reading, but I’ll come to this later.

** Though it was Marlowe, which hurt.

*** Exactly like John the Baptist in the novel that I’ve pretty much finished working on. Wanna publish it? Anyone?

2 comments on “Father and Son by Edmund Gosse”