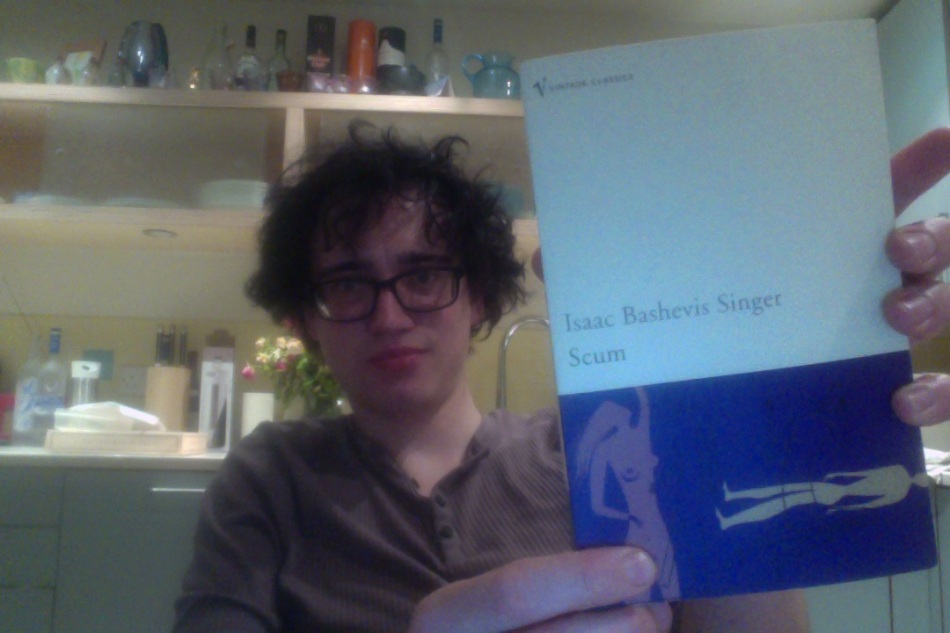 My pile of books, towering as it often is in January, needs to be got through. So in order to help myself make it look less challenging, I plan to read only books less than 250 pages long throughout January, and nothing shorter than 500 pages over the month that follows. Will this be feasible? I don’t know, but it could result in me slashing the pile down to the less than 2o mark by March. I know that target level is still far, far too high. But what can I do? 50 books won’t read themselves…

Starting my pile at the top, I decided to read a book I was given for Christmas, the short Scum by Isaac Bashevis Singer. Singer was a Polish-Jewish novelist who emigrated to the United States in the 1930s where he lived for most of his life, was awarded the Nobel Prize for Literature in 1978, and wrote all his works in Yiddish, though oversaw all translations made within his lifetime.

I’ll be honest, I hadn’t heard of him, so don’t feel bad if you haven’t either, but do feel free to be smug if you’re more than a little au fait with his works. Scum is a relatively late novel, first published in English in 1991 (the year of Singer’s death), though I’m struggling to find a publication date for the text in the original Yiddish. Singer was in his late 80s when he died, so even if Scum had been composed two decades earlier, it would still fit very snugly into one of my favourite literary genres: dirty novels written by old men.

Hemingway’s The Garden of Eden is the ultimate example of this trope that I’ve previously read, but Thomas Mann’s (unfinished) Confessions of Felix Krull comes a close second. I haven’t read it, but Gabriel García Márquez’s Memories of my Melancholy Whores is meant to be a belter, and-

Sorry, I’m revealing my sleaze-loving literary knowledge, but the rather enjoyable Scum is firmly within this category. The protagonist, Max Barabander, is a rich man in his late 40s who journeys back to his homeland, Poland, after making a fortune in Argentina but then becoming impotent after his teenage son died and his marriage fell apart as a result. Scum tells the tale of him visiting his old haunts, charming young women, fucking middle aged women, seducing servant girls, proposing marriage to a rabbi’s daughter and attempting to recruit a clairvoyant as his babymamma and non-exclusive mistress. It’s sex-led, very much so, but within this is a broad fear of religion and “curse”-based consequences of his actions. Although he lusts the rabbi’s daughter and tries to become engaged to her whilst still legally married to his wife back in Buenos Aires, he is scared of an eternal curse being laid on his head by a powerful man of god. Though he thinks he should try to be a good Jewish man, eat kosher, stop fucking around, visit his parents’ graves (ostensibly the point of his trip), he is always distracted by company, food, booze and women.

As a wealthy, handsome man who lived for two decades away from Warsaw, he is attractive to everyone in the Russian-controlled city of 1906, when the story is set. Within the text, Singer plays well with contemporary historical events, with the idea of a Europe on the edge of modernity, somewhere that already has electric light, but still has a 19th-century religiosity and is undemocratic. He writes of districts of the city as towns within it, which is what contemporary social theorists dream of, cities as a construction made of many urban villages.

The language is sparse, but bawdy. The tone is reflective, but mired in religion. It’s about the ebbing away of faith that the 20th-century caused, but about the problem of someone whose urges and desires tell him to ignore the morality of his upbringing, but whose fear of mortality and old-fashioned social notions stop him from truly divorcing himself from these ideas. Max is a conflicted character, an impotent womaniser for much of the book (though he does eventually get his mojo back), he is ageing, too, his body as well as his conscience denying him access to the pleasures that other parts of him demand.

An interesting, grimy, read, all mud and food and poverty seen through the eyes of the nouveau riche. I’ve enjoyed discussing it somewhat more than I enjoyed reading it, but that’s because it’s a novel rich in ideas, and rich in scenes of a youthful middle-aged man living out the fantasies of a much older one. I love books like this. GIVE ME MORE.