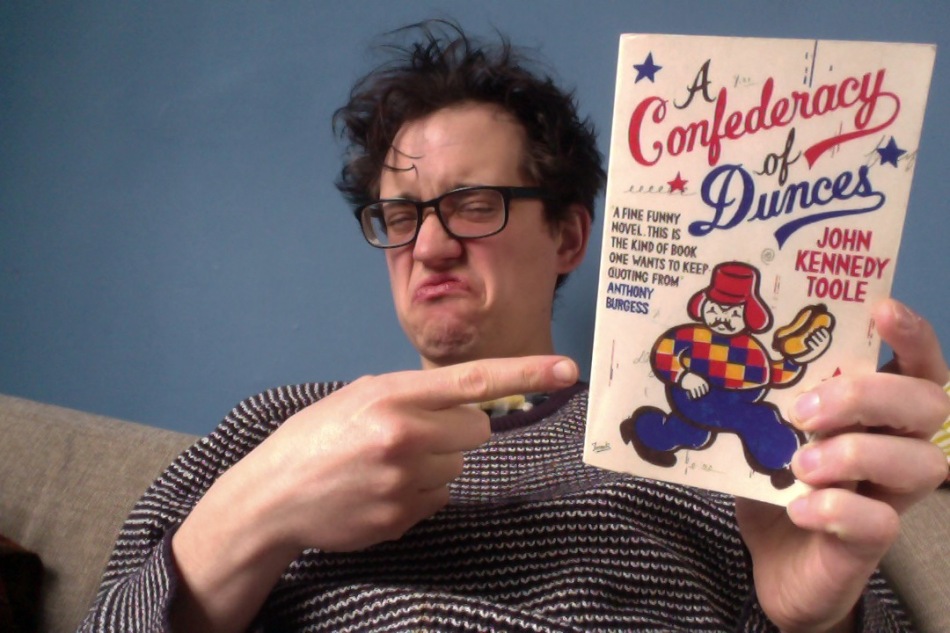 A very easy way of gauging how much I’ve enjoyed a book is how long it takes me to read it. Big, 500 page tomes like The Savage Detectives, all four translated volumes of Knausgaard’s My Struggle, Mantel’s Cromwell novels, within the last month Sarah Waters’ The Paying Guests – books like these I read in two or three days, bouncing through the prose with a joyful pleasure. Books I don’t like, however, tend to drag. A Confederacy of Dunces by John Kennedy Toole is a short 400 pages (as in not difficult to read at all), but took me almost a fortnight to get through. The reason? It’s pretty shit.

A Confederacy of Dunces was written in the 1960s, and after years of trying and failing to get it published, John Kennedy Toole killed himself. His mother then, as legacy, spent a decade lobbying and chivvying and chasing publishers until one of them relented and published the book, to commercial and critical acclaim. This vindicated her mission and made further tragedy of her son’s suicide. But, for me, I doubt that the book would’ve been published – let alone won the Pulitzer Prize – if it hadn’t had this great and oddly plot-resonant back story. The most pleasure I took when reading the book was during the three page foreword, which explained the publishing history and promised a witty, engaging and intelligent text. Well, that wasn’t what I got…

This mediocre comedy novel is about Ignatius J. Reilly, an over-educated slob who wanders around doing little to nothing in 1960s New Orleans. He lives with his alcoholic mother, compulsively masturbates, writes elaborate medieval-style tracts to himself, wears a big hat, corresponds with a female friend who is wrapped up in patronising politics in New York, has a series of “wacky” adventures and suffers from constant intestinal issues that are probably symptomatic of Crohn’s Disease or (at best) gluten intolerance.*

There are, to give the novel its due, some funny moments. I did laugh a few times, and some of my laughs were hearty. The patronising attitude of the faux-intellectuals trying to involve themselves with the civil rights movement is a particularly strong vein, but there are other jokes that really fall flat. Written slapstick, for example. Ignatius’ attempts at eloquence can amuse, but often they are as tiresome to the reader as they are to the characters he addresses. And though boho New Orleans is evoked in a believable (at worst stereotypical) style, the central protagonist is so annoying that the whole book fails to engage.

The story of its publication is the best thing about A Confederacy of Dunces. In particular, the intensity of the real life mother-son relationship illustrated by it and the question of how it related to the highly dependent but mutually self-destructive mother-son relationship of the novel. There is an interesting book in this story, but not within the covers of the one I just read. A Confederacy of Dunces felt like the unliterary ramblings of a no one, rescued by a dedicated (or guilty?) mother.

It made me laugh, yes, but I didn’t enjoy the bits in between the jokes. I’d give it a miss.

* That’s my diagnosis there, and please do remember that I am not a medical man.

0 comments on “A Confederacy of Dunces by John Kennedy Toole”