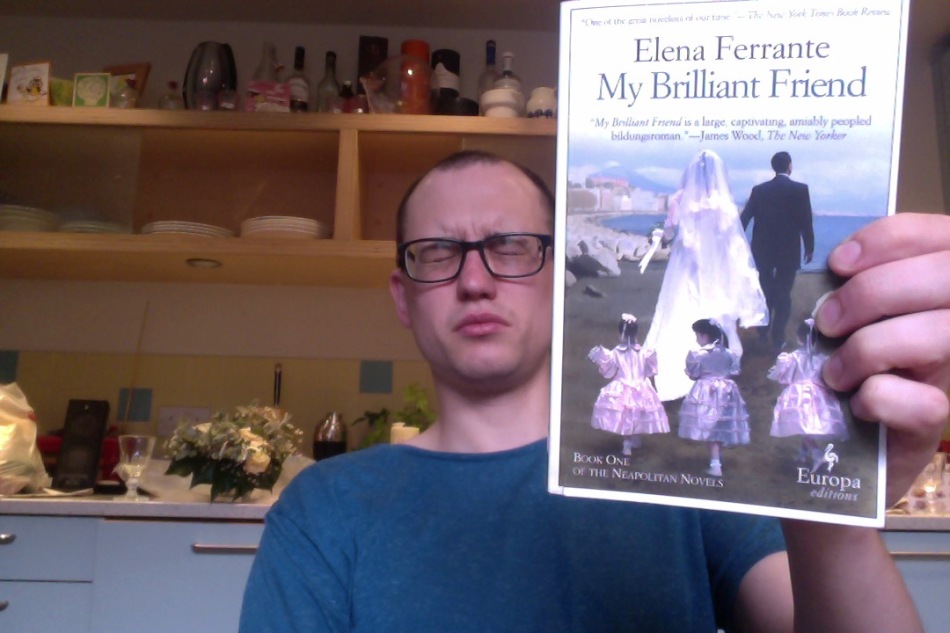 Elena Ferrante’s My Brilliant Friend is basically the current/the next “big thing”*. As Knausgaard was a few years ago, Ferrante is now. Her similarly long, in-progress, multi-volume autobiographical novel has gained huge acclaim in her native Italian and is now receiving huge acclaim in translation. My Brilliant Friend (L’amica geniale) is the first volume, and is about (and subtitled) ‘Childhood, Adolescence.’ The book opens in the present day, with the narrator having received a phone call from a young man who is looking for his mother, the childhood (and later?) best friend of the protagonist. She, Elena, does not know where her friend is, but has long expected her to disappear, to vanish, to run away, and her main surprise is that Lila, the friend, waited until middle-age to do so. The novel then jumps into flashback, and stays there.

Elena Greco is the eldest daughter of a porter at Naples city hall, Lila is the daughter of the local shoe repairman. They both have dreams, as children, of life outside their neighbourhood, and they are both intellectually gifted and excel at school, Lila always slightly more successful. As life goes on, Lila’s parents pull her out of education when she is about twelve, whilst Elena continues. From here, their lives diverge, but the successes and the pleasures that Elena feels in her intellectual development mean little to nothing when they cannot be shared with her best friend. The novel (the first in a series of four) ends with the two girls as two young women, one firmly cemented within the local community, the other educated and ready to leave.

In many ways it is a traditional coming-of-age story, and in many ways it is a very traditional autobiographical novel, particularly in the importance that books hold for Elena as a youth. Why the novel is interesting – and why it has been so successful, I feel – is that it takes traditional tropes of literary novels and applies them to a setting not commonly seen in works of this type.

We are placed in Naples in the late 1950s, there is a lot of resentment following the second world war, there is corruption, the mafia, and there is the slow growth of affluence that began to appear, generally, in Europe at that time. In this close-knit community of many families with long, inter-twined, multi-generational histories, we find a young girl with literary and educational aspirations. She doesn’t crave money, she doesn’t crave excitement, she craves intellectual stimulation and the freedom to enjoy the intelligence she has been blessed with. In many ways it is like a far less middle-class I Capture The Castle, but in many other ways it is far more Dirty Havana Trilogy. My Brilliant Friend is about people gently departing from poverty, and with that there is a lot of dirt, a lot of anger and a lot of violence.

There are fights and beatings and recrimations. There are honour attacks, there is a murder, there is infidelity and child abuse and smashed cars and threats of arson. There are loose attachments to the mafia, there is rape, there is fear, there is debt, there is the loss of education and there is much sexism. This is a society that is not the one I live in, and though it is impressively evoked, it is not a safe one to journey to, it is not a happy place.

I will continue on with Ferrante’s series, even though I fear that this violence, this culture, these attitudes, will be present throughout. The series as a whole has been frequently compared to Karl Ove Knausgaard’s My Struggle, with many people saying that this is the superior text. I can’t judge fully, having not read all of either, but on a book by book basis, Knausgaard’s A Death In The Family took me on a terrifying ride of emotions and contained passages that resound in my mind still, almost three years on. My Brilliant Friend, however, is far more concerned with community, with other people, and while this means that, yes, Ferrante is probably a far better writer when it comes to creating a myriad of fleshed out, detailed characters (and she does – there is a character list at the start of a daunting length, but whilst reading the text I never got anyone confused), Knausgaard offers a more in-depth and catastrophic view of one person’s mind.

This is a novel about female friendship, and about working class Italy and about intellectual joy. A Death In The Family is about alcoholism, regret, being a teenage boy in a provincial Northern European town and about becoming an adult at the expense of the strength of your parents. It is about aging and dying and regret and excitement and remorse and grief. My Brilliant Friend offers a detailed and intriguing portrait of a place and a personality distant from my own, while My Struggle has taught me a lot about myself. I don’t see the importance in other people, I don’t aspire towards living in a “community”, I’m deeply, truly, most interested in novels and texts and experiences of self-destruction. About consumption and about lust, about regrets and pain. And though there is a lot of pain (physical and emotional) in My Brilliant Friend, none of the pains are literary evocations of anything that has happened to me. Knausgaard writes of a life similar to mine (at least until the age I’m at now, when he became a published novelist and I gave up on everything important and decided to just earn money), which means it is perhaps lazier of me to prefer it, but Knausgaard captures emotions and experiences I recognise. When I was an adolescent I didn’t have romances, I didn’t have close friends, I didn’t have moments of happiness in contrast to the moments of pain. My childhood was nothing like Ferrante’s.

I’m a selfish reader, I suppose. I want to see things that teach me how to live. Sheila Heti, K. Knausgaard, Virginia Woolf, Flaubert – these are writers who have helped me know better myself. My Brilliant Friend – though I do rate it highly – didn’t feel relevant to me, personally, and I was hoping it would.

Anyway, I say that, but right now I’m going to go eat nachos, drink piña coladas and watch Game of Thrones. None of which will improve my self-knowledge at all.

Do read Ferrante, though. A great book.

* Well, the next big thing in the world of autobiographical self-exploratory novels…

2 comments on “My Brilliant Friend by Elena Ferrante”