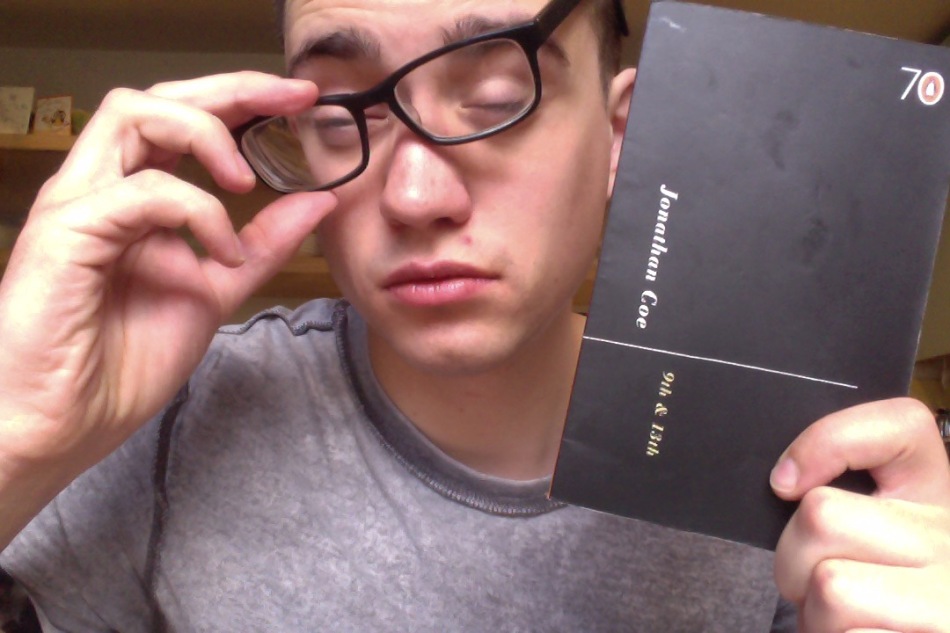 I picked this up a while ago from a secondhand bookshop somewhere, shortly after reading Jonathan Coe’s Like A Fiery Elephant, his highly acclaimed (AND RIGHTLY SO) biography of one of my literary faves, B.S. Johnson. Coe’s novel The Rotters Club, about being a teenager in the West Midlands, I had read as a teenager in the West Midlands and really enjoyed, and as Coe is from the neighbouring town to where I grew up, he is a writer I’ve always paid some level of attention to. (Was that a split infinitive?)

So, as Coe’s heartbreaking literary biography of a depressed and conflicting man moved me deeply, and as his teenage angst novel was an accurate (though with much more sexual content) reflection of my own life at the time, I came to this collection of four short prose pieces with high expectations. 9th and 13th was part of one of Penguin’s many series of small books, published in 2005 to celebrate the company’s 70th anniversary. Coe jokes (?) in his introduction that this slim, 60-page volume could have been titled The Collected Shorter Prose, and writes about how he prefers to write in the long form. I agree with him. I prefer to read – and prefer to write, not that I’m able to do that any more – in the long form. Mediocre novels can be better than the best short stories, that’s a fact.* And Coe’s texts in here are far from being the best short stories I’ve ever read.

There’s a Gothic story about a child believing he sees the ghost of a murder victim, there’s a short piece where a nightclub pianist fantasises a life with a woman who asked him for directions (bit of a male cliche), and then there’s an alright story about a married, male, middle-aged soundtrack composer who leads women on then feels guilty about it. The collection concludes with its strongest piece, a structurally interesting non-fiction text about Coe’s relationship with the Billy Wilder film, The Private Life of Sherlock Holmes. This was genuinely interesting, and quite inspired, chronically a lifelong interest in an obscure cultural product, jumping from encounter to encounter at various stages of Coe’s life. It was the thorough and investigative personality that Coe displays when he himself appears as a prominent, present, narrator in Like A Fiery Elephant, which is one of the book’s most enjoyable – and stylistically significant – features.

What this tells me is that though I do like Coe’s writing, it is Coe I like, rather than Coe’s fictions. I very much enjoy his essayistic work, but I didn’t rate any of the three stories here and cannot trust my teenage self as a hindsight judge of the literary merit of The Rotter’s Club.

I will certainly read more essays by the man, but I can’t see myself going out of my way to read any Jonathan Coe fiction any time soon. Apologies, homeboy.