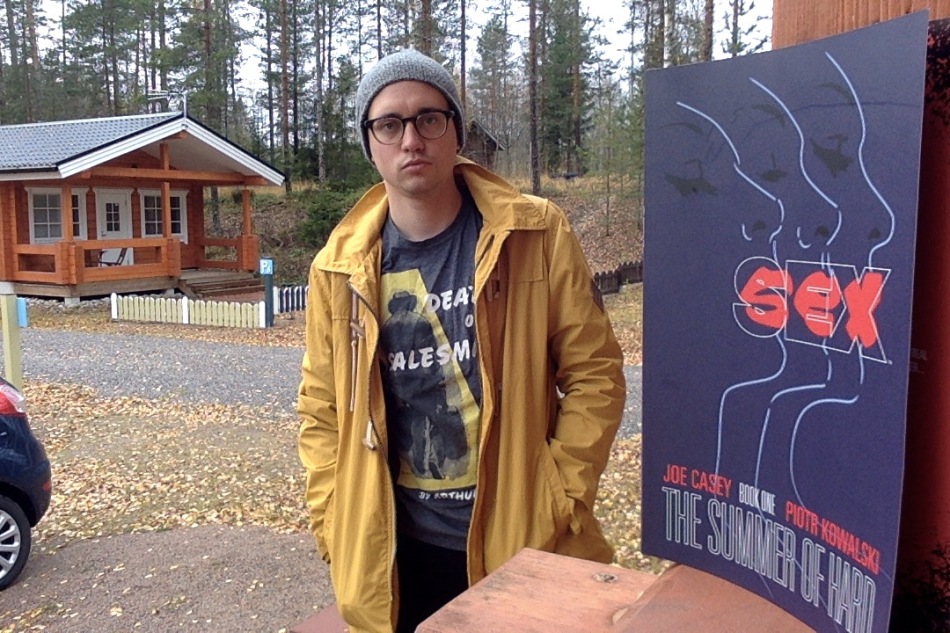 Again, I am too caffeinated to concentrate, too buzzed up to stop typing for more than the fifteen minutes or so it will take me to pour out a liquid stream of 1,000-word prose like the excrement regularly leaking from my anus.

I’m still in the woodland, this is my penultimate day (and final night) in the middle of fuck-where all up inside the Finnish lakes, and accompanied only by a giant, giant, jug of some of the strongest coffee I’ve ever consumed, I have this morning read Sex: The Summer of Hard, a comic book by Joe Casey and Piotr Kowalski.

Why did I choose to read this? That’s probably the first and most important issue to address. As any regular readers of Triumph of the Now will know, I have a tendency towards the prurient* and I also have a growing interest** in graphic novels, in comic books, in this kind of thing. So, it appealed on two clear levels and justified itself on a few more: it was the first book in a continuing and contemporary series, it was produced by a comic book company run by Robert Kirkman, the creator of The Walking Dead (which I like) and it was only £7 on a day when I was openly looking for books to read on my then forthcoming, now current, holiday. Also, I could tell from the off that it would be a phenomenal contrast to Proust.

The premise of Sex: The Summer of Hard is thus: Simon Cooke is a prominent billionaire playboy returning to Saturn City after seven months away following a bereavement. But rather than actually having been a playboy, he was instead a masked vigilante, the Armoured Saint, keeping his city safe from the bad guys, none of which he killed. He returns, having promised to himself and the relative who died – the elderly assistant who helped him with his activities – to never fight crime again. Despite the underworld having grown considerably during his absence, he (at least for the length of this book, though who knows if he maintains this as the series continues) sticks to his word: he fights no crime. The problem, though, is that for Cooke, his entire sexuality was wrapped up with his identity as the Armoured Saint, his relationship with his nemesis, Annabelle Lagraveness (known as Shadow Lynx), being the most significant adult bond in his life. Now, in his mid-30s, he has a lot of lust, a strict moral code and a morally-crumbling city that he is trying his darnedest to ignore.

In short, he’s Batman with a hard-on.

So, in its very clear riffing on Batman I’m somewhat surprised Sex hasn’t been sued, but in terms of its heavy sexualisation and openness towards all sex acts, it has to be applauded in some ways. Like my own work, it seems to regard all sexuality as intrinsically corrupt, with no (consensual) sex act any worse than any other. Though, yeah, that may mean that the book is actually far more repressed than one would expect, it does mean that it chimes with my own views on the topic (see Simulating Cunnilingus on a Fried Egg Sandwich) and thus isn’t a painful read for anyone who prefers sex as something to discuss rather than something to do.

It’s fun, but neither particularly penetrating or particularly deep (wuhey!), but engaging enough and enjoyable in just how fucking obscene it is. Not the best comic I’ve read, but far from the worst. I’d read another volume.

But I am a prurient rogue…

Oh, and, quickly, Kowalski’s pictures: though occasionally he does make women look like they have no genitals, in many places his art is not just evocative of sexuality, but somehow manages to capture movement in a way that I have never experienced before, rendering on a flat page the idea (if not the reality) of a 3D film (note I do not say a 3D image, which life is). The small print at the start of the book expressly allows reproduction of Sex’s content for review purpose, so here are a couple of frames. Note the blur on this one, implying movement-

Actually, in hindsight, it doesn’t photograph well, so I won’t do that. Rely on my description, yeah?

* You could be harsh and substitute this for “the puerile”, a stance which would be corroborated by the ever-present copy of Viz currently nestled beneath the Proust in my travel bag. YES I HAVE A “TRAVEL BAG”.

** It is only in my late twenties, when I really should be leaving childish things behind***, that I have become able to afford (smugsmugsmug) to have this as an interest. They’re expensive, comic books, and very difficult to buy second hand, which is still how I buy the majority of the novels I read.

*** It is with real pain that I find myself contemplating my age. 27 now. 27. There are numerous cultural figures who established serious reputations and died by this age. I am old enough to die, and for my life’s work to be complete. That’s depressing. I’m old enough to die or have children, essentially, my life over. And it feels like it’s barely begun. Even two years ago, if I’d died then, I could’ve been a tragic youth, leaving behind a scathing novel eviscerating his class, self and lifestyle accompanied by a travel journal demonstrating the corrupt and broken mind that he possessed… (White Lines, Black Truffles and Alone but not Lonely) Now, what’ve I got to add to that? 300 blog posts about books and a novel no one wants to read about John the Baptist??? It no longer feels like I’m wasting my life, rather than that I have wasted it, my youth at least. I never fucked around like everyone in Sex: The Summer of Hard does, I never got arrested, I never thought drug use was consequence/risk-free and got nastily dependent on alcohol consumption too young for it to be normal. I sit here, high as a kite off fucking caffeine, barely able to look at the screen, feeling seasick, feeling like I’m on a boat, the ever-present nausea that overwhelms me pulsing inside my head, my skull, my brain, echoing and creaking amongst itself, my temples pressing against my glasses, hungry for water or food. I feel like if I stood up or stopped typing, I’d collapse, I feel like if I tried to look at anything other than the current word that I’m typing my eyes would steam up, fragment, my sight and my consciousness disappearing into the nothing that I wish it had. Last night, drunk again, I sat, curled up, crying, wishing I’d had the finality to kill myself two and a half years ago when I’d wanted to, when I lazily tried to. Now, there’s too much fear. I knew I could’ve got up, naked, gone and walked to the lake 20 metres from my cabin’s front door and swam out into its black, midnight waters until my arms and legs got tired, waited for the hypothermia, the hyperventilating, the cold and the wet to drag me under and flood into my body, the darkness of the lake replacing whatever lightness that is Life. I didn’t, of course I didn’t. Instead I went and drank water until I felt sure I could sleep without throwing up, then lay down and slipped into a different kind of nothingness. Within that, too, there was no escape. Rage and anger and worry and depression are my dreams. Anxiety dreams about work are fucking depressing, fyi. Lots of dreams about being younger, too, about having hair and my hair falling out. I am bald now, too – what single thing in my life doesn’t point to it being over? I still have anxiety dreams about balding, despite that narrative being complete. Dreaming I have hair and my hair is falling out, freaking out about it and waking up, scared, terrified, for one moment, then a second of relief, “IT WAS JUST A DREAM” but it wasn’t, was it??? Every time I wake up from an overwhelming autobiographical nightmare I wake up right back into the same fucking thing. I have no creative output bar this cry-for-help website, I have no free time due to an overwhelming job, I have no social life, I have no hair, I have no prospects of getting into drag hip-hop which I REALLY WANT TO DO and I have no dog. I don’t even have a dog.

0 comments on “Sex: The Summer of Hard by Joe Casey and Piotr Kowalski”