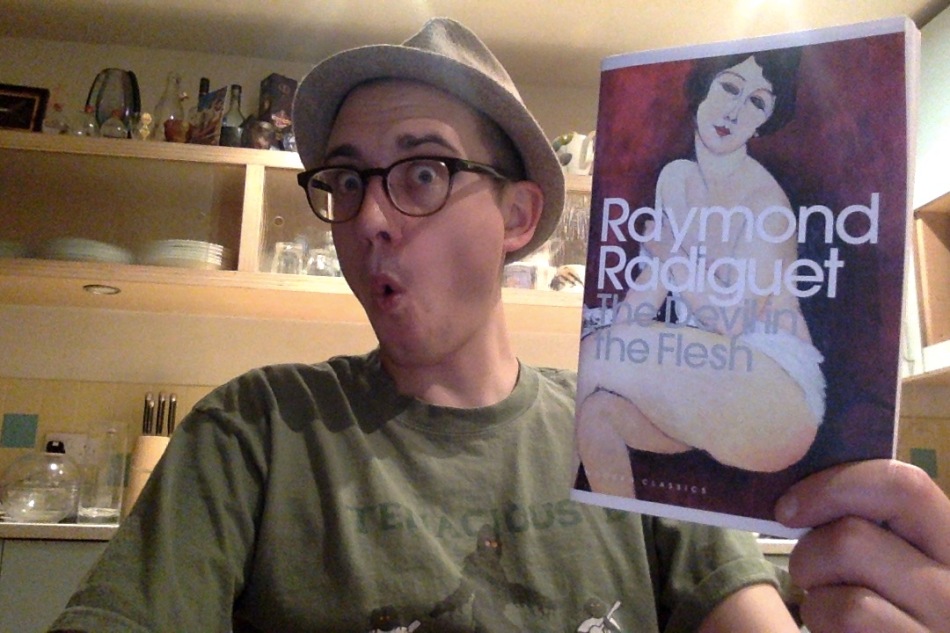 It is 1230am on a Friday night, I am (which is very rare for me) not at work, my girlfriend is in a foreign country, my cat is fully fed, and where am I? Not out, painting the town off-white[1], but sat at home with cheese on toast writing a late night blog post on a racy French novel.[2]

The Devil in the Flesh (or Le Diable au Corps) was written by Raymond Radiguet, a French modernist-era figure who wrote this wonderful little piece when he was only seventeen. It was published with great pomp and a huge marketing campaign – due to the age of its author – in 1923, and by the end of the year he was dead. Dead at 20, a literary star, another Lautréamont. Dead at 20, best buddies with Jean Cocteau, friends with Picasso and all the rest of the fucking scene. Dead at 20, a literary star.

The Devil in the Flesh, to be fair to the smarmy little fucker, is great. It’s a short novel, 100 pages long, about a disastrous – but intense – love affair, about a young man’s (or an old boy’s) first experience of love and sex and how it shapes him as he enters adult life.

Francois is a fifteen year old boy, son of liberal parents and living a short distance outside of Paris in the midst of World War One. He meets a 19 year old woman (and she is a woman, though his “man or boy” conundrum is more ambiguous) who is engaged to a man who is fighting in the trenches. They meet a couple more times, him bunking off school to accompany her as she chooses the furnishings for her soon-to-be-established marital home, she gets married while her other man[3] is on leave, he returns to fight, she and the boy start hanging out more in the afternoon, jus’ cuddling’ like, and then one night he sneaks from his parental home in the middle of the night, enters her bedroom using a spare key she’s pointed out (pointedly?), she strips him naked and (oh yes) they begin to make fuck. Lust takes over infatuation, and soon the neighbours are inviting people around to overhear their regular afternoon sessions, soon there’s scandal brewing and soon Jacques[4] is about to be constantly on the scene once the armistice is signed.

The armistice is the villain, the war is the enabler, the escort, of the affair. The relationship is well written, Francois’s two adulterous[5] encounters are bleak in their confused, teenage guilt, and all of his love affairy sexy bits are exploratory and excitable and engaged.

The plot was almost certainly based on the real experience of the novelist, though the husband of the woman he wrote it about left a long deathbed commentary on the novel, claiming it was all drawn from a diary Radiguet stole. It must’ve been theft, he reasoned, for otherwise Radiguet’s lover had said the same things in the bedroom, been aroused by the same caresses, found the same ideas romantic and been sensually satisfied in the same way by two lovers, which obviously couldn’t be true, could it?

But, to conclude (as I have work in the morning, hence why I don’t have work right now), The Devil in the Flesh is an enjoyable book about dawning sexuality. It is, for its time, beautifully straightforward and impressively naturalistic, and it is offers a psychological insight into the reality of anyone’s teenage sexual fantasies actually coming to life: obviously it ends in shit, as do all engagement with sexual desire, right?

The Devil in the Flesh hammers home that universal message of life and literature: repress repress repress. Sex induces death (or worse, conception) and there is no happiness to be found anywhere other than in books.

But it is snappy, its prose is insightful and it lacks the tiresome, florid whirligigging of usual 1920s texts. I’d recommend it. Particularly coming after Don puta Quixote.

[1] This is intended as a hilarious twist on the phrase “paint the town red”, whereby I have substituted “red” for a vague description of the colour of semen, the joke being that “painting the town off-white” would be jizzing everywhere. #outonthatown

[3] What is most interesting about the novel as a whole is that Jacques, who is “the other man” to Francois, is the husband, the traditional “non-other man”. In this novel, particularly in a 20th century whiney liberal reading of it, Jacques is neglecting his wife by going off to fight in a pointless war and is thus – quite rightly – likely to be cuckolded. While he is off killing the occasional German in stalemate battles that cost hundreds of lives and ultimately and directly lead to the wider, involuntary, horrors of Dubya Dubya Two, it should be of no surprise to discover that his wife – who he is meant to care for and provide emotional, sexual and (in that era) material support for – is seeking at least some of that support from elsewhere? If I ran off to go fight ISIS for six months, putting myself in direct danger of death on a daily basis – a further emotional strain on a partner – I think I’d be utterly delusional if I didn’t expect to return home to suspiciously clean bedsheets. I believe that the daily fear of your partner’s violent death hundreds of miles away is a legitimate mental worry that can be distracted from by having a secret (emotionally and sexually fulfilling (temporary)) relationship with someone else. And the reader Radiguet was writing for (I reckon) was kinda onside with that – I don’t think the reader is meant to judge either the naive and horny 15 year old or the attractive, neglected woman abandoned by her new husband. Jacques is Martha’s “other man” because he is the one she sees in secret (for the reader) – he is the one she fucks while we believe – as a romantic heroine – she should be chaste for all but our hero. Neither of them are-

Actually, this footnote is taking over the entire post. Back to above the line.

[4] For future reference, readers, you’re meant to read the footnotes as the relevant symbol occurs in the text, which means you really should know who Jacques is, despite the name not having appeared in the “main body” of the text before this point.

[5] By that I mean when he cheats on Marthe. Which technically isn’t adultery, as both of his encounters are with unmarried young women, one of whom is even more up for it than he is. But it’s difficult to find an adjective for “cheatingwise” that doesn’t imply marriage and thus it becomes difficult to imply that one can breach the sexual, romantic trust of someone who is already breaching the sexual, romantic trust of someone else. But that’s 1970s morality, isn’t it?

1 comment on “The Devil in the Flesh by Raymond Radiguet”