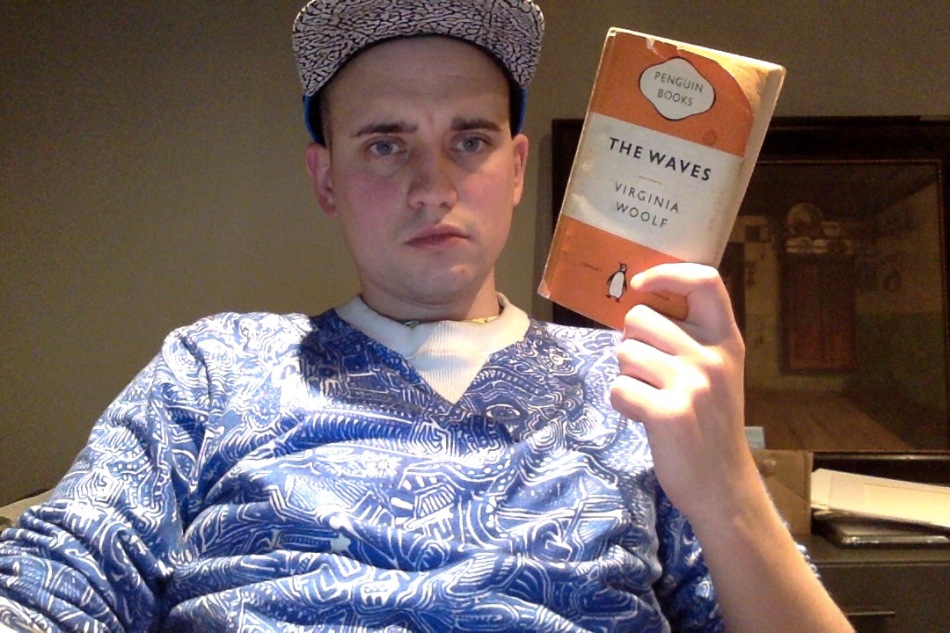 Fuck the Lighthouse, they say, fuck Dalloway, fuck the Acts, fuck the one with the man that lives three hundred years and turns into a woman (or is it the other way around?), fuck the one about how writing can only be done by the rich; read The Waves and marvel.

Read The Waves then die.

The Waves is heavy going. Not just in terms of its intellectual heft (it ain’t easy, like livin’ free, readin’ The Waves), but in terms of its emotional weight. Woolf used all her skill as a modernist novelist with an unprecedented understanding of the thoughts and experiences of others, and has here created a document that sums up the ridiculousness of life, sums up the reality of life, sums up the SUM of existence: it is nothing, it is pointless, it is empty.

Life is a couple of decades of waiting for ones childhood idea of life to begin, then three to five years of feeling like you’re alive followed by forty to sixty years of reminiscence, nostalgia and regret. The Waves fully captures the way I feel at the moment and the way I’ve been expecting to feel until death, ever since I shaved my few remaining hairs off last Summer. That was the end of youth, that was the end of hope. And Woolf – who drowned herself in a river at 59, ten years after publishing The Waves – envelopes and contains this sense of despair, a despair that would continue to grow within her, but which was already (clearly) fucking entrenched.

The novel is not quite what it seems, it is difficult to describe. On face value, it is the story of a group of six childhood friends and their interweaving lives, told from the perspective of the group of them having a nostalgic conversation at some point as they all near death. In reality, the place where they are speaking is never mentioned or described, the possibility of their being together or apart (or even alive!) when they speak is unexplored, their speeches do not respond to each other, though do deal with the loose plot chronologically, to begin with. As The Waves goes on, the chronology shifts, as The Waves goes on there are more and more repetitions of theme, repetitions of idea and repetitions of incident. As the book develops the reader loses touch with who is speaking, for each of them knows about the lives of the others, each speaks for twenty, thirty, pages, the vocal tells that differentiate each character when they speak of themselves as children become common parlance as they talk about each other as adults. The Waves centres on the importance of others in an individual’s life, but also on shared experience, on the falling apart of friendships and relationships, and on the severely haunting repercussions of a premature death.

Percival is an off-stage character, not one of the six who speaks or who the reader ostensibly knows their entire life, but he is instead a schoolfriend of a couple of the male central figures who was briefly romantically involved with one of the female characters. At a young age, he dies, and though only two characters knew him well, and neither were in regular contact with him by the time of his death, all of the characters consider his passing as a significant point in their lives.

I interpreted there being three points in the narrative where all six characters are together – once at a coastal house in Southern England when all are children; once (some invited as friends of invited guests) at Percival’s lavish farewell dinner before he emigrates, when they are early/mid-20s; once, a final time, when at a deliberate reunion at Hampton Court Palace in middle age. They all know each other and see each other in smaller groups regularly, like life, I suppose… After youth, there are no groups of friends. At least for me, though I am often surprised by the idea that this isn’t the case for everyone.

The Waves is Virginia Woolf arguing that youth/young adulthood is the centre of life. That all before it is a build up, a preparation for it, and all that is after it is a reflection on the successes and failings held therein. One of the six has a successful career that doesn’t take off until he is over 40, but we learn little to nothing about this, as even the passages (in theory) from his perspective focus on his reflections at that age of what had come before – he is not happy to have found success, but sad he did not have it when it would have mattered. Though the voices cycle towards the future as the book goes on, each later scene contains more references to scenes that came before, or scenes that were set, though not mentioned, earlier. We see characters who only met him once lionise Percival, we see people think about a chaste kiss between preadolescent children as a moment of severe heartbreak, we see people turning flirtations into love affairs, we see what life following youth is: looking back, wishing for change, wishing for a return to the feeling one lives by when young: that things are gonna be better; even when youth is at its best, one feels that better things are to come. But they’re not.

There’s a Morrissey lyric (‘These Things Take Time’, Hatful of Hollow, The Smiths) I used to play a lot in my early 20s thinking about the best moments of my teenage life:

Oh, the alcoholic afternoons / when we sat in your room, / they meant more to me / than any, than any living thing on earth

Yeah, those alcoholic afternoons were great, and what was great, on those teenage alcoholic afternoons and nights and mornings, listening to The Smiths and that fucking Bright Eyes album, I’m Wide Awake It’s Morning, was the idea that life would be full of feeling, life would be full of the sense that love and loss and excitement and music and intoxication and creativity and friendship and all that other mother jazz would be there, would be central, would be key. But it hasn’t been. True adult life (i.e. my life since shaving my head and abandoning my social life) has been spent reflecting on the fuck ups I made, aware of how to never repeat them, but also aware that true happiness comes as a price I am unable to pay. I’ve spent hours thinking about regretable actions that I don’t actually regret, and for the past month I’ve spent hours every day wondering if getting a dog to distract me from the mundanity of my life is a selfish act, but that thought is numbed by the fact that the dog does actually seem to like me. Which is a fucking relief.

The Waves is written like prose poetry. The voices combine, coalesce, cohabit; memories are shared, and memories are understood as shared. People exist as part of a shattered whole, ageing is seen as an inevitable disappointment, life itself never quite what one was promised when a child. The Waves deserves to be read slowly, languorously, with every page pored over and studied, every sentence weighed in the mind. It is not a casual or an easy read, and with my failing mind, I didn’t grasp it as fully or as weightily as I wish I could’ve done. But I’m no longer young, I’m no longer a highly functioning alcoholic, and depending on the measures used, I’m not even really a functioning alcoholic. “Without the reasons to drink, I wouldn’t drink; without the drink, I wouldn’t have the reasons to drink,” that’s the self-hating mantra I keep repeating, but I don’t know how accurate it is and I get the DTs and severe anxiety whenever I go 24 hours without drinking, so it’s just easier to continue. The biggest problem with being addicted to alcohol is being physically addicted to alcohol.

But, my own failings aside, something I can acknowledge with clarity is the heart-breaking Art of The Waves, the literary prowess of Virginia Woolf.

These quotations chart the novel, and chart life itself:

I am filled with the delight of youth, with potency, with the sense of what is to come.

I shall fail and shall leave nothing behind me but imperfect phrases littered with sand.

How fast the stream flows from January to December! We are swept on by the torrent of things grown so familiar that they cast no shadow.

Woolf breaks the broken with almost every page.

Highly recommended, especially if you’re the wrong fucking end of your 20s.

What word is the opposite of “reassuring”? Because that is exactly how The Waves should be described. Making a bleak man feel bleaker. Is that good or bad?