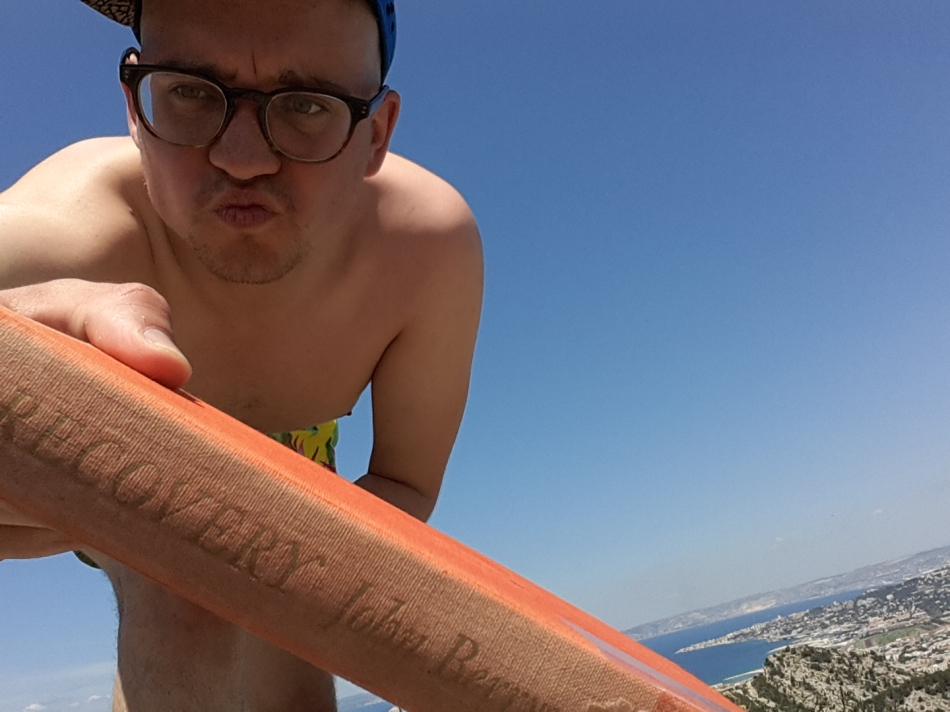 Long before James Frey was breaking Oprah Winfrey’s fragile heart by fictionalising his time in addiction therapy and the behaviour that led him there, the noted Dream Songs poet and simultaneous old soak and old goat John Berryman had already bettered A Thousand Little Pieces in a thousand little ways, other than one single flaw: Berryman died before he managed to complete Recovery.

Autobiographically (if it matters), Berryman didn’t recover (i.e. attain long term, permanent, sobriety) from his alcohol addiction: he’d been a chronic drunk for so long that his body and his mind were wrecked beyond repair. He killed himself, by jumping off a bridge, in 1972, drunk. Dead under the influence, which is how every good addict ends their life. That’s a pointed comment aimed at James Frey, who I really hope isn’t still trading off the addict identity given that he left rehab – allegedly able to stare pints of whiskey in the face without being tempted – a decade and a half ago.

That’s one of the things that puts me off engaging with the usual and weighty ways to cut down my own drinking.

I often question whether or not I’m an alcoholic, and 80% of the time I answer a firm yes. Engaging with a realistic and nuanced piece of literature about addiction therapy has made me question this response quite seriously, for though I tick a lot of the alcoholic boxes – daily drinking, regular blackouts, injuries whilst drinking, working hungover, never leaving a drink unfinished, thinking about booze all the time, spending too much on alcohol, most of my personal relationships being rooted in a mutual interest in alcoholic intoxication, etc etc etc – I also tick a lot of the heavy-drinker-but-not-addicted-to-drinking boxes. Such as relishing not drinking. Then again, I almost idealise sobriety in a way that labels me as someone who sees it as unattainable, which is definitely addict thinking. Also I feel funny in a very physical way if I don’t drink [enough], so it really would be a good idea for me to get the drinking into hand.

While I walk my camino, my hipsterpilgrimage, what will soon become the European PCT if more pricks like me start to do it, I am going to be sober. Not last night, I had a single glass of a lovely locally produced sauvignon blanc with my weird Lourdes meal (I say lovely, I was promised dry and it was medium dry), but from the minute I’m on that walk I will be staving off the booze. I’ve been accidentally cutting down over the last week, just by virtue of being a) in Marseille with my father instead of East London or elsewhere with my reprobate social circle and b) not stressed and anxious about anything. It’s a real help, for those of you looking to curb the alcoholic urge: quit your jobs, run away, head south and head there as slowly and languorously as you can. I have several tasks to do today, actually, and all of them are manageable and exciting. I’m not lost or dead or disappeared, I’m just doing things I want to be doing. What this actually points towards is a massive, boozy, relapse the moment I have any work-related stress in my life, but the fact that I’m now self-employed negates this. Going forward, if work is driving me to drink, it’s me doing it. Removing things that can be used as an excuse puts the onus and the pressure to succeed at moderation in the right place: the self.

And that is what Recovery is about, it’s a beautifully written and incredibly moving novelisation of John Berryman’s own most succesful experience in rehab. The fictionalised version of the lecturer-poet-minor sleb is a lecturer-scientist-minor sleb called Alan Severance. Severance is in rehab for the third time, but flash forwards within the narrative make clear that this time he succeeds, every time he makes a step in the right direction (one of the twelve, baddum baddum), the reader is given a sentence cutting away to the application of his progress in his life outside the hospital walls. Severance’s experiences in the hospital mirror Berryman’s, and one feels that if he had completed the novel he would have either separated the men a little better or – more likely – removed the confused attempts to differentiate them. Berryman seems to forget that Severance is meant to be a scientist when all discussion of his career and interests are literary or philosophical, an error that is unsatisfactorally explained away by another character calling him a “Renaissance Man” or a similar American idiom. Other than these narrative slips and the fact that the final two chapters only exist as typed up authorial notes never meant for publication  (a la The Last Tycoon), the text is otherwise rather faultless. It is engaging and approachable, and offers a keen and inspiring message of hope. This is clearly why the writing failed: Berryman could not write into existence a recovery that hadn’t happened, and the more joyful Severance became, the wider the gulf between what he wanted for himself and how he felt. Sad, really.

I’ve read lots of books about alcohol and alcoholism, but I don’t think any of them quite acheive what Berryman’s does. This feels the least fictionalised, it feels the most open. The nods towards changing names and jobs feels like a waste of time that even the author doesn’t really believe in. Severance is Berryman, and every terrible act Severance must confront and admit to was a terrible act Berryman had to confront and admit to. There’s no need for me to detail all the scandalous stuff, but there were broken marriages, abandoned children, public drunkenness in deeply inappropriate places, ruined friendships, damaged property…

In the rehab clinic, to begin with, when outside of group therapy, a popular topic of conversation is other alcoholics, is famous witticisms of dead alcoholics, is tales of drunken bravado. But then, later, the realistic appraisals of intoxication fill social time as well as the time spent with counsellors, all of whom are recovering  (there’s no such thing as recovered) alcoholics. Another odd touch is the naming of two of the counsellors as Keg and Vin – you don’t have to knock back the amount of fat, French, Chardonnay that I do for the latter to remind you of wine and the first to remind you of beer, but for an alcoholic everything comes back to booze, everything comes back to the first step of the AA’s 12:

We admitted that we were powerless over alcohol – that our lives had become unmanageable.

This is the step Severance always struggles with the most, for this is the one that requires a conscious and decisive drop in the alcoholic’s attitude towards themself. “Powerless over alcohol” doesn’t sound like something a rational adult should be, right? “Our lives” aren’t “unmanageable”, just our drinking, right?

Severance develops and improves as he looks at himself with more honesty and more aggression, as he strips off delusion and self-pity and comes to terms with the man that he is. Severance looks into the darkest, most sordid, depths of his past and acknowledges that what is past is past, no matter how much he wishes it wasn’t. Severance learns about himself and how to – with the help of a strong support network, plus money, plus fame – move on. To live in the now instead of dwell on the past.

Maybe that’s what we all need to do. Forgive ourselves, but without forgetting.

To be honest, nothing sums this up quite so well as Berryman’s short forward, which ends:

all facts are real; ladies and gentlemen, [/] it’s true.

A great read, should be more available than it is. Better than a literary curiosity. A warning.