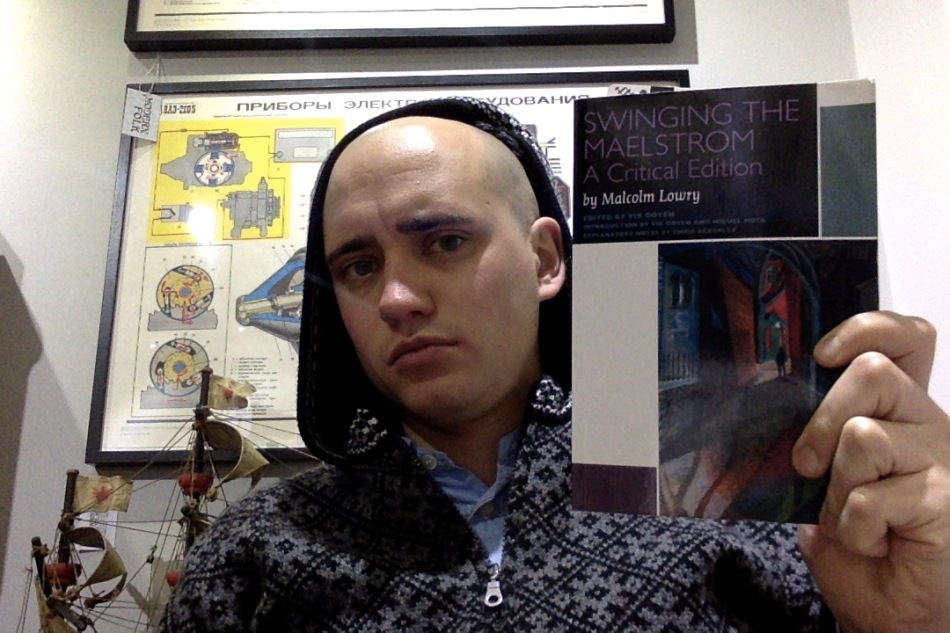 Stop what you’re doing, quotidian Malcolm Lowry fan, and learn something new: everything you believed about Lunar Caustic is wrong.

Lunar Caustic was once considered a complete novella left behind by the dead Lowry and published – as he’d left it – in 1968. That was not true: Lunar Caustic as published was firmly the work of Margerie Lowry (widow and possible murderer) and Earle Birney (academic, poet and probable friend), editing together the many, many rewrites Lowry made throughout the 1930s to 1950s of a text he first called The Last Address, then Swinging the Maelstrom and finally Lunar Caustic. Before he died, one of these manuscripts was translated into French and published, but none of the material saw print in its native English until the late sixties, and a lot of it not until now. Birney and Lowry created Lunar Caustic out of two distinctly different manuscripts. One bore the first title and was last worked on in 1942-44, while the other had the second name and was last edited by the (at the time living) dead author in 1951-52. In these intervening eight years, Lowry had changed the name of his protagonist, the name of one of the protagonist’s friends and the name of the doctor. Lowry had also changed the doctor into a family relative and removed the tone of hope from the end. Lowry had cut huge sections of dialogue and also removed many experimental touches: in the text known as The Last Address, Lowry takes quotations from medical journals and drops them into the text; he explores rich, literary allusions in great detail and he features a protagonist who’s a drunk writer who kinda finds redemption, but not really. In Swinging the Maelstrom, a reader is presented with a far more simple story, with no long chapters of weighty discussion, the literary allusions pushed back and a simple tale of a drunk musician (not writer) enjoying a restorative stay in an American hospital that he has to leave due to the fact that he’s a foreigner. In Lunar Caustic we get a neat combination of the stronger elements of both. The lead character has the more appropriate name (an English name for an English man), he is no longer related to the doctor (a pointless coincidence and a weird thing for Lowry to WRITE IN rather than WRITE OUT as time passed) and their conversation is shorter, there are no medical journals pasted in but some gentle structural experimentalism does remain, presumably to indicate the fractured nature of the mentally ill alcoholic mind. This paragraph is too long.

This book – Swinging the Maelstrom: A Critical Edition – contains two and a half versions of the project Lowry would later come to refer to as Lunar Caustic, plus an impressive plethora of information on Lowry’s long-form composition. We get Swinging the Maelstrom as edited in December-January entering into 1952 (one edit later than the text published in 1956 as a French translation – this being a non-posthumous Lowry publication I was previously ignorant of), plus a full version of The Last Address dating from 1936 and a version of the final two chapters from 1939. So that equates to one and a half versions of The Last Address. Swinging the Maelstrom benefits from in-depth annotation, whereas all we’re gifted re: The Last Address is notes on the physical text, i.e. where/when changes occur and how the two texts differ between the 1936 and 1939 versions of the opening chapters.

Margerie Lowry’s lie at the time of her husband’s death was that he had spent the final few years of his life working like a fucking machine, finishing off everything he’d ever started. This was not true, hence why it took both her and other editors many years to put out his other books (to be fair, though, what they published as Hear us O Lord from Heaven thy dwelling place and Dark as the Grave Wherein my Friend is Laid are both stonking reads, and the first of those was definitely majority Malcolm). Malcolm never finished Lunar Caustic, whatever he called it, and every time it was rejected he continued to work on it, and even when it finally found a publisher (in translation) he still continued to edit the English version, kind of, sometimes.

Margerie’s 1968 edit, I feel, is due a bit more praise than the editors of this volume give it. I’ve read that novella several times and every time it’s affected me, pretty deep. Then again, I’m pretty much exactly Lowry’s dream reader, a similarly depressed alcoholic who’d love to use writing as the lever to push him/me out of the doldrums, but never makes it, never makes it. OR makes it enough, in Lowry’s case: Under the Volcano is a sublime, harrowing, novel, far superior to all of my unpublished manuscripts1 . But, obvs, the problem was that Lowry never became truly happy, never got enough of his work published – or (arguably) publishable – before his death in order to gain satisfaction from his work.

The overall narrative of this tale works well. It’s strong, it’s harrowing and it’s relatable. Lowry’s protagonist – whatever his name – is an Englishman adrift in New York, but he’s also a drunk, a loser, a man who’s lost his career and his marriage. What that career was and how that marriage ended alters from draft to draft, but what never changes is the overall story: that of an ill man being treated in hospital and leaving better, but not cured. Lunar Caustic is riddled with awful lines about the inevitability of addiction, the loneliness of city life and the easy comfort to be found by fellating a glass bottle and swallowing what it squirts into your mouth.

Lowry captures the pounding mediocrity of an alcoholic existence, the damning urges that compound the drunk to continue finding the same quick fix in the same fucking way, knowing that the actual problems that kick off the drinking will be fixed neither drunk or hungover. There is no escape, and his death aged 47 proves what his writing foretold. Which is why I find his prose so depressingly unsettling, but keep coming back to it almost as frequently as I come back to the bottle.

Vik Doyen, Miguel Mota and Chris Ackerley have produced here a great, informative, collection of scholarship and Lowry’s writing, and the overall quality of the prose the volume is centred on is thankfully higher than Lowry’s words in 2014’s In Ballast to the White Sea: A Scholarly Edition. Here, we get three engaging but imperfect versions of the same narrative, and given that this is how Lowry left this story, it’s no surprise that Margerie wanted to fix it up and make it look sharp before she showed it to the world (other than France). Lunar Caustic as published in 1968 may well be a false text, an imaginary edit not produced by the man whose name is on the cover, but it irons out several of the problems that existed in both Swinging the Maelstrom and The Last Address.

This book is a useful publication for scholarship, and contains two and a half imperfect versions of something that is – even with its flaws – a great read. I’m glad there are still several books of Lowry’s I haven’t yet read. Exciting stuff ahead!

Swinging the Maelstrom: A Critical Edition is published by University of Ottawa Press.

1. Except for possibly I is the Way, which I haven’t reread since I scrawled it out, sober and hate-filled, on the camino de santiago. ↩

1 comment on “Swinging the Maelstrom: A Critical Edition by Malcolm Lowry”