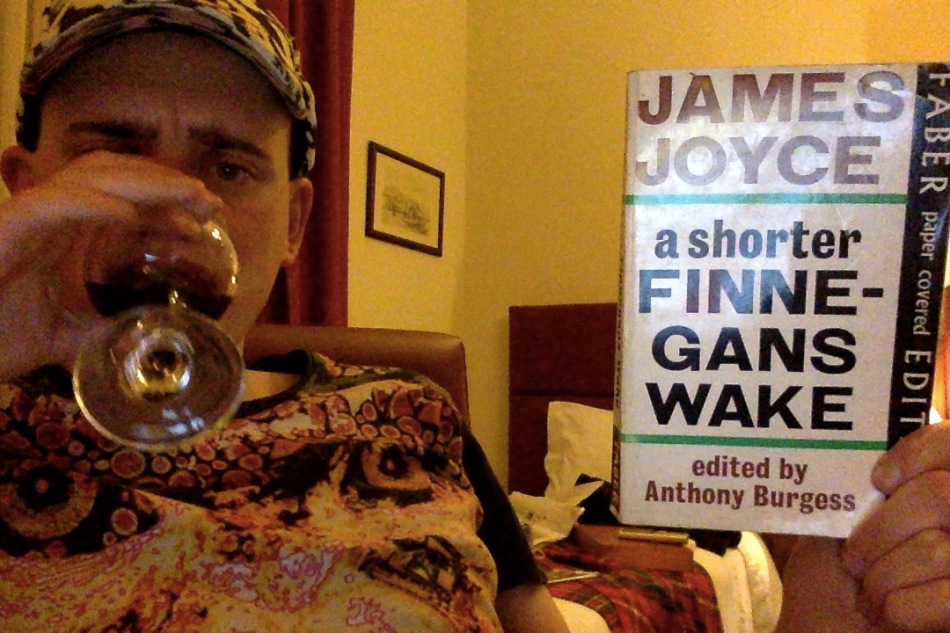 Anthony Burgess was a solid literary chap. He wrote intensely researched and richly imagined novels set in all sorts of disparate locations and periods, most famously the achingly iconic A Clockwork Orange. (Other books include A Dead Man in Deptford, click for my view.) What Burgess was interested in – and look up here his never-ending output – was language, was the power of new and/or old language to lift a piece by evidencing and influencing and emphasising its narrative. In the two novels mentioned above, Burgess – in one book – invents a language of future slang and – in the other – resurrects an Elizabethan one. Burgess was swiftly intelligent and a prolific writer of complex – and popular – literary texts, so it is perhaps unsurprising that when the world wanted an abridged and unacademically annotated version of James Joyce’s massive Finnegans Wake, it was Burgess who answered the call.

In A Shorter Finnegans Wake, Burgess’ mission – as discussed in a lengthy introduction – is to chop out massive swathes of Joycean prose in order to bring the text to the reading level of the [pretty well educated] reader in the street. Joyce’s text is reduced to just over a third of its original length, and regular paragraphs are inserted in square brackets to explain plot and/or meaning. By this I don’t mean that Burgess’ inserts explain the plot that is absent due to abridgement, rather that they explain the plot as remains, because even in this truncated, annotated, form, the narrative of Finnegans Wake is still fucking impossible to understand.

This is not a criticism: Finnegans Wake is not a book that is meant to be understood without effort, it is one so loaded with meaning and wordplay and allusion that reading it in this form in this way is never going to offer the experience Joyce wanted his readers to have. Joyce’s final novel asks more of a reader than any other writer ever has, ever does and – I guarantee it – ever will, and he does this because he was a self-important, self-aggrandising, self-mythologising, smug, intellectual snob. And Anthony Burgess, “bless ‘im”, can try to make this accessible, but it’s like he’s trying to fend off an army of knife-wielding killas when he’s just an old English novelist: he’s never going to win. Joyce’s prose – as good as it is – isn’t aimed at people who aren’t reading Finnegans Wake as a full-time job for a semester.

Finnegans Wake isn’t a book that one is meant to enjoy in the way one enjoys something frothy, of course not, but because Joyce veils his (once very evident) deeply felt understanding of what it means to be human (read Dubliners RIGHT NOW if you haven’t) under an avalanche of difficult intellectual guff, Finnegans Wake offers very little opportunity for catharsis, which is the point of art, right? This book didn’t make me cry, it didn’t make me feel pain or empathy for any character. I wasn’t emotionally engaged, not properly, and I couldn’t understand enough of what was happening to be intellectually engaged either.

To be fair, Finnegans Wake did make me laugh several times (more later) and at one point I got an erection while reading, but I think that was actually because I was bored by the text and daydreaming. Then again, the erotic fantasy I slipped into was Joycean-tinged, inspired by what was going on in the text, because Finnegans Wake is like a dream, like a fantasy, like a trip. This is reading as an intoxicating experience – reading Finnegans Wake without the intellectual capacity and research facilities it demands is like trying to meditate when you’ve had 20 espressos: impossible to do right, but still a unique experience you’re unable to absolutely define as unpleasant. I’m not clever enough or willing to dedicate the necessary amount of time to understand Finnegans Wake fully, but the experience of diving into 300 pages of borderline nonsense is an oddly pleasant one.

Burgess’ edit is directly asking a reader to do this, thereby ignoring Joyce’s intended reading experience. A Shorter Finnegans Wake is for people who don’t have the time or inclination to sit with a thick volume of Joyce in a library after years of linguistic study and dissect every sentence (which Burgess assures us is worth doing). Burgess offers us an edit of Finnegans Wake that can be read during a commute, on a beach or on a flight, whilst taking a dump, when waiting for a friend in a trendy wine bar: he has edited Joyce down so that we are able to approach the text in a way the writer did not want. This is Finnegans Wake as if it is a “normal” book for “normal” people meant to be read in a “normal” way. It’s not, though. This is not what Finnegans Wake is for, but it does have some unexpected merits when read like this. Not really enough, though.

We are in a dream, the dream of the landlord of a pub outside Dublin whose life has been destroyed after he molested his daughter in a public park. He is executed and his sons rise to be kings of his domain (which extends beyond the pub) until they are usurped and the River Liffey washes all away into the sea.

That may be wrong.

But it doesn’t matter. The ending, when the narrative voice becomes the water, is beautiful. There is a two or three page section where the protagonist lists all the nicknames he’s been called in his life, which sounds a lot like that BrassEye scene where Chris Morris lists fake words for paedophile (see video at bottom of post) and that made me howl with laughter, as did a few other sections. Other than that, a reader is buffeted about, from inside to outside from the depths of prehistory to the very modern 1930s. References slip from obscure worldwide myths and language from all eras, and there even seem to be calls forward to ideas that postdate Joyce’s writing and death. That’s the effect of deja vu, though, that’s the reader’s mind having been sucked in so deep that it can be spat back out.

This is a book filled with noises and language as sound, rather than language as the vehicle of an idea. Whole sentences can be read that fail to translate into meaning with any immediacy, though I’m sure they do so given attention. I forced my way through this and had a discombobulating time: I felt dreamlike, I felt tied within thoughts that I couldn’t control and weren’t real. Nothing I’ve ever read has quite captured the experience of being within a dream like this before, nothing has ever kept me captivated but confused, and a different kind of confused to how I’ve often found myself with “difficult” novels. I only understood at about four or five points in the whole book “what was going on”, but that didn’t matter. What I was being forced to do was confront my understanding of what literature is, what language is, especially when it’s detached from meaning.

If I was more cleverer or had more time, I could read the whole of Finnegans Wake and understand it as a dynastic epic chronicling the entire history of Ireland, or something, maybe. But as it is, as I read it here, it’s an experience of a dream, and it left me by turns amused, confused, impressed and – once, maybe coincidentally – sprung. An odd book, and one I won’t necessarily recommend, unless you’re willing to do it properly (i.e. unabridged, full annotation, JSTOR access). Intriguing, though. Certainly intriguing.

Here’s some funnies as a treat: