Cubby is my dog. He is named after the film producer Albert “Cubby” Broccoli, and in many ways he is like a bear cub. He is fluffy and cuddly, affectionate and occasionally aggressive. He has been in my life for just over a year, and he has been the most positive living influence on me since childhood. He is kind to me, he cares about me, he wants to be near me without exploiting me, he licks my face but doesn’t demand I get my cock out, he holds me when he sleeps and we are happy when we are together. He reminded me that I am able to feel empathy (I also recently felt happy on behalf of a friend, which I wouldn’t have believed possible six months ago – maybe the dog is, slowly, fixing my broken soul – imagine that, though, happy because someone else, real, was happy) and has given me a living thing to love, be responsible for and care about deeply. Why then, wouldn’t I read a children’s book about a small, flooffy dog named Cubby?

The fact that there exists a children’s picture book about an adventure-having dog named Cubby with an owner (who loves him very much) called Scott is not a coincidence: this was a gift my sister had made for me for Christmas, using a service on the internet (people younger than us have mad online skills. This was the first time I’d known someone order something mood-altering off the internet since I was a student and that plant fertiliser you could get high off was legal and trendy for a bit). My sister typed into some boxes my name, my dog’s name and – I imagine – a vague description of the pooch, and then some automatic bots added my name, my boy’s name and said image into all the relevant holes of a pdf that could then be printed, packaged, mailed out and gifted. It’s a pleasing gesture, but is the book worth reading in its own right, or only engaging as a one-off novelty present? Let’s explore.

The narrative is pretty simple, and very much geared towards children/kiddies/the underread. Cubby – a fictionalised version of my Cubby, my boy, my lad, my handsome prince, the king of my heart and the emperor of my soul – is stultifying in a mediocre existence in London (I can empathise with that! #someonekillme) and decides to head over to Hollywoof to become a dog celebrity. He keeps urinating in places he shouldn’t (I keep not urinating in places I should) and so can’t get any great dog acting jobs, but then buys himself a saxophone and becomes a viral superstar off the back of his YouChew dog musician antics. He moves from online to mainstream, a true superstar, meets the president (I bet the current one would be up for organising meetings with dogs that can do tricks, ammaright #satire) before realising that all this wealth and fame is worth less than a cuddle with Scott – the fictionalised one – and flies back to the UK to be reunited in a sweet cuddle with me. The fucking idiot. 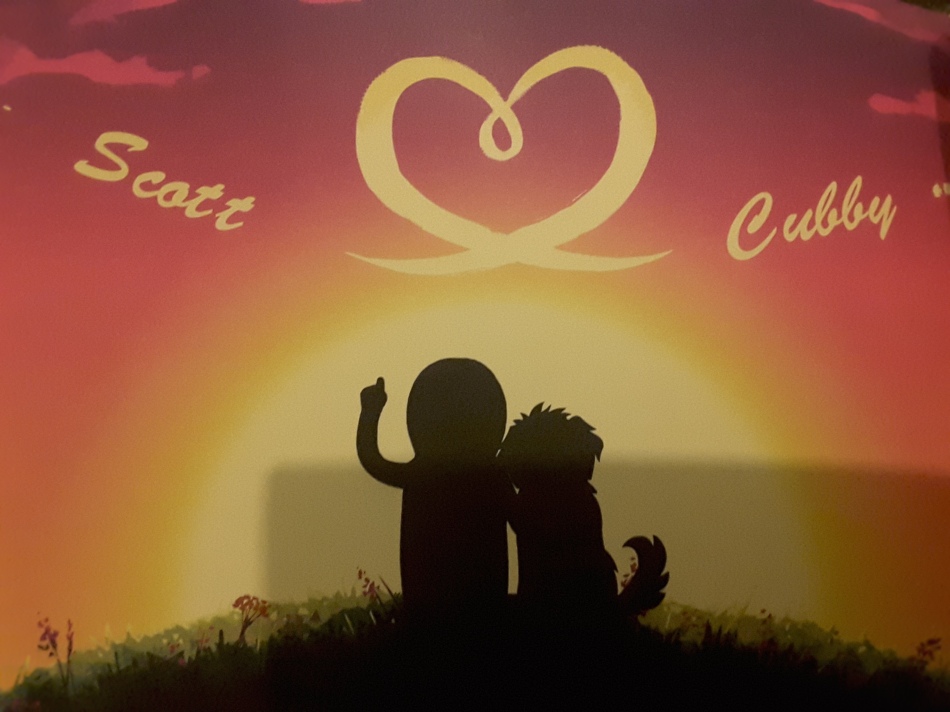 The plot is unsatisfying on several levels. but probably most significantly the fact that all the affluence accrued by the dog is left behind when he returns to fictional me. Obviously, the fictionalised me (if he was anything like the real me or anything like a real person) would be broken hearted if his dog ran away, deliberately and without regret. The Scott in the book, however, seems barely perturbed, which means that his love for Cubby is either so massive it is unswayed by distance or so minor that he doesn’t care the dog’s gone away. My love for Cubby is a source of great joy, however it is his presence, his animal warmth and literal attention that makes me happy, rather than the idea of him. I want to be asleep near him, I want him to lick me (only on the face and shoulders, it’s not sexual) awake, I want him to be excited when we are reunited after a few hours apart. I want to experience his love (well, his dog equivalent of love), rather than merely believe in it as an abstract concept. And the character in this book seems to care little about the dog’s distance in a way I found unbelievable. The only way I’d forgive the dog for voluntarily leaving me for an extended period was if he came back with loads and loads of money – but the Cubby in this tale leaves all his success behind. What a waste of time.

The real problem with this text, though, is the terrible scansion of its rhyming couplets. The whole thing is written in verse, however as “Scott”, “Cubby” and “London” have been dropped into a heap of javascript gaps, there are understandable problems with line length in some places. However – and this is what proves the irony of Cleverley’s name – even many of the couplets that DON’T have auto-filled in (or missing) syllables don’t scan. The verses are tossed off, phrasing is often weird, including at one point Scott describing Cubby as a “silly goat”, presumably because “goat” rhymes with the final sound of the previous line. Cleverley clearly doesn’t know what “goat” means, because there is nothing at all in his narrative to suggest its appropriateness, and the mere fact of the book’s child-friendly look would be pretty false if the second half turned into a fictionalised version of my dog on a shag marathon. (He’s castrated, so it wouldn’t happen.) Also many rhymes don’t work.

OOH: maybe that would be a good thing for me to try and sell next Christmas, this same product but distinctly adult, where one can send in the name and physical details of another person and receive an Adult book where a fictional avatar becomes a shagging, violent, despicable turd. Maybe people would buy that: personalised, illustrated, lewd adult stories. I’ll look into it.

So, to conclude: Cubby’s Adventures in Petlandia is a fun gift, but not an exciting book. It lacks real characterisation, its poetry doesn’t scan and its narrative is contradictory and reductive. Thanks to my sister for the gift, but bad slams to Cleverley for his writing. Hammond’s illustrations are fine.