I’ve got to write this quite quickly as it’s just past 11am and I have lunch plans because I’ma free-wheeling, happy-go-lucky man about town. Or, more appropriately a #manabouttown.

The fucking anti-depressants have kicked in with a-fucking-vengeance following a wild weekend of letting my hair down (that’s a joke, I have no hair) while working at a festival. Though I’m maintaining my sensible, booze-free sober life most of the time, I did a bit of party and it did me the world of good. I don’t know if it was the temporary removal of my self-imposed strictness over the summer, the fact that I’ve finally sorted out both a job AND a place to live, or merely the chemical-induced beginnings of the fourth week of swallowing these little daily pills, but my mind is suddenly flying bright like the burning-up remnant of the Cassini probe. Look, I’m even tying my ramblings to contemporary news events. I’m a whole new individual.

ANYWAY, whilst enjoying this unexpected ascent into feeling fine most of the time, I read a book I’d been looking forward to for several months, Hold Tight by Jeffrey Boakye. It’s published by Influx Press, the people behind Eley Williams’ wonderful Attrib. and other stories and (well-written, enjoyable, southern-centric Home Counties propaganda) Signal Failure, which I reviewed for Open Pen.

ACTUALLY I’VE GOTTEN TOO DISTRACTED BY TWITTER AND HAVE RUN OUT OF TIME TO WRITE THIS NOW, I WILL RETURN LATER.

It is now several days later and I’m on my way back to London (no, that lunch didn’t go OFF) after having spent a few hours looking at the new moveable structure in which I’ll be living. Yes, for I – a v fucked up and v assetless man – have decided that the best way for me to accrue some property is to take a lesson from the gyptians of Northern Lights and become a vagrant upon the canals. The boat I’m buying is currently moored (nothing to do with Othello, apparently) near Daventry, so I’ve been back and forth to this anonymous bit of England several times over the last few weeks and will continue to do so for another month until I sail it down to London and become the uberhipster I have long threatened to become. There, that’s my news. I’ve also left my phone behind, so expect even fewer Instagram posts than usual for a few days. (Follow me on Instagram: @scottandcubby)

So, I’m now finally cracking down to write about Hold Tight, ten days after finishing reading it. The book is about grime, a genre of music which I knew little to nothing about. Despite this, when I first read about Hold Tight, many months ago, it sounded like something I wanted to read. So much so, that I effectively ordered my copy in advance by contributing to Influx’s 2017 crowd-funding campaign. (I don’t remember if it was through Kickstarter or one of their less successfully-branded rivals.) Why would I – a man who has already expressed an ignorance of the central topic of Hold Tight – be so excited about reading it I would order it in advance? This is particularly pertinent a question given how infrequently I plan things in advance, or at least how infrequently I used to plan things in advance. I’m a different man, now, bouncing off the ceiling on this fucking medication and the fact that I have a five-year-plan that could, nay should, deliver me the life I’ve dreamed of for as long as I can remember. For reference, it’s nothing like the life I’ve had before and nothing like the life I ever allowed myself to work towards before. I’m tired, but I’m working.

Hold Tight – sorry, getting distracted, I’m not doing this regularly enough to stay on top of putting my news, feelings and non-book related opinions down – is not just about grime, but it is also – as it states in its subtitle – about Black Masculinity, Millennials & the Meaning of Grime. That’s right, I read yet another book on race and gender, though this one from the perspective of a Black Briton, rather than a Black American.

Much like Jean-Philippe Toussaint’s Football and Norman Mailer’s The Fight, I was primarily excited to read this book on grime not because of what it could tell me about its central topic, but because of what it could tell me about identities and the way this topic, as a cultural product, affects and represents them. Boakye grew up working class and black in London, in the same parts of the city and at the same time as many of grime’s most prominent artists. However, he was not a part of the “scene” and he is not writing a book about being part of the scene, he’s writing a book about being a fan, about being a consumer of culture, about being part of a minority demographic that is leading a cultural moment in the UK. Because, now, grime artists are winning major music prizes and getting huge amounts of international acclaim and attention, and it is a genre that comes – firmly and inarguably – out of the black, British, working class creative psyche.

Boakye works as a secondary school teacher and writer, and so his access to grime’s second wave of success – the wave of success that has seen major American musicians collaborate with (or coopt) grime artists – has been assisted by getting to vicariously experience the daily thrill of discovery that the teenagers he works with feel. Think of music, really, and all the greatest experiences you ever had with it were when you were a teenager, right? Maybe it’s just me, but when I was a teenager I could wax lyrical about lyrics and splurge tomes about tones, y’know, because music was something that filled huge parts of my day and consciousness. Teenagers have been like this since the concept of teenagers was invented, in fact the whole idea of popular music, especially popular music that flirts with ideas of being anti-establishment, is rooted in notions of teenage life. Teenage kicks, like, y’know: they are hard to beat and we all remember how and why. Music as an art form, is probably one that many people begin to think cynically of because it is one we are so often asked to think cynically of. Far more than literature, than sculpture, than painting, even more than film and photography, music is introduced as background, we are asked to treat music as something to be ignored. It’s played in places we visit just to talk, it plays in shops and lifts where it is not our focus, and it plays in the background, perhaps as a subtle emotional manipulator, in most film and television. Music is near-omnipresent, and this cheapens it, and it is this reason that it is only commonplace to be wowed by music when young and excited. Then again, maybe the reason why music is everywhere is because it has a universality and a powerfulness that far outweighs the potentiality of other art forms to affect. Maybe teenagers are right and music is the greatest art we have, and we learn to forget that only because we’re forever chasing the lost feelings of youth. Maybe I should be doing that, attending music events and dancing for hours at a time? Maybe I should get into ecstasy, at my age that’ll certainly make being energised easier?

So, Boakye opens his book with about 60 short chapters that chart the history of grime. From a 1970s track with a drum break that would go on to be important, through UK hip-hop of the 80s and 90s, through pop garage and house-garage-grime crossovers through to the establishment of a successful, alternative, music scene, that suddenly kicked itself hard into the mainstream with Dizzee Rascal and then never really went away, although it did become poppier and poppier until a few years ago then it got serious, all grown up, and now we have Skepta winning the Mercury Prize in 2016 and Stormzy being shortlisted the following year. Boakye’s playlist – as he refers to his chapter headings – are filled with information that contextualise and explain the genre and its lyrics and the way in which its MCs characterise themselves and the society in which they live.

It is now my third day sitting down to write this, which is ridiculous. The information imparted to me by the book is fading as I fail to engage with it, but the themes, the topics, the ideas, persist.

So, what Boakye does is introduce the topics, themes, ideas and key players of grime over the “playlist” style initial three quarters of Hold Tight, and he then takes this information and, using a series of theme – rather than song – focused essays, delves deep into the issues he has raised. This is, for me, where the book lifts, and goes from being an informative and discursive book on a potent and culturally significant genre of music to becoming a wide-reaching near state-of-the-nation piece of essayistic writing. Boakye promises to deliver a book exploring black British male identity, and spends three hundred pages threading together a background from which he can leap with intellectual – and often emotional – engagement into this very pertinent theme. Boakye’s writing, shorn of the majority of the book’s formulaic focus on songs, a series of songs, moving chronologically, expands in a way that is deeply rewarding.

As much as I enjoyed learning about a musical genre I know little about, as I have made clear above, music is no longer something I find especially exciting, BUT discussion of ideas related to identity is. I like reading books that take topics I’m not interested in, then investigate them using modes of thought and focus that I already enjoy. Likewise, books that investigate things I do care about but from a perspective I find dull are tiresome to me. I’d rather read a great book about grime than an underwhelming book about depression; also, I’d rather read a great book about football (not an interest of mine) from someone I had no previous knowledge of than read a bad book about football written by one of my favourite writers (read for the writer, not the topic).

Boakye’s prose is informative and engaging when he writes predominantly about grime, and when he then applies this knowledge onto topics that I’m already interested in, I’m very, very excited by his work.

This whole post has been a mess. Sorry to anyone who’s read it this far.

My head is all over the place as this medication works its magic, and I’m still dealing with the fallout from the start of the summer (spent five minutes hiding and crying two days ago, which I haven’t done in a while), and as I begin to realise the difficult and long-term practicalities involved in moving onto and making pleasant this boat I’ve bought.

That’s another aside, and this is way too long, I know.

I need to get myself booked into regular therapy again, I’ll send an email about that now. It’s important to be kind to the self.

Sorry, I need a conclusion about the book. Hold Tight is a great piece of contemporary non-fiction: explorative and engaging for the fan of grime, but well written and intelligent enough to be a cracking read for people with little to no knowledge of the genre. Great stuff.

TIME TO SHAVE MY HEAD THEN WALK MY SLEEPY DOGGY!!! 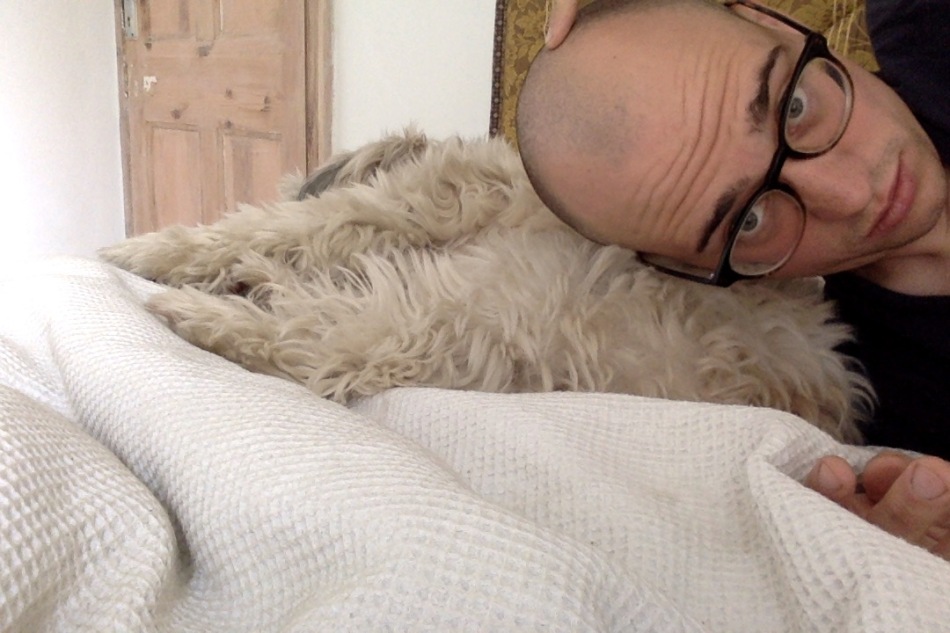