I’ve been trying to be nice to myself, trying to give myself treats. Last week I went horseriding with a friend, this week I paid someone to thread my eyebrows (something I’d wanted to do for years) and then got a friend to paint my nails. I am giving myself treats that will not damage me, that allow me to engage more with the person that I wish to be, deep down, below all my anxieties. I am looking into my soul and trying to decide who and what I will be, now I am freed of the constraints of having another person directing my life. I am my own boss, my own hero, I am no longer a background figure in someone else’s life, I am instead ready to be the central mixed metaphor of my own existence. And choosing to be kind to myself means allowing myself to read books that I think I’m going to enjoy, rather than books I think I should “probably read”.

James Baldwin is a writer I’ve intended to read for years, and he’s a writer I became desperate to read a few months ago, after watching the excellent I Am Not Your Negro. After watching that, back in the Spring, I rush bought a couple of Baldwin’s books. Obviously, then I had a massive breakdown, then my long term partner dumped me, then my friends were like “you’ve had a massive breakdown, you need to go to hospital”, then I bumbled through the summer crying less and less as it went on, and then we reached the Autumn and I’m feeling ready to read and write and maybe even try and get some more fucking writing published in some more fucking places again. Sorry, that sentence fell apart. What I meant to say was that I’m not really mid-breakdown any more, and I’m able to start reading ALL the books I really want to read. I have, this week, read Giovanni’s Room, and I wish I’d read it years ago and I wish I had the other James Baldwin book I own to hand so I could skip on straight to that. 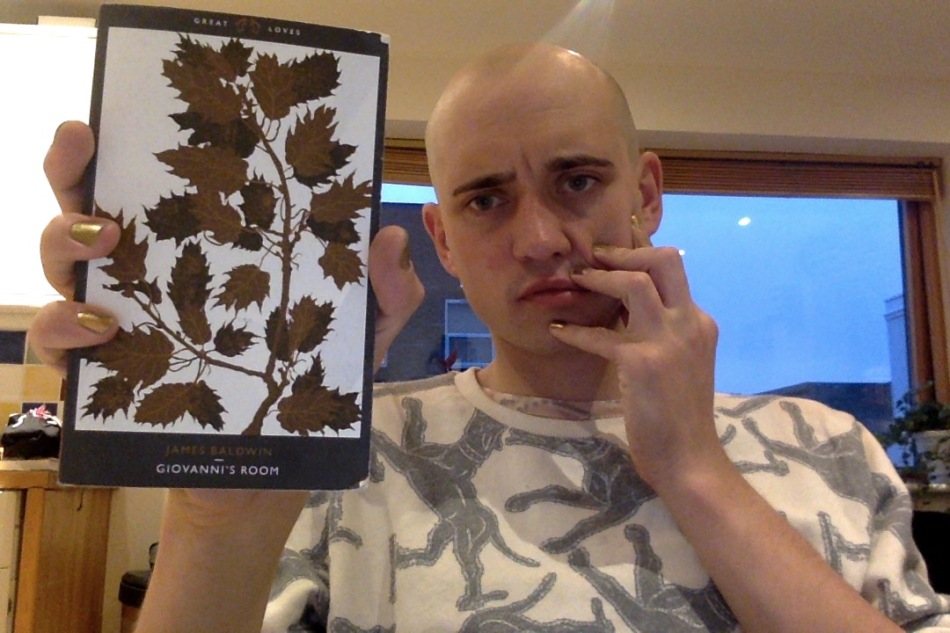 Giovanni’s Room is a novel first published in 1956. It is about David, a young American man, hanging out in France, who falls in love with an Italian man, Giovanni, while his fiancee, Hella, is off travelling around Spain on her own. We begin at the story’s end, with David, the protagonist, alone in a house in the South of France, lamenting that he has lost his man and his woman, and we slip into his memories of love and sex and joy and loss as he swigs his way through several bottles and packs his things. Giovanni is due to be executed, but we do not know why; Hella is gone, but it’s pretty obvious why that is. David has had his first gay love affair (though not first gay experience), and it has affected the way he thinks of himself, the way he thinks of the world and, in particular, the way he thinks of sex and romance. This novel, though in many ways framed as a tragedy, offers a rather compelling narrative about an individual coming to terms with their own very real self, and despite the lonely position of the narrative’s end (and thus the novel’s opening), Baldwin actively presents love and sex as joyful, pleasureful things that – a la that Tennyson quotation – are better to have had and lost than never to have had at all, innit.

Baldwin’s prose is delicate and sensuous, it is unsubtle but inexplicit; Giovanni’s Room is a novel about the headiness of sexuality and the – I imagine – unbridled joy of sexual self-discovery. There is lots of sex here, David has many casual lovers as well as Hella and Giovanni, and the inevitable ending of his relationship with Hella is presented believably and bleakly as befits the text, and his cruelty towards Giovanni when their relationship ends justifies the guilty, self-involved, morose disappointment he exhibits as he drinks and remembers, forgetting to forget.

I’ve never read Baldwin before, and his presentation of romantic homosexual sex must have been pretty “out there” in the mid 50s, but it’s kinda testament to the literary scene of the time that the power of this book was recognised. It is not smutty, even though its protagonist is a bisexual hedonist, it is a beautiful piece of literature that shows what happens when an individual goes far from the life they were expected to lead and begins, instead, to lead the life they want. David is not an especially sympathetic character, in contrast to both Hella and Giovanni, who both love him far more than he ever cares for them, but this presentation of the selfish, sexual, man feels realistic, and if there is a deeper tragedy than that of the lost romances here, it is that David is unable to love those who care for him. The potential for happiness is offered to him by both of his serious lovers, both want him and their futures to be intertwined. He is compelling and charming, and his commencement of a homosexual love affair is treated with much celebration from the middle aged gay men he is friends with, who’d always hoped to be the ones to seduce the American.

Giovanni’s Room is evocative of a place and a time, and redolent with detail and description and dialogue. Baldwin’s writing is fucking gorgeous, and this was a real pleasure to read, and a significant one to read while I’m in this current post-break-up position. It’s easy to forget that love and sex and romance can be sources of happiness, when one has been recently dumped, and reading a book like this, where the highs are juxtaposed with the lows, emphasises the importance of remembering that though, yes, if you lock yourself away in a tower and never tongue anyone ever again, maybe you’ll never cry, but the things you’re missing out on are probably – aside from books, dog ownership and really good wine – the things that really make life worth living.

A pleasure, a joy, a wonderful thing.