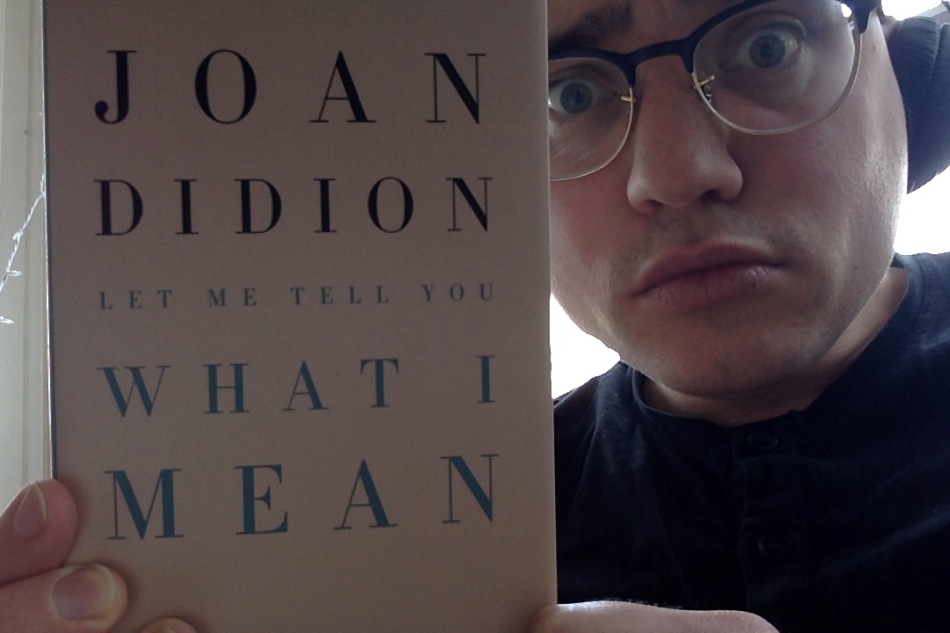 Yes, it’s here, the new (new?) Joan Didion, so to celebrate I’m going to give a tiny tiny tiny comment on every piece included here (excluding the introduction by Hilton Als, unless I change my mind) and then I’m going to get on with my life (lol that’s not happening!)

Changed my mind. This forward is interesting in that it isn’t hagiographic, as things like this mostly are. Als discusses Didion’s themes and preoccupations, but also her inconsistencies. Quoting at length from Didion and Freud, it’s an explorative and nuanced opening to the book. Appropriate, but unimaginable were Didion dead.

This one exemplifies why Didion is such an icon, why she’s a writer who people flock to and have done for decades. This is a piece about how no writing exists without bias, and shit writing that acknowledges its bias is preferable – in a newspaper – to good writing that doesn’t.

Joan Didion visits a Gamblers Anonymous meeting and is v unsympathetic. A bit judgemental, and very much presumes the readership is in agreement with her that claims of gambling addiction are a denial of personal culpability and an attempt to shift blame. But does not “society” itself cause society’s problems?

This one’s more like it. Didion takes a visit to a neogothic folly type mansion built by a silver magnate at the top of a hill in California. Having only seen it before from the road, she laments the loss of mystery now it is merely a public, touristic, site.

This piece was the first I emoted with, hard, tho for personal reasons. I, like Joan Didion, was unchosen by the college of my choice, and tho there was a certain inevitability to my rejection, it still hurt. It’s reassuring to know it’s ordinary to be haunted by lost futures.

So far, these are short, originally columns from a weekly series. This one, included in an even shorter form in The White Album, is a profile of Nancy Reagan. She is aloof, distant with her son and presented as both dull and arrogant. No offence, Joan, but I don’t care.

Didion attends a reunion for fighter pilots from the second world war. A lot of the men now have children, some boys, and some of these sons have already been sent to Vietnam. War is different, they reflect, when you’re the father who stays and not the son who leaves.

Ok, new decade! Like all the best, Didion writes to know herself better. She discusses how she creates fiction, by beginning from a striking, unforgettable image and expanding outwards, discovering why and how that moment stuck. More complex thought and evaluation expands literary value: a great, brief, essay on Craft.

The title recalls BS Johnson and the close to his axiom: “… is telling lies.” Didion – especially as her career developed – moved away from fiction (a shame, as her novels are wonderful) and this essay is about the final time she wrote short fiction. On rejection and being edited: it’s great!

This essay was originally published as the introduction to a book of photography by Robert Mapplethorpe, the celebrity ‘n’ photographer of the late 20th century. Didion discusses her experiences around photographers (particularly in relation to her early career stint at Vogue), and explores the ways Mapplethorpe described his own work.

This was the introduction to the memoirs of Tony Richardson, a film director and close family friend of Didion, her husband and her daughter, Quintana. Richardson – Vanessa Redgrave’s ex – died of complications related to AIDS in 1991, and Didion’s grief is apparent. A foreshadowing of Grief’s prominence in her work.

Joan Didion on Ernest Hemingway: is the greatest crossover event in history? In response to the announcement of the forthcoming (and 37 years posthumous) True At First Light, Didion argues that editing and sharing the unpublished writing of someone who took such care with each word is appalling and unjustifiable.

This is an essay about Martha Stewart, the American celebrity. I don’t know much about her other than she had some kind of money-related scandal, which I expected this to discuss. It didn’t, that was 2004, years later. Instead its about the purpose of celebrity, the deification of the famous.

Well, I enjoyed several of these pieces a lot, but just like South and West, it isn’t a true “new Joan Didion”. Ending with an essay on idolisation and the commodification of personality leads my attention to linger on the likelihood of more Didion “books” like this: good enough to buy and enjoy, but an afterthought, an aftertaste, to the books and essays that were published when they were timely and when they were new.

Yeah, this is more than 50 words, but it doesn’t matter. I don’t know why I kept to that rule (maybe I didn’t, I didn’t double check). I recently wrote that sticking to rigid formal constraints is the sign of a writer having run out of anything to say lol.

Listen to my novelty XXXmas song on Spotify

donate to triumph of the now?

there are cost involved in this, financial as well as psychological/social. please give generously. I can offer a pdf of SCAT TO BE POO as thanks for any donations, though you can just donate money with nothing in return. Thank you for your support, blog readers!