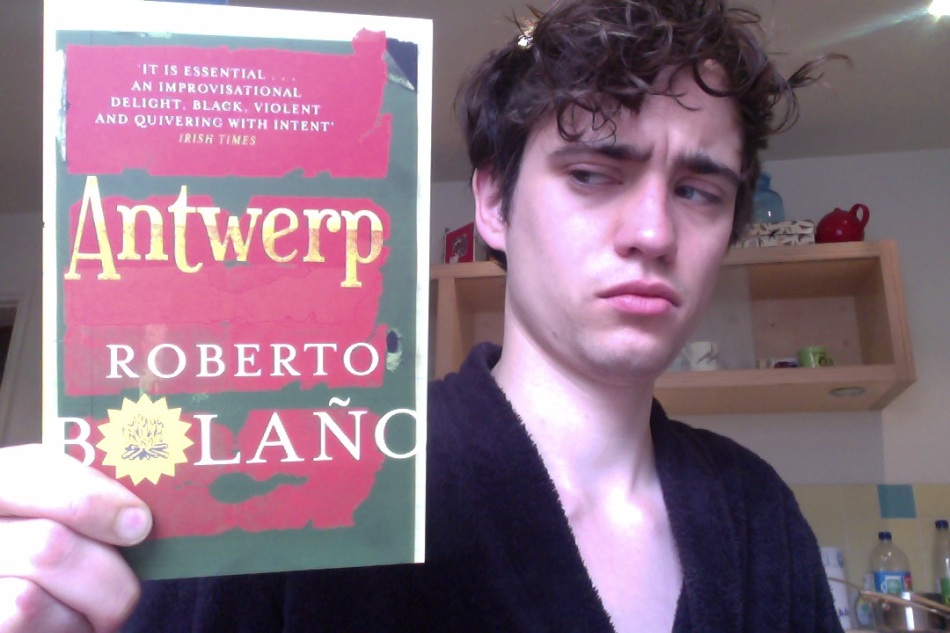 Several people have told me to read Roberto Bolaño. Three I can name, maybe even as many as four or five I can’t. I’ve always resisted, I don’t know why. Possibly the large size of SOME of his books, possibly because I’ve been trying to learn Spanish for a year and am mentally putting off translated texts until I can read them in their original lengua in a few years’ time. Arrogant procrastination, perhaps. I should have crumbled and bought The Savage Detectives. Instead I bought the thinnest Bolaño I’d ever seen when I had been in a bookshop so long I felt obliged to buy something. Rain. Somewhere cold. Killing time. So I bought Antwerp. Entirely because of its length. Not something I usually do or something I will do again.

Antwerp is 78 thick, large-print pages. It is 56 chapters, some about the process of writing, some about sex, murders, cinema, some about a hunchback, some about a murder victim, some about a detective, some about Roberto Bolaño. It is set, largely, in Barcelona, at a deserted fairground where a murder has happened. But there are digressions, leaps, flashes of memory, constant changes of perspective, location, motive, tone, feeling… Though it was well-written, there were many arresting/beautiful/compelling images, some impressive and evocative use of form… as a whole it felt much more like a posthumous fanboy treat of collected early, semi-poetic vignettes than as a fully-fledged and realised novel.

Written over 20 years before it was published, and published only about a year before Bolaño’s death, it is really a series of prose poems with shared themes, people and settings. Which is fine. It is good for what it is, it was compelling and visually experimental and the kind of thing I’d probably have loved if I’d come to it as a fan of the writer’s work… For though it is intriguing as a stylistic piece, I would describe it more as a “collection” than as a single work. I liked it, yes. But the mistake I made was starting my reading of a writer I am likely to very much enjoy with a book so steeped in brevity. There’s not much of it. What’s there is good, but it felt very much like it was “one for the fans”. Which maybe one day I will be. Just not yet…

2 comments on “Antwerp by Roberto Bolaño”