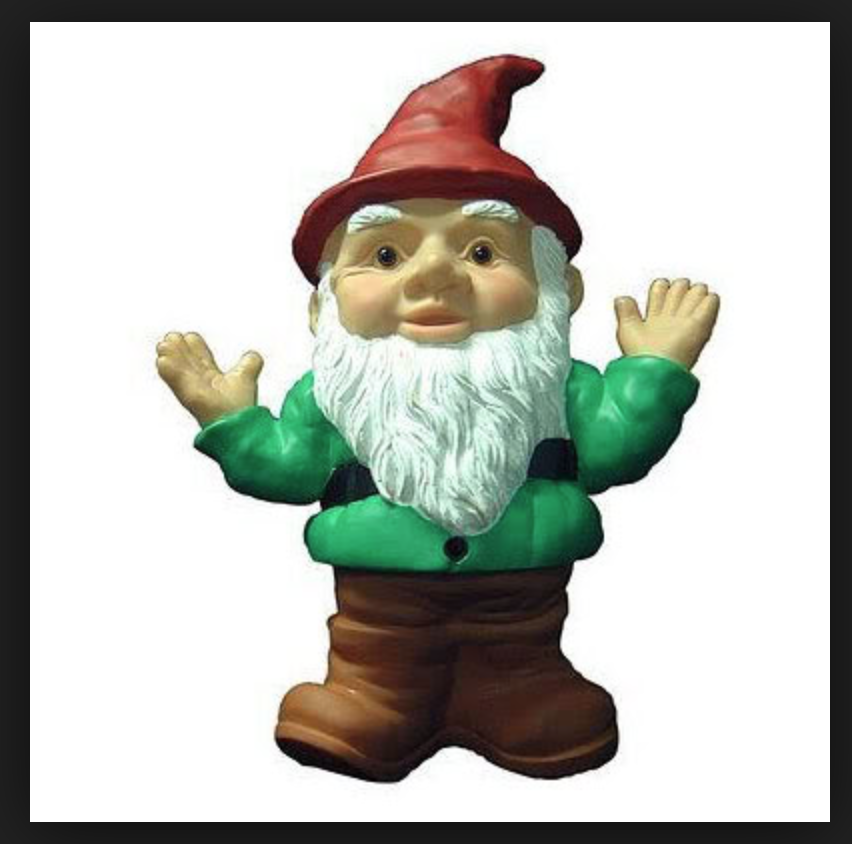 Earlier today I passed a man who looked just like a gnome. Minus the hat. He was hatless. And hairless. Like hatless gnomes often are. I would like to immediately point out that what I’m writing here is not a mean, cruel, tirade against someone’s appearance. That’s not my bag. Any more. What this is instead about is the man’s choice of clothes. Because he was dressed like a gnome too.

Fat, bald, a raggedy white beard tapering to a point a little above the line that goes through both nipples, just before his pot belly began to stick out, thrusting up beneath a tight, sky blue, long-sleeved t-shirt. Like a gnome. A garden gnome. His trousers – bright green, loose, not trousers, shorts. Or maybe just too short. No leg on show, but his boots visible, visible, visible, his socks, too, over the top. Pulled tight over his shins. Boots stumpy, brown, unflattering. Aged about fifty. (The man, not the boots) Maybe nearer forty. Early-middle-age. Like a gnome?

Several of these things are unchangeable – his age, his height, his hairloss, to some extent his weight… But the vast majority of the factors that made him look like a gnome were entirely within his choosing. The clothing he was wearing, crucially. He must know, as a middle-aged short man with a beard, that he looks a little bit like a gnome. Like a common, or garden, gnome. At some point a mean-spirited person will have called him a gnome. I can guarantee it. 100%. But rather than shave and try to slim down a little, he has instead decided to dive head fucking first into the world of self-parody and DRESS like a gnome. Bright green trousers. Long-sleeved blue t-shirt. Dressing like a gnome. Hiding in plain sight? From what? Fancy dress? A costume? I don’t know, I’m behaving as if not.

I saw today, earlier, a man who looked like a joke. Who looked like something people put in gardens because they’re too ugly to display in a house. (Right?) This man was taking an insult, taking a snide remark and reclaiming it. By emphasising the fact that he looks like a gnome, he stops other people from using it as an insult. By becoming a parody of a man of his age, height, facial hair choice, he is elevating himself into the unimpeachable. He has impeached himself. He has made the obvious joke. He has been the bigger, the better, man.

Now I’m not going to recommend self-abuse as a way to prevent bullying, as a way to temper meanness… But for this guy it was clearly working. He was happy, he was smiling, he was free. Whatever that means. Though I don’t aim to (or want to) dress like a gnome, I can understand why a man in his position has chosen to do so. People may fear the unexpected, but people more consciously fear the pains they have known before. The click in a new acquaintance’s eye as he or she realises where he or she recognises him from… a late maiden aunt’s garden, a B&Q, a Homebase, a, a, a… That’s the pain he is avoiding. By putting that comparison at the forefront, at the opening of all interactions, he is saving himself the pain later on in the friendship, relationship, whatever.

He is brave, brave because he is acting through fear and combatting it. Facing the fear, getting the event out of the way, engaging with the terror itself rather than with the terror of fear. Brave. A brave, little, man. And I say that with no guilt because I’m pretty certain a man that brave can handle it.

0 comments on “On Seeing A Man Who Looked Just Like A Gnome.”