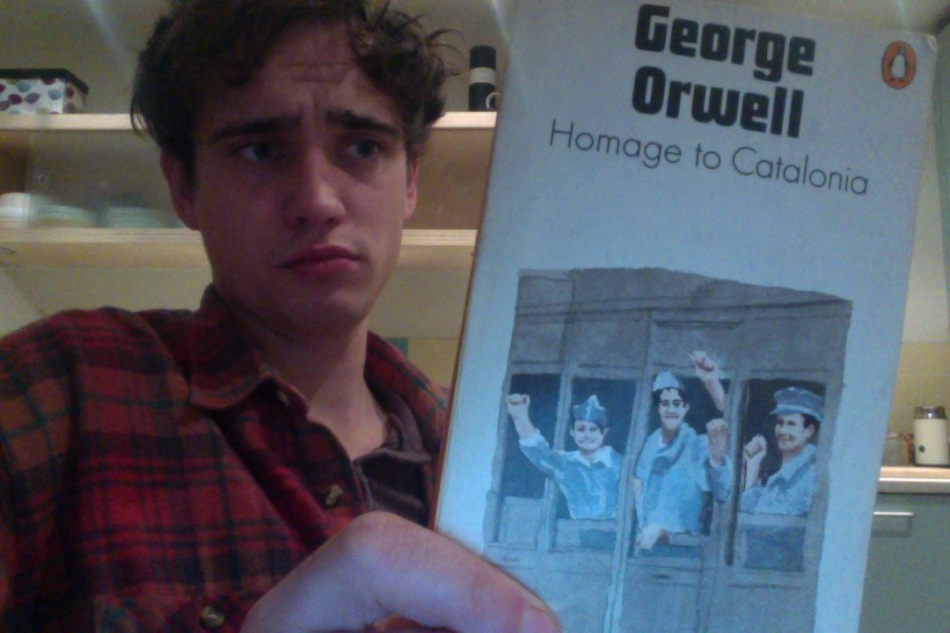 I had been intending to read George Orwell’s Homage To Catalonia ever since I encountered Down And Out In Paris And London, an excellent and informative read. This war memoir-cum-history text-slash-political essay of a book did not disappoint, for I have ended the day with far more knowledge of the Spanish Civil War than I began it with. I’ve also laughed, been gripped by tense excitement and thought too about the wide fascistic spread than engulfed Europe during the 1930s.

I have read, of course, Hemingway’s For Whom The Bell Tolls, and also Laurie Lee’s As I Walked Out One Midsummer Morning, so this is a period of history that I have an interest in, but one I was shocked to discover I was massively under-informed about as I read Orwell. I had always believed that the Spanish Civil War was a very straightforward affair – evil right wing Franco against the sainted International Communist party*, which for some reason was representing the previous government of Spain. Whilst in Homage to Catalonia, Orwell does narrate many actions and activities within shot or sight of the fascist lines, the real focus is the infighting, back in Barcelona, between the various factions of the supposed Left who theoretically form one force. The Anarchists, the trade union-affiliated militias, the Communists, the Civil Guard, the parts of the official army that have not joined in with Franco… Everyone is suspicious of everyone else, each individual interest group wants control of all, to the point where Orwell’s real conclusion is that Franco’s forces succeeded solely because they were fighting a divided army. This ending is tempered by an essay added onto the end of the book, ‘Looking Back On The Spanish War’ (written in 1943) where the blame is instead  laid at the feet of the French and the British for failing to aid the attacked Spanish government.

This is a highly politicised text, offering several chapters of newspaper/propaganda analysis, of backstory historicisations, of explanations of the development of the various factions that Orwell (or Eric) encountered. His descriptions of battle are harrowing, but his ability to make light of serious situations (frequently berating the inefficiency and poor shooting of the Spanish, for example, as one or the other facilitates a narrow escape from a dangerous situation) stops the book from being a dry tract. He admits to bias, he reiterates the fact that his words reflect his experience, and he makes friends, names people, humanises the enemy…

This is a good book about a thinking man making a bold step to stand by his convictions and, quite literally, risk his life to do so. It taught me a lot and it kept me entertained. A triumph.

* Backed up by Picasso, Lorca, Orwell, Hemingway, Auden, Lee and whoever fucking else was cool, what’s the Nancy Mitford novel where someone runs off to fight??? EVERYONE WAS THERE!!!