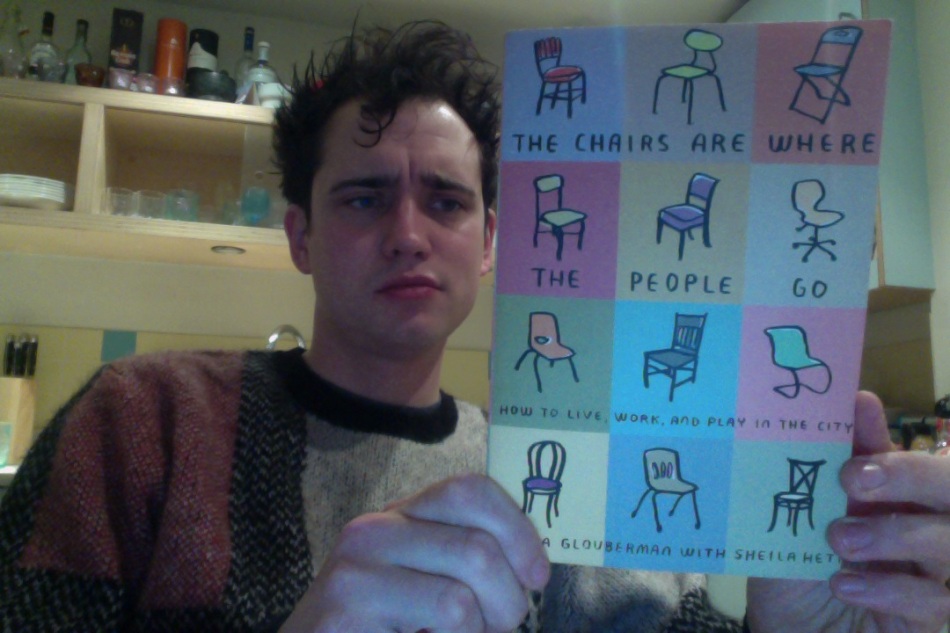 The Chairs Are Where The People Go is a strange book, and a highly-acclaimed one. It’s semi-written by Sheila Heti, author of the rather special How Should A Person Be? (my review here), and is her recording/rewriting/editing the thoughts and opinions of her friend Misha Glouberman. Misha’s “voice” forms the text, and the book is a series of 72 short sections (ranging in length from a sentence to several pages) that discuss life in contemporary cities. The Chairs Are Where The People Go is about the difficulties of communication and self-expression, about ideas of love and romance, about theatre, about art, about friendships, about contemporary society and about self-knowledge. In many places it is informative and eye-opening and quite genuinely deep, but in several sections I found Glouberman to be an almost painfully irritating individual.

Glouberman self-defines as ‘a performer, facilitator, and artist’*, but he spends far more time talking about the games he plays in the classes he organises. He is into ‘noise art’ and teaching people (but never actors) improvisation skills. He leads classes where people learn how to play charades to tournament level, despite believing that there are no such things. He leads local resident campaigns to get bars and nightclubs closed down. He opposes gentrification yet, as an artsy, former computer programmer turned entrepreneur running conferences and weird training classes, he is the absolute fucking epitome of gentrification in the previously run-down district of Toronto he lives in and laments the changes of. I’ve looked him up online, when in the midst of that paragraph, and found a YouTube video of him in a bad suit, giving ‘communication advice’ from his position as a ‘communication expert’. This, naturally, hardened my attitude to the man and made me less likely to be forgiving of his games.

Which is, alas, unfair.

Because The Chairs Are Where The People Go excels in many respects. When Glouberman (and Heti) discuss love and romance they do it with a lot of insight and a wise understanding. When they speak about city planning, they are informed. When they talk about ideas of communication and compromise they are enlightened and efficient. Even when Misha offers a page of ‘Hard Charades Clues’, he is amusing and witty and made me laugh. When he discusses using a suit as a way to quit smoking (once he stopped smoking, he decided to wear a suit instead of smoking cigarettes, as a reward for not smoking, and as a way to make clear that he had ‘changed’) he is very funny. When Heti and Glouberman offer ideas about what makes people be friends with each other and how people can become friends, when they discuss the risk of loneliness and alienation when one moves to a strange city or anywhere, really, without a structure to fall into, they are kind and considerate and helpful. The book offers tips on how to connect with people, recommendations on how to secure the kind of life you want, explanations on why the 21st-century attitude towards marriage is likely to result in far less divorces that the attitudes of the second half of the century before.

In short, frequently and often, there are moments of greatness in here. The book made me smile a lot, made me laugh a few times, brought me close to tears. But, alas, it also frequently made me roll my eyes at the ludicrous level of gravitas the text gives to Misha’s charades and improvisation classes. The first few times, they are interesting, but with their frequency and the attitude expressed within them, there is the real risk of Misha coming across as a little smug, which is something I don’t like. The section that contains the most smugness is the one discussing Glouberman’s experiences at Harvard. He spends a lot of time talking about how important it makes people, how connected he’d be if he didn’t live in Toronto, how self-involved it is (as if not in Boston), how little he liked it while he was there and how much he sees the created connections as a wasted opportunity when he returned to Canada (where he’s from). But this is bullshit – Glouberman is part of a cultural elite, writing a book here with Sheila Heti, who’s a major literary name. He is someone able to live off his creative and artistic endeavours and, as he frequently points out, had a very remunerative career before he decided to pursue the Arts. Nothing I’m sure, to do with Harvard’s name on his CV. He has been successful in one career (IT), and is now successful in another, unless one solely views success in monetary terms**. He also talks about being actively involved in the Harvard Alumni network, which hardly strikes me as the actions of someone jaded by their education.

I don’t know, though, what my overall thoughts on The Chairs Are Where The People Go are. I liked it, lots of it. I truly felt like huge swathes of the text were informative, charming, thought-provoking and deeply relevant to the modern world. But I did, alas, find Misha’s voice a little too self-important and lacking (just a tiny bit) in self-awareness – see my comments about gentrification and Harvard. I liked it, I suppose, but I definitely didn’t love it.

* Note the Oxford comma, the godawful perils of reading a North American edition.

** Which I hope no one reading this does.