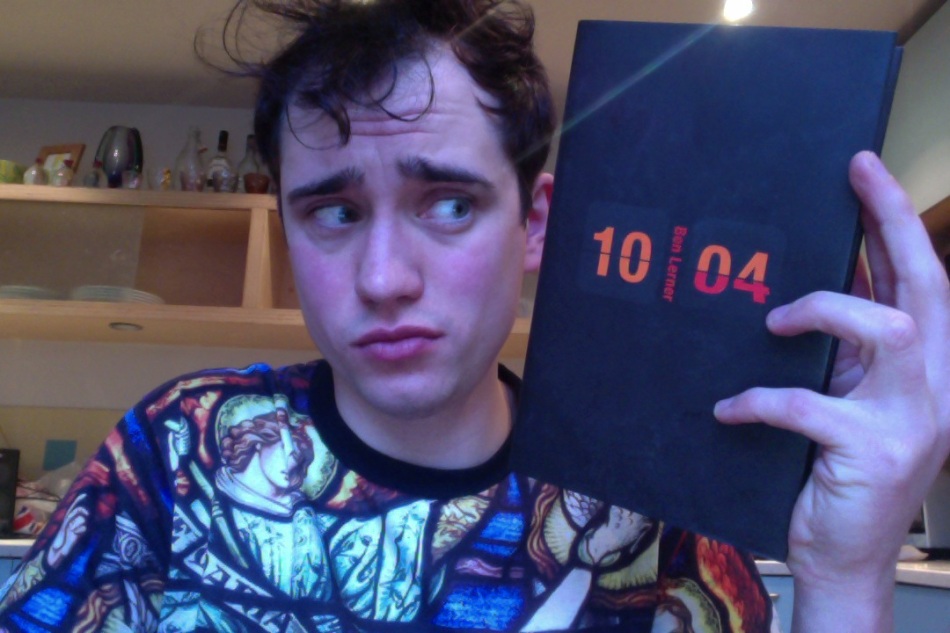 Well, I just wrote a huge, gushing review of this and then my computer crashed and deleted it. So, with no detail, with no aplomb, here is a rushed review of Ben Lerner’s 10:04, which is without a doubt the best book I’ve read for months.

The novel is beautiful, is gorgeous, is evocative. It is funny and sad and mature and deep. It feels both rushed and crafted, both effortless and complex. 10:04 is a loosely autobiographical novel (like Leaving the Atocha Station, his first novel, but closer to reality) about a writer in his thirties living most of a year in New York. The book opens with several scenes in succession that explain the various plot threads that weave neatly into an impressive whole: The narrator’s best friend has asked him to donate sperm so she can have a child; the narrator has been diagnosed with a possibly fatal heart condition; the narrator has received a huge cash advance for the second novel that will eventually become 10:04, even though the initial premise is hugely different.

The novel is almost like a collage, taking narratives and stories from different people and retelling them. These stories are about race, identity, disease, the Challenger disaster; about ketamine use and weird art projects and mental breakdowns. Although it is easy to see many parts of the novel as episodes (several parts were published as standalone pieces), they combine into a fresh and experimental structure that offers a wide and deeply layered evocation of a personality and an impressive rendering of the creative process as the narrator’s initial idea for a novel turns into 10:04. It also plays deeply with narrative rules.

Lerner takes stories from other people and appropriates them to himself, or to different characters, but then sometimes replaces them onto the characters that they “should” have come from, or even offers them to other people as well. Does my description there make sense? The book is “meta”, I suppose, in that respect, and Lerner writes a lot about considering the future from the past, about narratives “spidering out”, about Marty McFly’s fading photograph in Back To The Future. One section contains several extracts from a long narrative poem, and within this, Lerner plays deeply with time, looping from moment to moment, skipping days or weeks with a single word. It is gorgeous writing, “That was fucking glorious” was what I sighed to myself as I closed the volume. It’s a marvel, it’s a joy to read, and it’s deeply engaging on a range of topics.

To sum up, 10:04 is like Leaving the Atocha Station, but with more self-indulgence, more experimentation and less marijuana, which was everything I hoped it would be.

Gorgeous. It made me cry, it made me laugh, it taught me a few things I didn’t know. Dinosaurs and sex and cancer and wanking in a doctor’s room and 24-hour installation artworks and parties and socialising and generosity and confusion about the meaning of adult existence. This is a big, wise, novel and you would do well to read it.