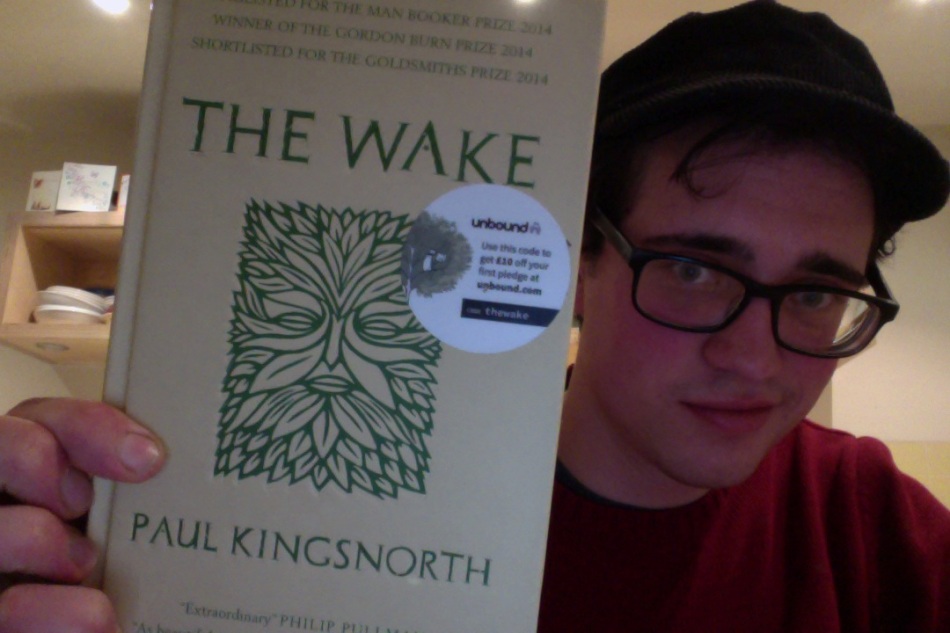 The Wake by Paul Kingsnorth was a surprising literary hit of 2014. Not a “literary hit” in that it sold millions of copies and wasn’t asinine, but a “literary hit” in that it was a novel published by Unbound, the crowd-funded publishers, and managed to win one literary prize, make it on to the Booker’s longlist and be one of six novels on the shortlist for the Goldsmiths Prize. This crowd-funded novel managed to shake off the accusations of vanity publishing, it was able to remove the stain of mainstream rejection and was read and enjoyed and praised by numerous members of the “literati”. It succeeded where the publishing industry had expected it to fail. And of course it did, because The Wake is an innovative, intelligent and incredibly bloody exciting novel that is truly a pleasure to read.

In 1066, as is common knowledge, William the Conqueror came to England from Normandy, united the country under his yoke and became its king. He is viewed as the first king of England, he is responsible for the Domesday Book, and he is the one who introduced Latinate flourishes into the language. His war on the English was sanctified by the Pope, and his soldiers bore crosses on their banners. He defeated the former king in Hastings, he rode into the country and it was subjugated beneath him. That is the way the war is commonly seen, but in reality there was resistance, and The Wake is a novel about a fictionalised pocket of this.

Buccmaster is a wealthy man living in a village in the fens of East Anglia. His sons are dragged off by strangers to go and fight the Danish invader Harald Hardrada at the battle of Stamford Bridge, then almost as soon as they return from the English victory, are summoned to go and protect their country from Guillaume le Bâtard in the south. They do not return. Buccmaster, who did not fight, is angered by all this death and refuses to pay the taxes demanded by his new King. As a result of this and similar behaviour by his neighbours, he returns from a day’s eel-hunting to find his house and his village burned to the ground by Frenchman. His wife’s blackened corpse lies amongst the ashes. He retrieves a sword left to him by his Pagan grandfather (a man hated by the village for his non-Christian beliefs), and Buccmaster sets off looking for revenge and justification for his sense of self-importance.

The novel, told from the perspective of Buccmaster, follows him over the course of two years as he finds and loses members of a small guerilla gang and commits sporadic acts of violence against the colonising French. During all this time he believes he is communicating with the gods of Old England, he sees Woden and Frigg and Thunor, he is chastised by their blacksmith, and he pursues a vendetta against “the crist”, the usurper of the worship of the Englishfolk, a foreign god who corrupts and destroys history and identity. The Wake is a gloriously blasphemous novel, with Buccmaster muttering “fucc the crist” many times and seeing any worship that is not for traditional nature gods as worthy of execution. With the loss of his sons, his wife and his land, he slowly unravels, from a psychological position that was not very stable to begin with. He constantly lies, self-mythologises, is jealous of other guerillas who fight more than he does, he wants power and influence and control and is unable to accept that, with the loss of his land and position on the local council, he no longer has any. He is weak and scared, but talks about himself as if brave. He is selfish, but claims to fight for “angland”. He hides, he runs away, he states that all men are weaker and less trustworthy than he is, yet repeatedly demonstrates his weakness and lack of balls. He is a gloriously flawed character, and his anger, self-obsession and self-importance provide a lot of comedy in what is, otherwise, a dark and violent novel.

The Wake is written in a strange approximation of Old English. This is very distracting to begin with, but the reader’s awareness of it soon disappears. Though there are a few recurring words that sound nothing like contemporary English (“holt” for “wood”, “ea” for “river” and “scramasax” for dagger”), these are explained in a glossary at the back, and most alternative spellings are more a phonetic rendering of old pronunciation than anything else. Fifty pages in, the language is unimportant, a hundred pages in, the reader stops noticing it’s even there. One is left with a novel rendered in language that feels time-appropriate, but is readable; one is left able to understand this “shadow tongue” (as Kingsnorth describes it) well enough to read a thrilling and complex adventure written in it.

The Wake feels most like – from all I’ve read – Cormac McCarthy. Whilst McCarthy writes terse novels about lonely men, slightly psychotic, wandering around the wilderness of America a hundred years ago, Kingsnorth has written a terse novel about a lonely man, slightly psychotic, wandering around the collapsed society of England a THOUSAND years ago. The history is much further back, but the terseness of the prose, the evocation of a shattered individual within a shattered society is pleasantly familiar, yet distant enough to not feel like an Anglicised rip-off.

This is a great novel – its form is interesting and its plot is exciting, its characters engaging, and its exploration of old, pre-Christian religions pleasantly like all the weird stuff that happened beyond the wall at the end of Season Four of Game of Thrones. I laughed, I almost cried, I was terrified many times and repulsed and disgusted by the violence, like I would be if reading a McCarthy.

I highly recommend The Wake, it’s an adventure about someone who isn’t adventurous, it’s a historical novel about people who ignored history and didn’t influence it, it’s a novel than seems difficult but isn’t, it’s a novel that was crowd-funded and isn’t just not shit, but is genuinely one of the most original and intriguing texts I’ve read in a while.

To show my support, I’m going to donate to another Unbound project, because if this is anything to go by, it’s doing great, great work.

A brilliant novel. Look it up.

2 comments on “The Wake by Paul Kingsnorth”