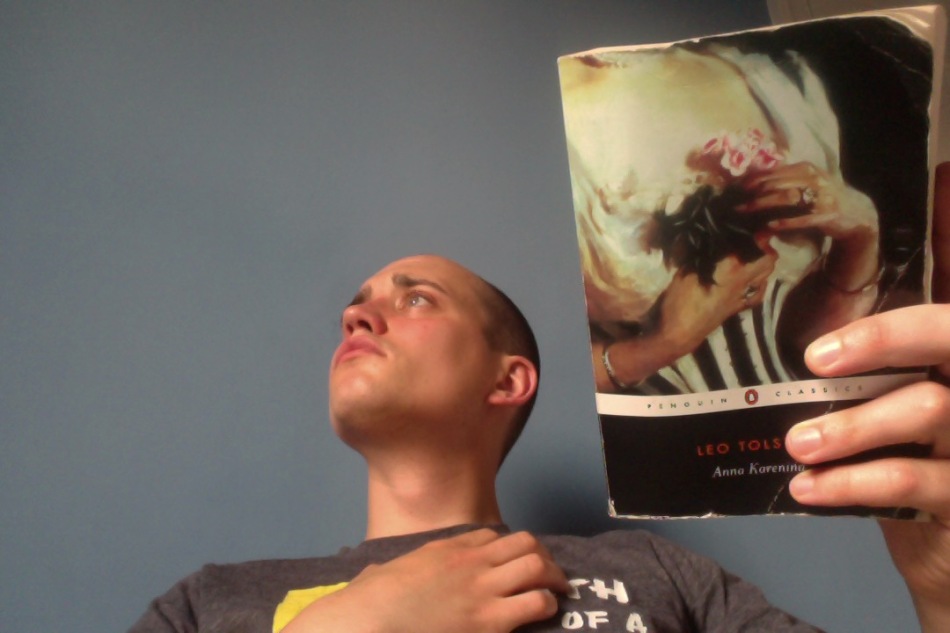 Big books. I have an odd relationship with ’em.

The idea of big books, to be honest, I have a problem with, though usually do enjoy them once I’m in*. I feel a novel should be readable in a single sitting (even if that sitting is 16 hours long), and there is a part of me that baulks whenever I start reading something that I know will take me weeks, rather than days. Anna Karenina, at over 800 pages, took me just under a fortnight** to read. Which is way too long, particularly when one of those weeks I was on holiday, in Russia, and dedicated rather a lot of time to it.

Anna Karenina is not just long, but also rather dense. There are about 20/30 recurring characters, and about 7 or 8 (maybe more) have chapters and narratives of which they are the centre, and it’s thus really rather difficult to dismiss more than a couple of them as peripheral central characters.

As mentioned above, I started reading this in Russia (St Petersburg). The country is still socially conservative and (allegedly) mired by corruption, as is the Russia Tolstoy writes of. The world itself, it is true, is still full of unhappy married couples who seek (and some apparently find) solace elsewhere, but the significant difference between Anna’s world and ours is that it is now possible for people to divorce and still be able to see their children, the unassailable dream that Anna Karenina (spoiler) dies chasing.

It’s a novel of desperation and desire, of regret, and somehow manages to not pass judgement on either Anna and Vronksy or the society that won’t accept their relationship. Tolstoy, who appears, fictionalised, in the novel as Levin, does not castigate love and desire, but neither does he criticise a society that keeps people unhappy. Perhaps that it because his personal interests – clarified by the awful and deeply disappointing final part of the novel (see below) – were not, as he was writing, relationships and love and romance, but spirituality and a rising faith in a traditional, omnipotent, Christian, God.

Tolstoy had a crisis of faith, and famously was a grumpy old man for many decades, spouting on the dangers of all sexuality, and encouraging chastity for all. He hadn’t reached that stage when he was writing AK – of course not, no one who’d renounced/ forgotten all ideas of physical thrill could have written the racily restrained scene where Vronsky and Anna first meet – but he had already “found god”, as it were – and it darkly pollutes the end of this otherwise wonderful novel.

The final part (of 8) is about half the size of all the rest, but other than one very moving chapter given over to the shattered Vronsky, running off to fight in a foreign war because he’d rather not give his mother the additional shame of her son committing a more obvious kind of suicide, it’s all duller than taking a shit. Levin***, who before was a committed, rational, normal grown up who was aware of the emptiness of existence and the pointlessness of religion, starts praying in fear as his wife gives birth. She is delivered of child safely, and afterwards Levin questions the validity of his prayer and realises that as he did so, he was filled with an unfamiliar and deeply soothing feeling. He then finds it in his daily life by regressing from his adult state into that of a self-important believer in religion. And that is all that happens in the last 60 pages of an otherwise brilliant novel. A false epiphany, not meant to be read as a tragic loss of intellect and self-awareness.

I’m being vitriolic about those with faith, an issue I usually try to remain sensitive about.**** Some people do, I know, take religion seriously. But the reason why I’m attacking here is for the absolute reason that, like it now fails to do with Christmas, like it still does with some weddings and like it did when I wanted to go into a cathedral in Vienna six years ago and it was closed for a service – religion has ruined something I would otherwise have enjoyed. And, in particular, to come at the close of a novel that dramatises so clearly the negative effects of an absurd adherence to dogmatic religion (for, what else, is the reason for Russian society’s reaction to Anna deciding her marriage is over and moving in with another man), it is all the more galling. Tolstoy writes desire beautifully, he emphasises the pleasure to be found in mutual attraction with such engagement, he evokes the unrepentant, confused, guilt of adultery, he recreates falling in love, regret, boredom, shame, desire, desire, desire, with such a bodily knowledge that it is so disappointing that he turns from this clear acknowledgement of the animality of the flesh to an exalted, old man-ish love letter to a dead religion.

When Anna throws herself under a train as a punishment to Vronsky for daring to let his interest in her ebb, despite her having made herself a social pariah by leaving her husband for him, the reader feels her flesh be twisted and sliced and smashed apart. When the narrative – fleetingly – returns to the broken Vronsky afterwards, the modernreader can see his pain and feel his anger at the awareness of Anna’s wish to hurt him – their last exchanged words are “this is becoming unbearable”, to which she replies “you will regret that” and regret it he does. But rather than end with this man we care about, this man who has loved with intensity and emotion, Tolstoy moves the text away from this point of interest towards the spiritual climax of dull Levin.

Anna Karenina and Vronsky are great characters, as are Anna’s brother, her husband, Kitty, Dolly – but Levin is dull. He feels dated and aged in a way that the rest of them don’t. He is a classist, sexist, rural traditionalist, and he was meant to be the portrait of Tolstoy. He wasn’t important to me as a reader, but he was an overbearing presence in the end of the book. And it was unforgiveable.

All Part 8 needed for closure was the implicit forthcoming suicide of Vronsky, travelling to someone else’s war with despair in his heart. What it didn’t need was the presence of god. Nothing needs religion. Not weddings, not Viennese cathedrals, not the narrative conclusion of Anna Karenina.

But the ending is self-indulgent, god-bothering shite.

Read it, oh my christ read it if you haven’t, but don’t bother with the ending of Levin. Because no one other than a writer writing about himself would ever think that added anything.

* I firmly believe, for example, that Infinite Jest is the best novel, and that’s HUGE.

** Which is, I believe, how long people normally spend reading a novel. Eurgh. Then you’d only get through 26 a year, which sounds awful. God, imagine only reading 26 novels in a year. I can’t think of anything worse.

*** I’m typing this on my phone, and it just auto-correct that as Kevin. Somehow that name change would have made Anna Karenina a lot funnier.

**** Though any of the few people who’ve read my (unpublished, of course) novel about John the Baptist may disagree.