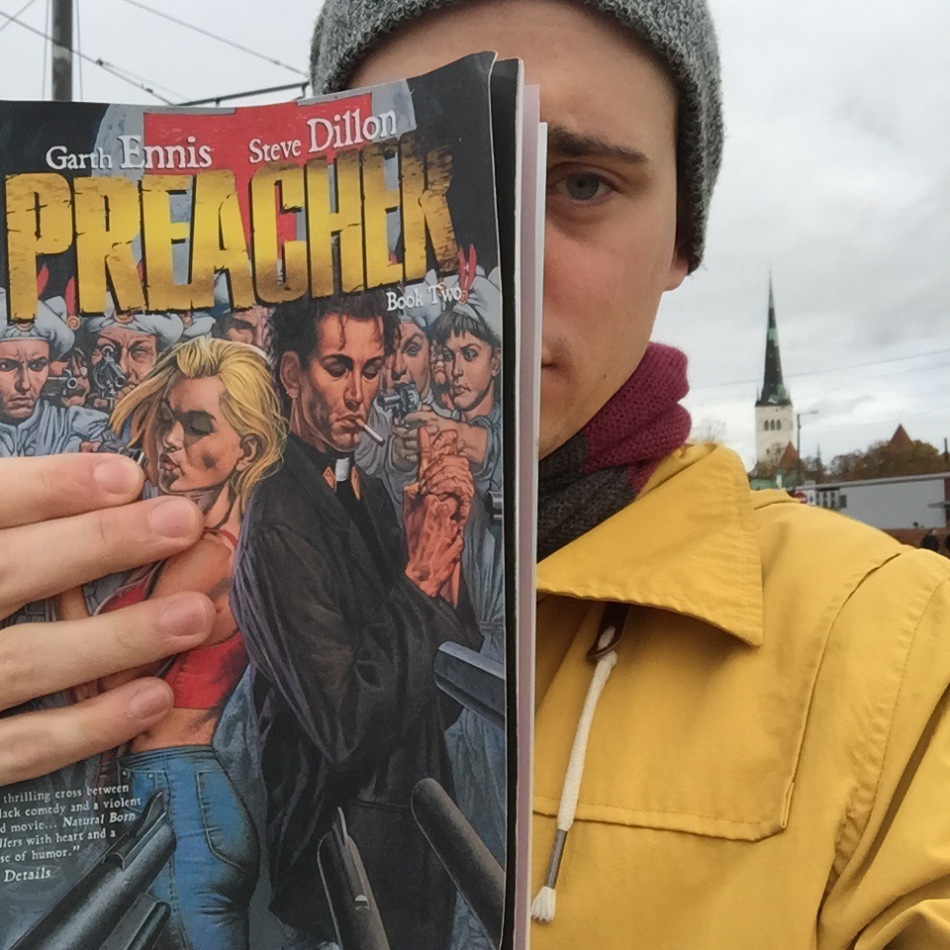 I read the first volume of Preacher about a year ago, and really enjoyed its brash ridiculousness. This second volume takes everything it’s already set up and throws petrol on the flamer. As the series continued, Garth Ennis and Steve Dillon didn’t just turn Preacher up to 11, they also made 10 louder.*

Preacher was a series of comic books that ran for about half a decade from the mid-90s onwards. It tells the story of Reverend Jesse Custer, a badass Texan preacher who is possessed by Genesis, a highly powerful entity born following the sweaty union of a demon and an angel. God, fearing for his throne, has gone on the run, and the massed forces of heaven and earth (not yet hell, but I imagine it’s coming) have been sent to stop Custer before he realises how to control the force inside him and thus becomes more powerful than anything in Creation. Sounds fun, right? It is, it my opinion, but if it doesn’t sound like your kind of thing, you’re not going to like it. It does EXACTLY what it sets out to do.

Custer’s best friend – who was also in Book One – is an Irish vampire, and he is also usually accompanied by a gun-toting, car-jacking girlfriend called Tulip***. Together, they seek God, whilst others seek them. In this volume they encounter numerous new villains – the Grail, an organisation seeking to prepare the world for the Apocalypse; Jesus de Sade, a super-rich, bestialist pan-sexual organising a Californian smack and coke orgy with animals and children on offer; and Herr Starr, the former second-in-command of the Grail who has very different – and Jesse Custer-centred – plans for the end of the world. As well as this, all the previous not-dead enemies of Custer return too, some of whom – in classic comic book style – he forms alliances with in order to defeat an enemy bigger than them both.

Preacher: Book Two is a violent, blasphemous assault against the godly. We have angels taking drugs and discussing their love of sex, we have mass murder justified by faith, we have the inbred descendants of a con-man – yet divine – Jesus, we have God himself as a scared loser advocating torture and being weak. It’s outrageous, and within the first few pages I was giggling inappropriately on the Helsinki-Tallinn ferry, mumbling “They can’t do that!” while my girlfriend**** kept telling me to stop reading a book containing so many rude pictures in a room full of children.

I don’t know how strong an understanding of Catholic dogma you’d need to enjoy Preacher, but I don’t think it’s much. Obviously (for those of you who don’t know) I wrote a highly sexualised novel about John the Baptist – WHICH COULD BE ADAPTED INTO A GREAT COMIC BOOK IF ANYONE IS INTERESTED IN COLLABORATION – so I’m about as bibled-up as it’s possible to be whilst remaining sane, but I don’t think that’s been essential to my enjoyment of Preacher. Maybe it has been, though, maybe it is exactly because I’ve enjoyed being as base and physical and violent and racy with Christian figures as Ennis and Dillon are here, that Preacher appeals to me so much.

For me, though, Preacher is great. It’s funny, it’s exciting, and in two unexpected and somewhat-fillery chapters in Book Two, it contains some surprisingly nuanced historical fiction about both the Vietnam War and the Easter Rising in Dublin. These are asides from the action, but this is where the real humanity in the book lies. Ennis and Dillon have the ability to tell mature and informed stories about real life, but instead choose to write balls to the wall flat out religio-fantasy adventure.

So, that’s the conclusion: Preacher is a cock-load of fun, but it’s frothy. And I’m (for one more day) on holiday, so WHY THE FUCK NOT???

* Preacher is a cult comic book, and as such I anticipate that traffic for this post will be far higher than for my usual articles about books no one else is reading. (This is an observation based on statistics – comics and poetry are the genres that get the most hits on this website from people I do not know. As a result of this, whenever I DO blog about either of these topics I try to emphasise both a) my qualifications to make judgements on the subject (i.e. poetry: I’m a literary snob with two English degrees who doesn’t deal with society well; comic books: I’m a nerdy male who knows a lot about lame pop culture (i.e. rock music – look for the forthcoming bit about Use Your Illusion I**) who doesn’t deal with society well; and in addition, when I write about wanky, depressive novels written by people who killed themselves I try to make it very plain that I’m a depressed alcoholic with thwarted literary ambitions who, of course, doesn’t deal with society well) and b) offer a balanced – i.e. non-gushing – opinion in order to get snarky responses from adherents/writers. See, for example, how angry Pascale Petit got when I made a minor critique about her otherwise stellar collection of poetry, What The Water Gave Me. Hence the Spinal Tap reference. Comic book geeks are gonna cream into their already come-stained Batman Y-fronts over that opening. Wait, is that offensive? I COURT REACTION, HAVEN’T YOU GOT THAT YET???

** In the end I didn’t get round to mentioning this. I was going to write about how, a couple of days ago, I did a three hour drive through Finland and the only thing I had to listen to was a CD copy of Use Your Illusion I that I bought in a service station. It’s a very mixed rock album I had and loved as a teenager and the adult me got a lot of pleasure out of driving through the countryside whilst listening to the tracks I enjoyed when young, yet I also experienced a lot of confusion listening to all the crap on the album (almost half of it), not really understanding why it was put out by Guns N’ Roses in the first place. The songs I liked, though, were still great.

*** Who Custer actually ditches before the very violent denouement of this book in order to “protect her”, something which I really hope Ennis and Dillon make reparations for in the next volume. The comic’s strong female character was absent for way too many chapters here, and all the villains were men. Preacher ain’t passin’ no Bechdel test here, but there are four more books. There’s time.

**** Is it an error to allude to the fact that I have a girlfriend in a blog post about a comic book? Does this immediately set me up as someone not able to comment upon the genre? To continue stereotyping, the flip side might be that all these woman-hating, superhero-loving men (like Elliot Rodger and Christopher Harper-Mercer, men who go on mass killing sprees, men that I read about this week in both Notes on Suicide (blog here) and in an essay in the LRB about killer manifestos (link here)) might hold me up as some kind of paragon: the comic book reader in a relationship. For clarity, though, I’d like to state here that I never read a single comic book BEFORE getting a girlfriend, and that this recent literary journey I have been indulging in is in absolute contrast to the wills of my partner. I am able to do it and still have self-respect because I also read Proust and Woolf, yeah? And, also, because I’ve given up on life and can’t be arsed to care what people think. I wouldn’t recommend anyone of intellect spends time reading Preacher until they’ve already read Infinite Jest (the best novel – fact), Mrs Dalloway, The Sea, The Sea, Wuthering Heights, Americanah, anything good and weighty, and with women in, you know? I mean, Preacher is great and Preacher is fun, but it’s froth, right? I want you all to know that I know that. I’m under no illusions. From Hell and Watchmen, if you want to read comic books, are intellectually engaging and truly literary. Add those to the above list. But don’t waste time reading Preacher until you’ve got a good grasp of literature and read more than one book by a woman, and at least ten that don’t include drawn pictures of tits. There is not enough time to read every book: don’t read things that won’t expand your understanding of humanity until you’ve read enough ART.