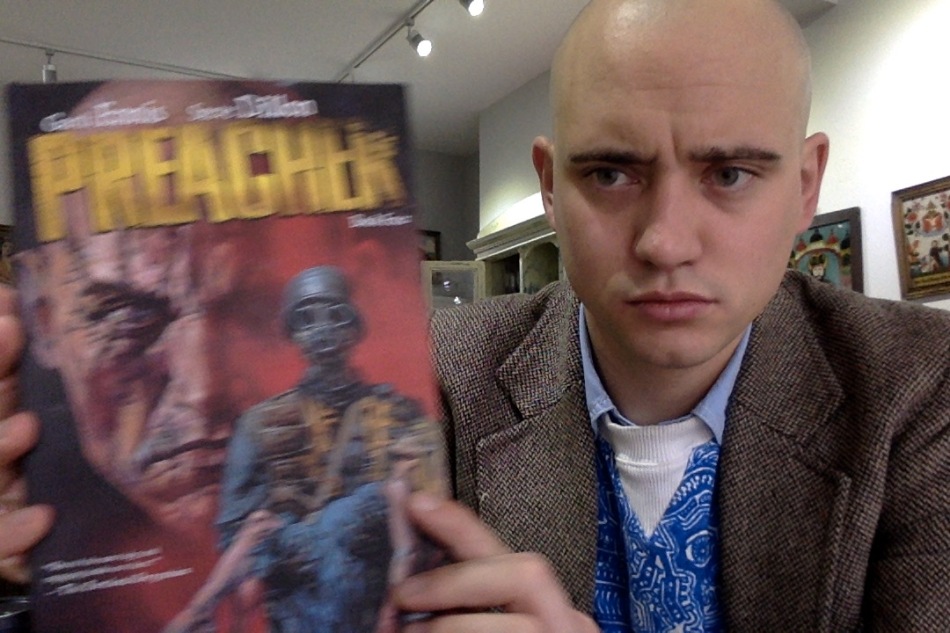 So, I’ve read another volume of Proust and, like the traditional neat gin, cheese straight from the packet and the tear-lubed wank everyone has after a long but satisfying workday (right?), I’m following Sodom and Gomorrah with something even more depraved, even funnier, but much, much easier to enjoy: Book Four of Garth Ennis and Steve Dillon’s riotous 90s comic book, Preacher.

In sad news, Steve Dillon, the artist from the series, died last week, which was another reason for me to read this text right here///right now. For Preacher: Book Four is a very entertaining read, and this time I left enough of a gap between reading volumes of it to truly appreciate a return to the hilarious, violent, wholly corrupt world of Jesse Custer, Tulip and Cassidy as they battle against Herr Starr and his secretive organisation’s plans to almost destroy the world then grab power in the mess. Starr’s plan is to elevate the demon/angel-hybrid-possessed Jesse (the Preacher of the title) to the status of Messiah, then use him as a puppet to bring about an ordered future where he is an international, spiritually protected, dictator.

This volume collates (I think) eight issues of the comic, plus three long form specials. One of these is great, two of these are fine but underwhelming, but the main plot here is as high tension and absurd as the series was waaaay back in Preacher: Book Two. It’s a great collection of ridiculousness, as the villain Herr Starr tries to lure all the heroes (plus their loosely allied “friend” The Saint of Killers) to an obscure spot in the Mojave Desert so he can kill them. I won’t give too much away, but Starr fails, is maimed (again), and the heroes are dispersed. That’s the main plot, and it’s exciting and well-paced and does everything it’s meant to.

Of the rest, there’s a special exploring the backstory of Herr Starr, set in Cold War era Germany and full of smug violence and kinky sex: great fun. The other two specials – which are at the end of the book and essentially leave the reader with 100 disappointing pages to conclude with – explore Custer’s family in the days before they died (in a gently entertaining pastiche of 80s action movies), whilst the other explores the life of Arseface, a minor character who keeps recurring in the series in a – to me – frustrating way. Ennis and Dillon clearly thought that a man disfigured by a shotgun blast so his face looks like an arse was INCREDIBLY funny, and four books into this collection I still haven’t gotten the joke. I’m presuming Arseface – who has said more than once that he wishes to kill Custer – will return with some narrative significance later on, but when the Saint of Killers (an immortal cowboy who took on the role of Angel of Death as part of a sinister deal with God) and Herr Starr (who can command battalions of any nation’s army at will due to his connections) fail to kill Custer repeatedly it seems unlikely that Arseface will have better luck. As long as he doesn’t have any more 50 page adventures in the final two volumes of the comic I won’t whinge about him again.

It’s much harder trying to blog about something simple in comparison to something complicated, regardless of how enjoyable the text is. Preacher isn’t so much a guilty pleasure as a simple one, like eating toast or wearing a warm jumper. It’s fun, it’s frothy and stylish, but it doesn’t fundamentally alter the way I think about either literature as a form or life itself. It doesn’t push boundaries (especially not four books in – it was so shocking early on it’s difficult by this point to scandalise a reader), and many comics’ve been published since with sex and/or violence as graphic, if not more so, so Preacher doesn’t even have that to brag about. It’s good for what it is, y’know, it is successfully doing what it sets out to do, which is to be fun, frothy and stylish. Boxes ticked. But there isn’t anything for me to grab onto and respond to. ‘Ooh’, I could write, ‘I liked the  bit where the man’s head was twisted off, where the gorilla was killed, where the Saint of Killers said “Not enough gun”, the joke about penis size, the bit where Cassidy finally crossed the moral line he’s been toying with for many chapters,’ but all this is irrelevant to life, all this is irrelevant to me.

Preacher made me laugh. But it didn’t make me think and it didn’t make me cry or emote. Is it right, is it justifiable, to bury ones head in the sand? I convinced myself this morning, on the way to work, that I should adopt a Syrian child refugee. But as soon as I spoke to my partner (whose consent I’d need were I to bring an adopted, traumatised, child into the house) my words faltered before I’d even spoken them: “How would you feel about” ellipsised and instead of “adopting a Syrian war orphan?” out came “a cup of coffee?”

My motivations would be selfish, I reasoned, I’d just be adopting a child as an excuse, as a focus, as a way to draw my own attention away from myself. I’d be giving myself a reason to be healthier, to get up in the morning, to stay sober at night, to get dressed, to bother shaving, to do the laundry, to tidy up the kitchen, to actually get a job that pays me and be more of a grown up.

BUT these children need help, and they’re being victimised by the nasty right wing press that controls the thoughts of the ignorant, hateful, majority of the country I now live in. These children need homes, want safety, want warmth and tolerance and someone to look after them, and I could do that, couldn’t I? I couldn’t help thousands of them, but I could help one, and if thousands of people like me helped out, these children wouldn’t be in care, wouldn’t be in anonymous institutions, wouldn’t be shifted around the country through administrative whims, they wouldn’t be sneered at and hated on, they’d be helped and fed and clothed and offered emotional support on a deeply personal level.

How could I go on through life as a psychological fuck up if I had someone who needed me to be together? And how could I consider myself a psychological fuck up if I spent most of my time with a fucking CHILD who’d seen war, who’d lost his or her family and friends and home and school and town and fucking country to atrocities wreaked by terrible people? How can I compare myself with a child who’s lived inside a war zone? This is millennial behaviour, my me me me generation.

“Why do you wake screaming in the night?” the child would ask me, “Do you dream of bombs and fire and bloodshed too?”

“Similar,” I’d reply, “I keep having flashbacks of my botched Oxford interview”.

“Why do you drink so much, what are you trying to forget?” he/she asks.

“I’d always wanted to be a writer.”

“That remains an achievable aim, you’re only 28.”

“All of my brothers and sisters and my parents and my uncles and aunts and grandparents died when a group of insurgents fire-bombed my house because they thought my father was working for their enemy. I watched my brother burn to death and my grandmother be shot in the stomach. I felt dust and smoke fill my lungs as our home collapsed and it was only through luck that I wasn’t crushed, burnt or shot, and I looked, in the morning, at my murdered family and my decimated home and I wanted to be dead, too, because I didn’t want to be alive and alone. Why do you wish you were dead?”

“Because life is dull when you’re not a rock star novelist and that’s what I’d wanted to be.”

You know? That isn’t real.

In the world we’re in now, burying ones head in the sand isn’t right or defensible. People are dying because of our country’s collective, racially motivated, apathy. We may be an island, but the rest of the world IS STILL THERE. The world is falling apart, gearing up for ever more violence, ever more hate, ever more destruction and even more barriers between nations. We should be moving together, becoming one world, one planet, innit, because turning inwards is dying, is rotting. Hiding from problems – which I’ve done my entire adult life – isn’t the same as fixing them, and the more you ignore a problem, the harder it is to get round to fixing. And the harder something is, the more likely you are to postpone the fixing further, until it gets so fucking hard that the idea of trying to fix it becomes so overwhelmingly fucking impossible that you just walk away from it, bang more negronis, eat more cheese and cycle to work just that little bit more recklessly because, y’know, the adrenaline feels good and I wouldn’t have a funeral like Princess Diana’s if I died, so I don’t matter.

I don’t know where I’m going with this, because we all know that I’m not going to start arranging the adoption of a Syrian child refugee when I hit “post”, and nor is anyone who’s reading this or more than, like, 15 or 20 people across the whole of the country, barely more than 10 times that across Europe. People don’t give a fuck about other people, about strangers, and this is getting more, not less, so. People are LESS tolerant, are LESS open-minded, less helpful, less hopeful and less giving.

And you know what, doing something good for someone else probably would make me feel better, but I know that I’d then end up falling into a nasty, cyclical pit where I – instead of becoming happier knowing I was living a more fulfilling life – would instead question why I didn’t do something more fulfilling earlier, and I’d hate myself for my wilderness years (28 and counting), I’d hate myself for caring about not having been successful and I’d hate myself for having cared about having been such a fucking loser for so fucking long. It doesn’t matter that I’m a loser. So why don’t I grow up and make someone’s life better?

I should – as should you, probably – adopt a Syrian refugee. I should give them a home and food and attention and access to my cute dog and spend a couple of weeks finding them a school and making sure, over the course of years, that they can live a happy life not feeling scared or nervous or depressed. And maybe through that, I’d learn not to feel scared, nervous and depressed myself.

I should get the fuck over myself and adopt a Syrian child refugee, but I’m not going to, and neither are you. We’re all just going to sit here in Brexit Britain or Le Pen France or Trumpmerica or where fucking ever and let the hopeful, international, world crumble to dust around us, as we stare at pictures of ourselves on the internet and watch empty, unreal, bullshit like Game of Thrones and read books that help us pretend that real life isn’t important, empty books like Preacher.

If I’m going to read books like Preacher, I may as well start drinking at breakfast.

The time has passed for doing nothing. But doing nothing but stare, sad-eyed, at my own ever-expanding stomach is all I’m going to do. 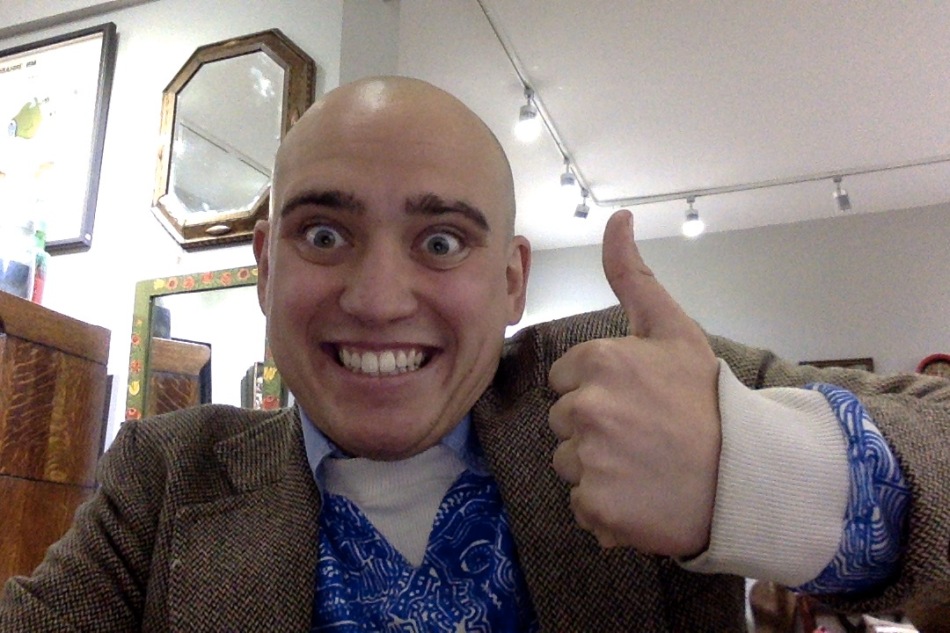