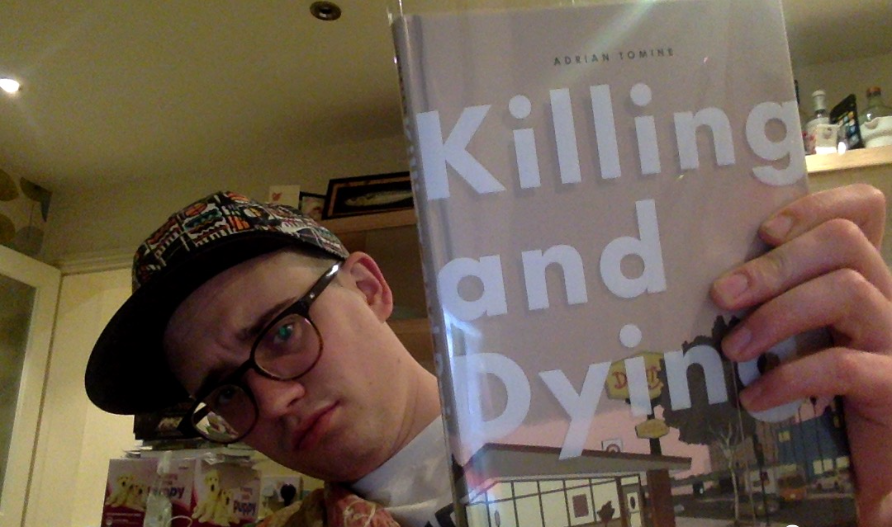 I thought I’d go with something a little different, a little rounder, wider, more fictional and less harrowing. So, from my teetering collection of unread books, I pulled out Killing and Dying by Adrian Tomine. This was a  good shout, for within this collection of six short stories produced in the comic/graphic novel form, there is great emotional weight and a real evocation of deep and relevant humanity.

Adrian Tomine is a cartoonist/graphic novelist whose works have been featured in all those literary American magazines of the type we don’t have here (in the mainstream). Tomine’s breakthrough was in 2007 with the graphic novel Shortcomings, which I’d heard of previously, while Killing and Dying is more recent, a 2015 collection of new short stories, published in the UK by literary stalwarts Faber & Faber. And this is definitely literature: it is evocative and emotional and horrendously moving in places, the six stories varying in tone and content but never in their quickly created depth. Every character is rounded, every character is human, every character has something happen to them that is believable within the real world: these are comics that aren’t genred.

The first story, ‘A Brief History of the Art Form Known as “Hortiscuplture”‘ is presented as a series of four and 12 block episodes, and covers the majority of a decade in the life of a middle aged gardener and his family. The narrative is about a destructive obsession, but also about the artistic impulse. The gardener invents a new self-described “art form”, which is basically giant, ugly plant pots. The story follows his many attempts to publicise and normalise his idea, with his business and his marriage and his relationship with his daughter gradually becoming corrupted by this misguided pursuit. It ends happily, though, with everything coming nicely together again. What is most interesting about this is the fact that the lead character is smoking throughout, in almost every frame. I don’t think I’ve encountered a character that smokes above the age of 50 and doesn’t get cancer in literature for years.

From then on, though, the collection really picks up. The third story, ‘Go Owls’, is about the dysfunctional relationship between a 42 year old petty drug dealer and a woman about half his age. They meet at an AA meeting, an organisation both are pretty cynical about. They date, fuck, “fall in love”, begin to cohabit and years gradually pass. Their alcohol and drug use gently creeps, their arguments become more bitter and the man gradually becomes violent. This is an unpleasant story in that it charts, without any distraction or avoidance, the shift from emotional to physical abuse, without containing a moral judgement about one or the other being intrinsically “worse”. This one is all in black and white (I mean the drawing, literally), and it explores sexuality, ideas of the self and ideas of what success and happiness mean to an individual. Wide characterisation, in depth exploration of a fictional couple. Works very well.

Next follows ‘Translated, from the Japanese’, which is a short piece containing very few images, all of which are large and beautiful. Detailed cityscapes, buildings, vehicles and objects. Over the top of which is laid a second person narrative about a woman returning to America after years in Japan, bringing her daughter back to its father. It is touching, but particularly important here is the artwork.

The titular story, ‘Killing and Dying’, is one of the most poignant and heart-breaking stories I have read in a long time. It had me bawling as I walked, reading, along Upper Street*, because it is wonderfully human and wonderfully sad. ‘Killing and Dying’ is about a stuttering teenager who decides she wants to become a stand up comedian, and after heavy encouragement from her mother she enrols on a course for teenage stand ups. Her mother, however, is slowly dying, and after the showcase at the end of the course, she is gone. Her daughter feels compelled to pursue this dream her mother wanted for her, and begins performing, badly, on the local circuit. The reader feels this will stick with her for years, her grief twisting into a sense of being beholden to a dream she cannot satisfactorily imbue. It is very sad, as are all good texts about loss.

The final piece, ‘Intruders’, is about a man back in his hometown between military tours, living alone in a bedsit. Someone who once housesat for him, many years ago, bumps into him and gives him the keys for an apartment he once shared with a wife. She is no longer there or in contact with him, but whether that is due to death or divorce is not stated, and it doesn’t need to be. This is a subtle novel about loneliness and unhappiness, about a man who spends a few idle weeks sitting, uninvited, in the apartment where he was his happiest. It is about the pursuit of peace and a focus of nostalgia being opposed actions.

Tomane’s writing is terse but expressive, likewise his drawings (other than in ‘Translated, from the Japanese’) are sparse, too. Important details are there, but it is the faces and the bodies and the words and actions of people that matter less than the places they inhabit. These are comics that are truly for adults. Not because they’re sexually explicit or include rude words, but because they are intellectually mature and deeply literary. These are beautiful, gentle, stories, told with a real knack for narrative art. ‘Killing and Dying’ upset me quite deeply, and I cried again when I described the plot to a friend (not my dog) later in the day.

I would highly recommend this collection. I will also be looking into Drawn and Quarterly, the Quebecois publishing house that first backed Tomine’s writing. Their entire output is meant to be things like this, genuinely literary comics. WOOF!

A very good find. It featured in a display at Orbital Comics in Covent Garden, a shop that is basically Forbidden Planet for grown-ups. I.e. it isn’t full of toys.

* I spend a lot of time crying on Upper Street, whether I’m reading or not. Maybe it’s because I’ve always been so detached from pornography.