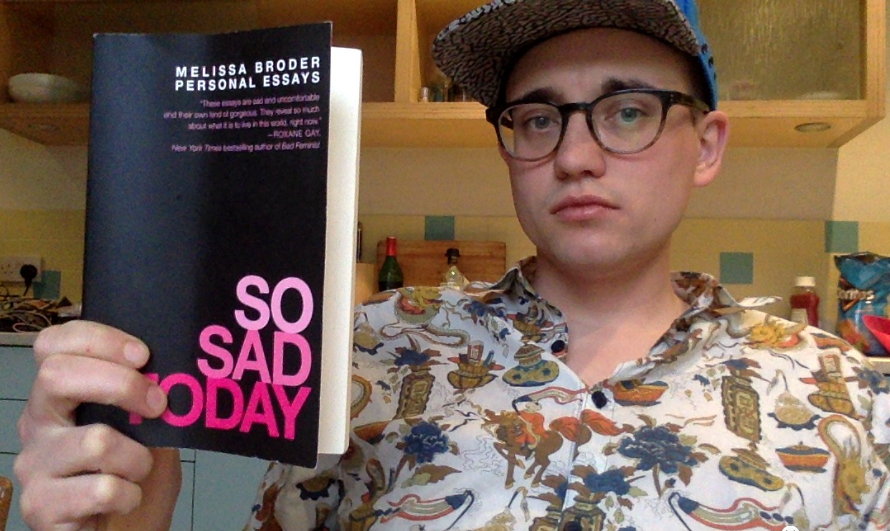 I shouldn’t have read this.

CONTEXT: I walk a tightrope, emotionally, one that has become longer and looser ever since I replaced all normal treatment for my ever-present depression with severe alcoholism and working too much. I reached the point several months ago where I knew I needed to drastically alter my circumstances, esp re the drinking, but still I’ve ploughed on, putting off and putting off the movement forward, attempting to arrange and find further distractions. I took up swimming (again), but the rhythm of that has fallen apart like all my other health drives. I had two Russian lessons, but then gave up. I tried to get into sober socialising, but after two sober playdates with my dog and friends I had to drive to see, I realised I preferred drinking alone, and by the time I was driving home at 10pm the overwhelming NEED for alcohol made it all but impossible to make conversation. The alcohol dependency is in the way of a lot of things, but the addiction didn’t cause itself, external factors and an avoidance of dealing with them are what have led me to the point where I now haven’t gone to sleep sober more than three or four times this calendar year.* In many ways, though, it’s working. Filling all the time I’m not at work with drunkenness and hungoveredness means there is never time to do anything that opens up my self-criticism.

Give up writing, that way you don’t have to feel bad about getting rejected! Don’t try to hang out with friends, because then you don’t have to be anxious about saying the wrong thing or offending them. Don’t speak about anything to anyone ever and you can pretend you’re ok. Repress absolutely every emotion until you’re in a position where you can’t and just have a massive monthly panic attack to relieve stress. Also cry, cry, cry, cry, cry, cry as much as possible, because catharsis gives the opportunity to vent. But don’t engage. Don’t talk openly or honestly with anyone, ever, because no one wants to hear about you, remember how bored all the therapists got by the end? There is nothing than can heal, but there is something that can salve: beautiful, beautiful double negronis.

I’m digressing, though not really, because the book I have just read has torn a layer of skin from my inner eye. Wait, I can improve the metaphor: So Sad Today has replaced my shattered internal glasses, it has lasered good my internal cornea, it has peeled off a cataract, it has-

The book I’ve just read has drawn attention to things about myself I’ve been down-playing, though I’m sure my outer demeanour (and all those panic attacks!) have been making it very obvious to external observers.

Melissa Broder is a poet and (until recently anonymous) Twitter celebrity (yes, that’s a thing) known as @sosadtoday. Her tweets are all about depression and anxiety and her follower count continued to grow and grow, until, after a few pieces commissioned by trendy, Twitterish, magazines, she got a book deal. So Sad Today: Personal Essays is a shortish book containing eighteen essays on various topics about life in the modern world. It’s all internetty and addictiony and sexuality-ish, but it’s also incredibly open and revealing and deeply, deeply moving.

Broder writes with a firm understanding of her own issues, from a comfortable position of resigned discomfort. Her anxiety and her depression are long-standing, are personally eternal, and throughout her life (she is, by my reckoning, mid-30s now (this is a brand new book)) she has tried various methods to stave off the darkness. Drugs, alcohol, yoga, spirituality, sex, love, etc… She also had/has a solid career day job, and is still a relatively successful poet.

Success doesn’t fix depression. This is a conclusion I keep arriving at and it’s having a detrimental effect on my ability to self-motivate. The other crushing blow from So Sad Today is that sobriety doesn’t necessarily work – Broder is almost a decade sober, but she still has panic attacks and is deeply unhappy. This also stokes my fear that there is nothing to be gained from self-improvement.

Broder’s essays on anxiety and depression are the most profound and familiar I have ever read. She understands how it feels, and expresses it far better than I ever could, and I think in part that is cultural: Broder is far freer in herself than I am. This is particularly noticeable as regards sexuality, a recurring topic in this book that – every time it was introduced – had me utterly perplexed and confused.

I cannot relate at all to the way Broder talks about sex, which is as if it’s something calm and relaxing. Perhaps I have a puritanical streak, and so does Broder in her sobriety; but although she denies herself literal intoxication, she instead indulges in the whole gamut of intoxication in others: romantically, sexually, platonically etc.. Broder has an open marriage for a while, Broder has flings, hook-ups, writes about “sexting”, sending “nudes”, she talks about falling in love-like obsession over and over again, about trying to deny herself lovers she feels are bad for her but being unable to resist… She throws herself into bodily and sociological experiences and this, I suppose, even this, doesn’t make her happy. But nor does it make her less happy, which is the part I can’t understand. I feel guilty if someone tries to flirt with me, and I broadly consider any moment of sexual attraction a bad thing to feel, even if it’s for my partner. I struggle to understand the way to correlate male heterosexuality with socially liberal attitudes.

I think this is a cultural problem not unique to me: I’ve never been presented with or witnessed a way to articulate male heterosexuality outside of the patriarchal norm, and as that method of sexual expression repulses me, I’ve become trapped without a sexual identity. I’ve never watched pornography and in many ways I feel that makes me a sexual naif, despite my age. I feel that I lack the expected understanding of sex: I’ve never watched (and watched is the key word here) people having sex (discounting mirrors). Obviously, I’ve seen contemporary television and cinema and thus have watched people pretend to have sex thousands of times, but that is a different kind of filmed sexuality and for a different purpose. I know I’m not expected to get my cock out and start pummelling myself off whilst watching Game of Thrones with the in-laws, but as I’ve never watched a video which I am meant to wank to, I don’t understand how one would feel that was normal. I don’t want to watch pornography, I don’t want to chat with other men about women as if they’re objects, I don’t want to think of sex as a transaction, I don’t want to make jokes about strangers’ bodies, I don’t want to rape anyone, I don’t think I have a right to sex due to having the desire for it and I don’t think fucking as many people as is humanly possible would make me happy. So what am I meant to do? I’ve never heard another hetero man express his sexuality in these terms before, I’ve never heard another hetero man express his sexuality in any terms other than those that can be summed up by the syllable “Whey!” and a gesture where one hand is put on the forearm of the other. Like this image, I’ve never heard another heterosexual male express his sexuality in terms other than this:

Even some of the most liberal men I know occasionally slip into objectification of a stranger, and those that don’t allow themselves blokeish chat about women tend to not speak about sex or desire at all, at least not in a first person “I felt this and I did this” kind of way. I struggle to comprehend a method of discussing sexuality where the bodies of others remain fully and firmly attached to the personalities therein contained: a sexuality of mind, a sexuality of thought, a sexuality of, I worry, bullshit. Can it be done? Probably, because I think Broder kind of achieves it.

All of the sexual partners she refers to – some only in a sentence – have a personality. I think this is her poetic background, the ability to imbue character with only a handful of words. The man she falls in kinda love with (“catches some feels”) whilst in her open marriage is a recurring character here, and he is present. Her husband, too – though distant until the penultimate and most moving of all the essays – is alive, as are all the men and women she fucks, fools around with, kisses, dates, etc.. Border finds individuals attractive, not types of individual. Even when it is the idea of a individual that she’s attracted to, it is a unique experiential relationship, and when the relationship fails due to her fantasy’s distance from reality she doesn’t blame herself or the individual, she blames the fantasy. She doesn’t project guilt out of sexual desire, which as someone who identifies as culturally Catholic is a very alien concept to imagine.

Border can be hilarious (‘Help Me Not Be A Human Being’: an essay listing 100(ish) types of love story), she can be shocking (all the detail about her vomit fetish), she can be postmodern (‘Google Hangout With My Higher Self’) and she can be heartbreaking (‘I Told You Not to Get the Knish: Thoughts on Open Marriage and Illness‘, all about her husband’s debilitating progressive disease and the mixed joys of polygamy**). Broder made me laugh and cry repeatedly, because she is always deeply and touchingly human.

She made me feel great feelings, she reminded me of all the weighty feelings I keep trying to deny and she reminded me why I still hold literature as the most important and most transcendental art form there is.

What is love? What is fear? What is friendship? What is sex? What is the internet? What is depression? What are other people?

Broder is an engaging and intelligent writer and her work deserves to be read by people other than those scenesters on the Twitter. I will be lending this out.

* I’m kinda exaggerating for effect, but not by enough to relax.

** I’m probably using that word wrong, but as I said I’ve never even watched pornography,  I don’t know about sex terms. [Insert: “I thought the Kama Sutra was a curry!” gag, unless that’s racist in which case cut it out, but I don’t think it is because the joke is about my ignorance. If I’m wrong, please tell me in the comments.]

0 comments on “So Sad Today: Personal Essays by Melissa Broder”