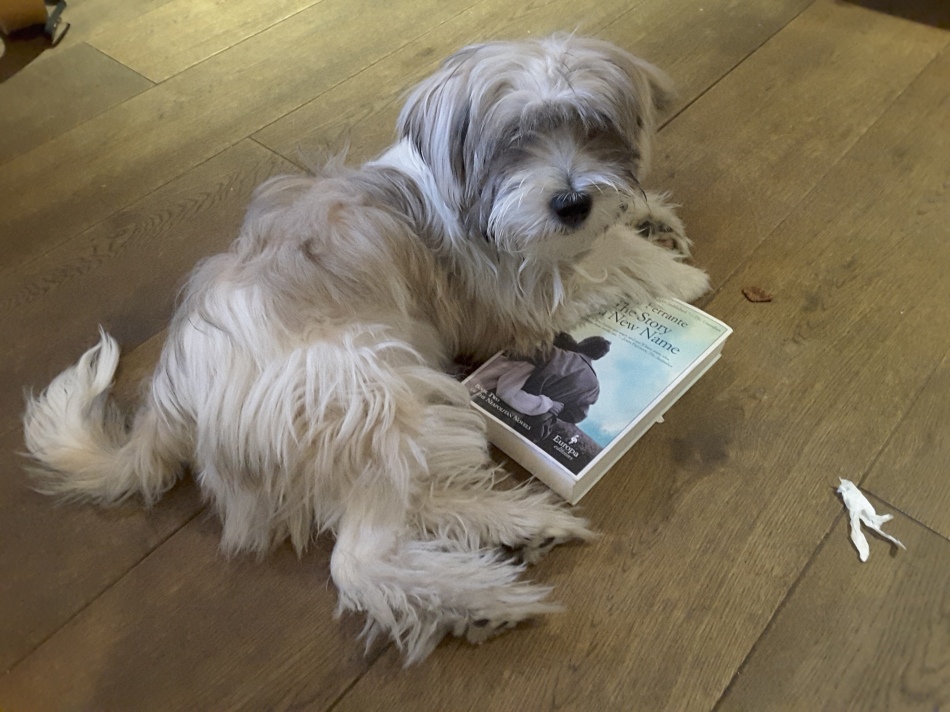 When I read the first volume of Elena Ferrante’s lauded Neapolitan Novels series, many of the conversations being had about it – by others as well as me – relied on comparisons with Europe’s other contemporary literary autobiographical epic, Karl Ove Knausgaard’s Min Kamp. Back then, a couple of years younger and still optimistic of a bright, literary, future in my own life, I felt moved to defend my fellow Northern European straight white male against this Southern threat, praising Knausgaard’s ability to capture exactly a life broadly similar in tone to my own. Ferrante’s first volume, My Brilliant Friend, is all about girls* hanging out in semi-poverty in Naples in the 1950s/1960s. In The Story of a New Name, Elena and Lila have become young women, one who is pursuing school and academia with great energy, the other who has abandoned her plan to escape her childhood neighbourhood and is instead married to the local, successful, greengrocer. The first book ended with Lila’s very young marriage, aggressively signalling the end of both the protagonists’ childhoods, and this volume begins with them separated, no longer competing as peers in the classroom, but instead seeking happiness in different ways, with both of them experiencing pain, loss, and the rare good moments one sometimes finds in life. Both the young women are growing out of childhood and becoming adults that neither expected themselves to be.

I have sat today and read about 250 pages of The Story of a New Name, in part because I’ve been distracted by so many things recently I haven’t finished a book for two and a half weeks, but also because when I picked the book up this morning with a few (rare, atm) hours to myself, I fell through its pages and into a different world. I read the first half of the book in snatched moments as I ran around the city doing chores (in preparation for the beginning of a new act in my life**) and I spent far too much of that time flicking back to the list of characters at the front, trying to relearn all the complex familial and romantic relationships Ferrante’s series of novels contains. Today, though, a great day of semi-intense reading, has been a joy: a couple of multi-hour book-banging sessions, sat in a reasonably comfortable chair with access to a functioning Nespresso machine and my dog. It’s the kind of happiness I never dreamed could exist. As long as I avoid mirrors, there are ways to fake contentment.

Elena Ferrante’s novel is about the very trackable rise of the first person narrator, Elena, as she goes from poor schoolgirl to published, young, novelist, whilst Lila – always considered superior when they were children – loses herself in a bad marriage, finding glimpses of love and happiness in an affair and in a professional life that her controlling husband also poisons for her. These novels are about female friendship, and Elena and Lila return to each other, are drawn to each other, over and over again, as the formative experiences of their childhood colour and pollute the adult lives they lead. Fantasies are exposed, ideas of success are challenged, the move from poverty to affluence is explored and the hypocrisies and false promises of materiality are exposed. What can provide happiness to a life, what is its centre? A true understanding of the self and its needs, appears to be Ferrante’s conclusion, and it is a truth hard won by her two protagonists, one of whom the reader is implicitly – though never directly – meant to presume is the novelist.

The text is, as one would expect, detailed, and gloriously so. We get buildings and cutlery and foods and drinks and bodies and geography and rooms and houses, we get the sea, described a thousand times but always different, we get the night sky stared at and studied in romantic teenage moments, we get sex written about frankly and with both excitement and revulsion depending on context, we get the related awakening of adult sexuality and the understanding of the value of adult cross-gender relationships that are not rooted in desire. The main friendship, of course, is the one between the heroines (sorry, that’s a reductive word), but their myriad other friendships are also important, the way their worlds expand (or in Lila’s case contract) serves to show their development. And while Elena meets the literati and befriends academics and intellectuals, Lila forms stronger bonds with fewer people. Both women are more independent by the end of this volume, and Lila has found a form of unexpected emotional stability despite losing all the wealth she begins the book with. She retains her dignity, despite having lost most of her friends and family: there is an overwhelmingly emotional reunion scene in a sausage factory where the two women, each happier than she has been before, confront the adult self of the other and find a connection, but a new one.

In fact, there are tens of overwhelmingly emotional scenes. The first time Lila falls in love it is heartbreaking, the violent response of her husband as inevitable as the murder of Osha in this week’s Game of Thrones; when Elena is assisted into applying for a scholarship to university, when she exceeds the expectations of her teachers, when she exceeds the understanding of her parents’ concept of success; when she gives the draft of her novel to her boyfriend and he leaves it on a restaurant table, when she realises with hindsight how unglamorous the loss of her virginity was, when she understands how important her friendship to Lila is and always will be; this book is a series of hugely affecting set pieces, lots of short chapters that all move a life and a story forwards.

Understanding where one comes from and embracing it, but not being overwhelmed by it, enjoying life and understanding who and how one approaches it… The lessons Lila and Elena learn here, in their youth, are important ones, and ones I still struggle with, half a decade older than they are by the end of this book. Ferrante understands humanity and extremes of emotion, and though there is far more normalised and accepted violence than is recognisable up here in the cold, cold, North of Europe, her 1960s Naples is every bit as real as Proust’s France and Knausgaard’s Norway. The anger and aggression that runs at a higher pace, the repeated marital rape and marital abuse is painful to read, but becomes less painful through its repetition, which is in itself painful. Men in Naples in the 1960s thought they could do what they wanted to the bodies of their wives, this is the nasty fact loitering in the centre of this beautiful novel. As Elena and Lila find their way into the modern world, they enter into a place where female sexuality and female intellectualism is no longer disgusting, but is accepted and praised and normalised. At least for Elena – particularly if we do read the character as the child version of the novelist – we know she succeeds, in the long term, but we do not yet know what happens to Lila, in the years before she disappears in the present day and where she goes once she has. I think, as I read through the series, that the old lady Lila has become will never be found by Elena, I think she will have found her freedom and will have found a truer happiness, where she depends on no one. The idea of this pained, brilliant, individual finding internal peace is making me emotional. That’s how affecting Ferrante is: her characters are making me cry in hindsight.

This is a glorious read, hugely emotive, hugely engaging, beautiful in its descriptions of things and impressive in its evocations of individuals’ behaviour, motives and deep desires. It is an open, evocative and felt novel.

Will I be reading the third volume? You fucking bet I will.

* And by that I do mean female children, I’m not patronising some adult women.

** I’m quitting my job to become an entrepreneur. It’s like when I quit my job to become a novelist three years ago, but if this one fails I won’t lose all sense of self-worth. I.e. if I fail at being an entrepreneur it won’t matter at all, because I’ve already failed at what I wanted to be and what actually matters. And if I succeed at being a novelist, I’ll able to carve out a life where I actually have time to write again, and maybe even earn enough money to get a hair transplant. Typically, though, I’m not optimistic.