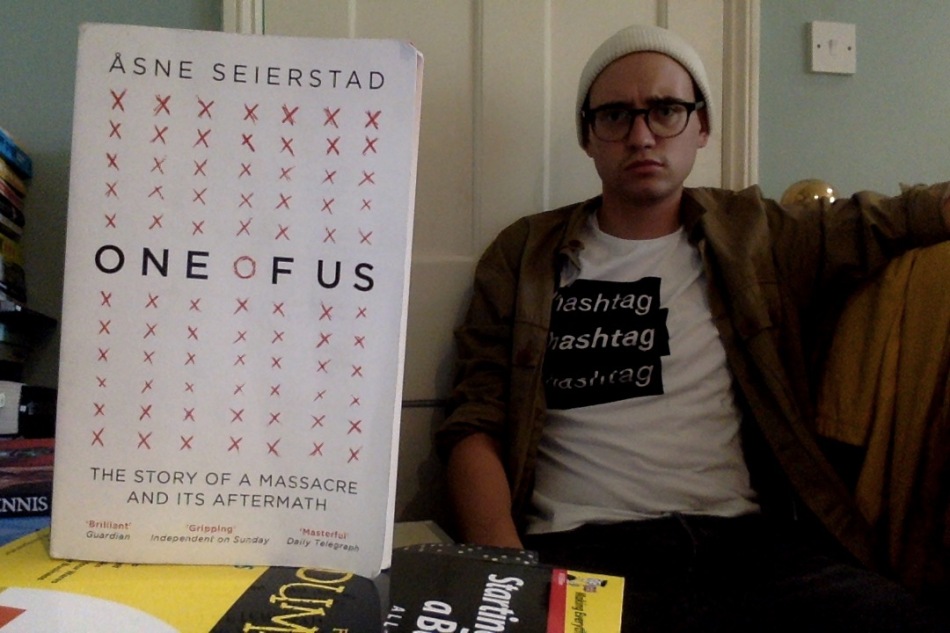 When I struggle to start writing about a book, the reason why is always the same: I have too much to say about it. I have had too many thoughts. I have responded in too many ways. I have spoken about it at length to too many people.* I couldn’t stop talking about this book over the past week. I was up in Edinburgh for a few days for the first weekend of the Festival, but no matter how many plays I saw, I wanted to talk about this. I was at an eight hour first aid course today, and all the discussion of injuries and medical techniques made me think of Utøya, the Norwegian island where, on July 22nd 2011, Anders Behring Breivik murdered 69 people, most of them teenagers. He also detonated a bomb in Oslo’s government district that killed eight people, and he calmly handed himself over to police when he knew his point had been made. Breivik was an extremist right-wing, anti-multicultural, anti-Islamist terrorist, and his attack was against Norway’s Labour party, who he deemed too liberal and open. He planned his attack for a while, and on the day nothing went wrong, no one stopped him and no one injured him. His crime was a deeply atrocious act of malevolent hatred against his country, against progressivism, against the modern world and against his own future. But – and this is the first key question – was he mad? And – the second – is it better for the wider world to see him as insane and unaccountable for his heinous crimes, or sane and rational, but deeply, deeply, morally corrupt? These are the two questions at the centre of One of Us, but even taking that into account, this book is far more than the study of an awful man, it is an exploration of the damage he did, of the people he killed and the people he maimed and the people whose families were destroyed. One of Us is a harrowing, but deeply, deeply, important book, and one I am going to – at the end of paragraph one – recommend you to read.

Åsne Seierstad wrote The Bookseller of Kabul, something I’m sure you’ve all heard of. She’s written several other books, too, all about war zones and international conflict, but all of them in places far away from her native Norway. Breivik’s atrocious act brought the horror of international war zones to her homeland. The violence he unleashed was like nothing the country has seen before or since, but to him it was the beginning of something, to him it was a call to arms. No one has followed his lead (one of the few positives to be taken from the narrative), but he got what he wanted, which was the international dissemination of his ideology (racist isolationism, but with revolution against liberal European states as a starting block) and international fame. Breivik’s trial was major international news, as was his act of terror the year before. It is not difficult to understand why the murder of so much innocent life found so many international ears, and it is no surprise that a best-selling writer of creative non-fiction researched with great journalistic integrity would be drawn to this horror so close to her home, her safe space. Seierland is only present with us, literally, at the very end of the book – there are a few flashes of personality before, but it is only when Breivik’s mother is conducting a deathbed interview that we truly begin to understand that all we have read has been amassed and invigorated by one person, who then receives a few letters from the killer himself, and it is only then, in an all too brief Epilogue, that we learn about her methods and her life as she created this impressive, haunting, tome.

The first 80% of the book moves chronologically, steadily, from Breivik’s birth through to the massacre on Utøya, continuing until all the missing have been accounted for, all the dead have been named and all the survivors have been reunited with their families. In this section we have numerous viewpoints, we see the lives of children who would become victims of Breivik’s crimes as they grow up, mature, join the Labour movement and make plans for their visit to the party’s youth summer camp on the island. Some of the children are at the end of school, some are a few years younger. All are optimistic and happy and (broadly) high achievers. They are politically engaged and have active social lives. Those we meet in detail we know well, and we also know that they are going to die – why else would Seierstad have included them?

We meet their parents and their siblings and their friends, we watch as they get closer and closer to the island as Breivik (after a very strange life, including working as a forger, isolating himself playing World of Warcraft full time for several years in his late 20s) plans his events in detail. As young, upbeat, children plan their lives, get excited about university, DIY projects, school next year, family holidays later in the Summer after the Labour Youth Movement summer camp, Breivik is making a bomb and disguises, he is amassing an armoury and he is writing a manifesto and editing together short films describing his ever more extreme opinions. They collide, and in a 70 page chapter we watch, powerless, as innocent people are killed in Oslo, then Breivik travels the short distance to Utøya and starts shooting. Seierstad – I believe – documents every death, counts every single person – adult or child – as Breivik roves the island, shooting. Some hide, some run, some talk to him before he kills them, he allows the child of one of the adult supervisors (who he’s already killed) to live, because he is “too fucking young”, and he goes on and on and on and it is horrible. I read it on the train home from Edinburgh** and I wept and shook and shuddered and breathed deeply. As characters as I had come to care about were stalked over an island by a man whose whole horrible life I had witnessed, I was engaged and tied up and deeply emotionally invested. Breivik was awful, but his plan was meticulous and the Norwegian state didn’t get to him until after he had already offered to hand himself in (though no one passed that message on). On July 22nd, he kinda won, which was awful. And then, in the real narrative twist and a pointed narratorial gesture, the reader is encouraged to side with him.

Woah, not in that way. Not to think he was right or that his opinions and actions were valid or forgivable (they’re not), but to agree with him that he should be found accountable for his crimes.

Breivik dreamed of leading an international, racist, isolationist, revolution, and he could not do that if he was labelled as mad. However, Seierstad has presented us a deeply fucked up person, but one who is aware of what he is doing it, why is doing it, and chooses to do it. She wants us to see him as sane, accountable, criminal. Would it be more of an indignity for him to be described as insane? For him, yes. But – and this is the viewpoint of One of Us – it also robs his actions of moral stain, it distances him from his countrymen, it makes it easier to ignore the potential of something similar happening again. If Breivik was mad, we don’t need to worry about any other white men behaving like this, we don’t have to worry about terrorism coming from anywhere other than bastardised readings of the Qu’ran, which is the narrative that justifies wars, yeah?

And we’re not safe, not truly safe, not any more.

Maybe that’s a bleak conclusion to take, but the bleak message is what we must fight against. The children who survive the attack and testify at Breivik’s trial are the real heroes of the end of this book; their bravery in the face of the man who maimed and murdered their friends and family, they are the future, not Breivik. Maybe, over time, we can engage with all the broken, sad, angry little bastards in the world and we can look after them until they are happy. Maybe we can make the world a better place so that bad people who feel isolated don’t feel able to do things like this.

One of Us is a beautiful, painful, read.

There is hope here, some hope, but there is also a cynical and understanding modern voice, one we are invited to see as wise, caring, empathetic and human.

Seierstad writes beautifully and with great emotion, she writes as someone who has seen the greatest tragedy her country has known in recent years and has been deeply affected by it, shocked by it, surprised by it… Because she has been, of course she has been.

Breivik was a dick who did an awful, awful thing. But Seierstad wants us to know that he did it on purpose, and that he does not deserve our sympathy. Nothing happened to him to justify this.

Nothing could ever justify this.

* One of the main points of this blog is for me to use it to replace having any friends with similar interests to me. I read so much, and so much weird fucking crap, that I don’t actually get to have conversations about my literary interests with anything approaching regularity. Spending a couple of hours writing to a presumed (or pretend) audience gives me the false impression of having communicated, of having used a book for what I always imagine they are meant to be used for: bringing people together, sharing ideas, stimulating thought.