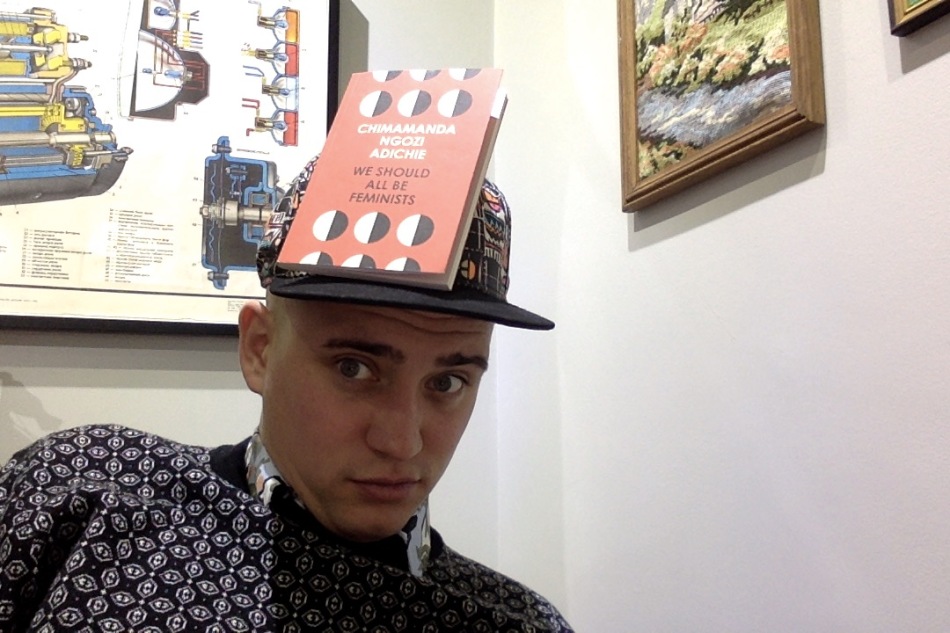 I don’t really know what a TEDx Talk is, but this book – We Should All Be Feminists by Chimamanda Ngozi Adichie (author of Americanah and further acclaimed books I haven’t yet read) – is apparently adapted from one.

This book will be familiar to anyone who’s paid for a book in a physical bookshop at some point in the last year or so, as they all seem to have a little stack of this £5 mini-book next to the tills. I bought this in the Foyles above New Street Station during the Christmas holidays after a long, delicious and boozy lunch at the impressive Simpsons in Edgbaston. I’d already spent far more money than I could afford (can afford, I live in debt these days) on books, but dutifully added this one onto the tottering pile I’d slurringly handed to the assistant and made my purchase. I’m interested in gender, yeah, and I’m interested in race. And – from what I’ve read by Adichie before – so is she. Even though £5 for fifty mini pages isn’t great value for money, the spirit of Christmas (and roughly a bottle of this sublime Chenin Blanc from Stellenbosch winemaker Ken Forrester) was pumping through my achy veins, so the transaction was completed. And there it sits in the above picture, balanced on top of a hat that lies atop my sad, fat, bald, head. Ah, ageing, isn’t it shit? (Especially when you used to be handsome.)

TEDx Talks are – I believe – a series of speeches given by successful people to rooms full of successful people, then watched on the internet by the kind of people who think listening to “serious” podcasts makes them a better person.

TEDx Talks are elite events, they’re not for you and I (like Davos), and because we’re kinda too cool to listen to serious podcasts (though I do FUCKING ADORE this non-serious podcast, Pappy’s Flatshare Slamdown), here is the only way people like us get to experience the content of one: collated and edited into a nice little gift book. Because this is being marketed as a gift, right? It’s short, it’s nicely presented, it loiters by the till in most major booksellers (and is a classed as a bestseller in a reputable one), it’s by a known and acclaimed writer: why not buy it and pass it on to either another appreciative feminist (because I doubt any misogynists anywhere, ever, are buying a book with the title We Should All Be Feminists), or passive-aggressively gift it to a sexist relative. I, like the individualist loner that I am, gifted the book to myself.

The title of Adichie’s book is accurate. We should all be feminists. Because – as she points out (not argues, not believes, not suggests, as she points out) – there is no need for base physical strength to be considered the most important factor in a human’s worth. Creativity and intelligence, especially emotional intelligence, are far more important in the vast, vast, majority of situations in the modern world than how many times you can punch a brick before you give up. There are slightly more women in the world than men (that’s a fact), yet there are significantly more men in positions of power than there are women. “The higher you go, the less women there are” is a quotation Adichie riffs on for a while. The disproportionate representation of men in politics, in high level business, in the Arts (and I would say “in everything else”, but is anything else considered important other than Power, Money and Culture?) is conspicuous.

Adichie speaks about male friends she has who say things like “But men and women do have the same opportunities now” … Men presuming their own experience is the only evidential truth … men saying things like “why can’t you talk about the problems in your life as human problems, rather than female ones” … “It may be bad being a woman, but it’s worse being a poor man”, men competing for claims of victimhood (though not their own, you know, just other men’s status as victims) … Men who talk about their lives in terms of being a “black man”, not a “black person”, telling Adichie to stop talking about her experience as a “black woman” … She writes of going to restaurants in Lagos where waiters only acknowledge the man she is with … She writes of giving a tip to a taxi driver and for him to thank her male friend, presuming that any money in her purse belonged to the man she was with … She writes of women who pretend to be married so that they’re taken more seriously at work … She talks about how women have to worry about how they’re dressed and how their personality and value is guessed as based on their appearance … She talks about how female virginity is praised whereas male virginity isn’t, how people want their sons fucking around but their daughters locked in at home until they’ve already found themselves a husband … Adichie writes of personal experience and the experience of women that she knows and has spoken to, illustrating the ridiculous dual standards to which women and men are held the world over, and how this makes life difficult and unpleasant for everyone.

Adichie discusses how men feeling shame for being poor or shame for being weak or shame for having less money than their partner are all the result of patriarchal culture; she writes about how many men feel that violence is the best way for them to exert a power they don’t feel they have, about how men feel that sex is essential and deserved, how men objectify and sigmatise and judge women who they don’t know, entirely because of what society has encouraged them to think. Feminism is good for everyone, because everyone would be happier if all women were treated better, if individuals were able to seek and experience lives suited directly to their individual personalities rather than a pre-diagnosed idea based on whether they have a dick or not. If all the jobs that required intelligence were done by the most intelligent people rather than the most intelligent men, if all the strongest people did the heavy lifting, the most empathetic people were carers, the most talented people created our culture, the most rounded and grounded and appropriate people were our leaders, y’know, the world would work better. It’s about efficiency and optimisation, it’s a capitalist argument for equality and – for me – it’s a good one.

It is true that progress has been made, but it is wilful blindness to claim that things are good now, rather than better.

Adichie’s lecture/essay is heartfelt, is angry, is serious and important, especially with Donald Trump – a confirmed and unashamed sexist – the 45th American President. Let’s all be feminists, yeah, because it’s what the world needs.

It’s a fiver, get a copy on your coffee table or next to your toilet. A relevant read.