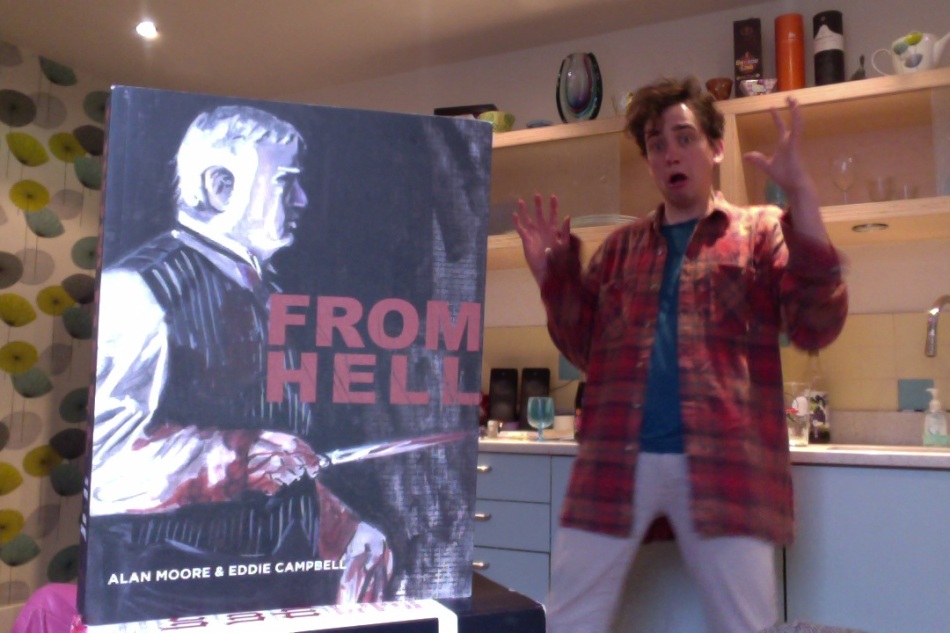 I’d like to point out, before I begin this review, that I didn’t like graphic novels before they were cool. I wasn’t reading Alan Moore when to do so was an edgy, alternative life-choice that ended up giving much hipster capital years later. In the days when I read unfashionable books, the unfashionable books I read were even more unfashionable and are never likely to become fashionable. Graphic novels are only something I have come to enjoy since they became firmly rooted in the mainstream of contemporary literature. And that is to my loss, because it means there are still many classics of the genre I am yet to touch.

Like the two Alan Moore books I’ve read before (Watchmen and V for Vendetta), From Hell was great. But unlike those two, it is packed with appendices at the back that make clear the huge amount of thought and research that has gone into its production.

From Hell is a dramatisation of a Jack the Ripper theory. For anyone who doesn’t know “what” Jack the Ripper was, he was basically a nineteenth century Peter Sutcliffe who was never caught. Since 1888, rumours and theories and ideas have circulated in British popular culture – who was it, really, who went round murdering prostitutes in Whitechapel? No one knows, and (let’s be honest), no one ever will. Moore explores one theory in detail, and does acknowledge in his notes that it is one among many. His Jack the Ripper was a Freemason-sponsored doctor killing women who attempted to blackmail the Royal Family.

Now, that isn’t “spoiling” the book, because it isn’t a mystery – the reader does not go through From Hell looking for the why, but for the what. Eddie Campbell’s haunting images explore the murderer’s viscera-heavy slashfests, as well as evoking strongly the poverty of Victorian London. It is a physical text, lots of sex and lots of violence, as is absolutely appropriate to the subject. The images, uncoloured, offer dark snapshots of places and people and acts in an angry, violent age.

The theories and the supporting evidence is explored interestingly in the prose Appendix, and the history of Ripperology offered as a comic strip at the end is also informative.

This is a text full of detail, much of it horrid, much of it cruel. But that’s exactly what it’s trying to do.

It’s terrifying and haunting and really makes me want to go and explore the Hawksmoor churches and other Freemason-associated buildings in London – they look great here.

The first thing I’ve read and enjoyed set in London for a while. Though I think that says more about me than it does about the book.

A great read. If you’re in the market for a scary, stimulating, comic, I’d highly recommend From Hell. YEAH!

0 comments on “From Hell by Alan Moore and Eddie Campbell”