PART OF A SERIES ON THE BALKANS

OK,  yes. Three reviews in a row about the same writer. I look obsessed, I know. I’m not, I’m just sliding you through and into the books I read for the interviews I conducted while in the Balkans. I’m typing this on Sunday 9th April, just after 6pm, with this view: 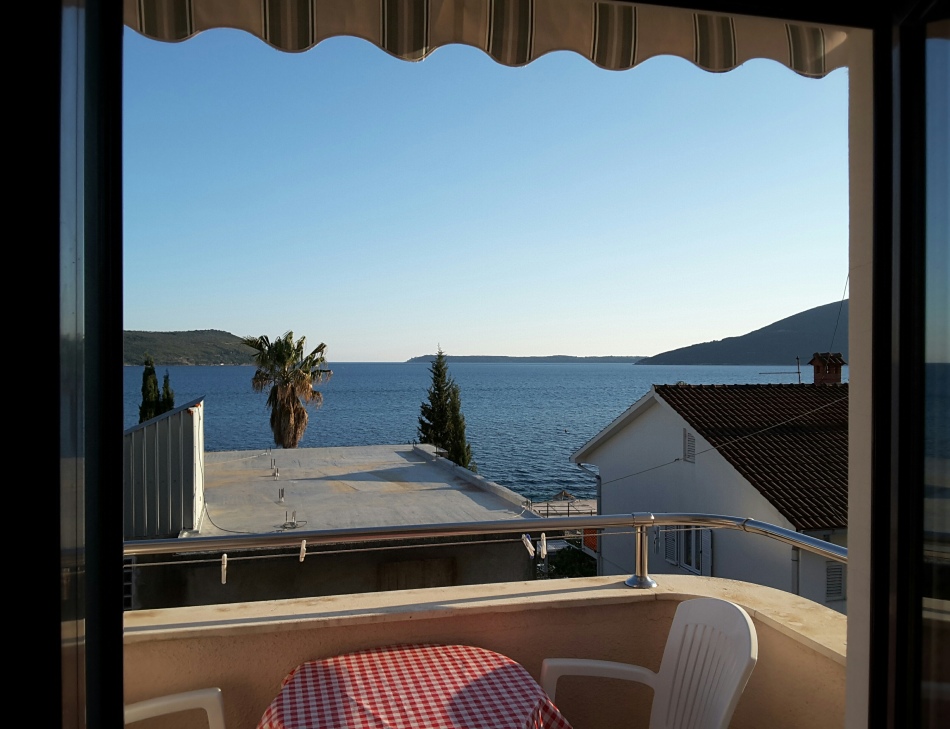 I don’t want to appear too smug, because I’ll be posting this in a few weeks when back in grey England, reminiscing on my weird travels, my mini-break speed-dating. So I’m making myself as sun/sea-envious as I’m making you, whoever you are.

I woke up this morning in Ulcinj, dressed, drank some instant coffee and went to meet Andrej Nikolaidis in a beachfront cafe called Riva, beside the mosque. We chatted for about an hour and he talked to me about his inspirations (life and reading, never imagination); about the horrors of living in a resort town and how much he enjoys winter due to the absence of the on-season hordes; about the changes caused by becoming a parent (he is not better, just different); about how vulgar and unartistic politics is (he first made his name as an antiestablishment columnist and now cultivates the writing of apolitical fiction); and he also told me about his forthcoming novel, The Hungarian Sentence. This new book sounded a lot like one of my favourite novels, Zone by Mathias Enard. It is a single sentence novel about a man on a train looking backwards through his life. I’m sure the detail will be different, but the structure is almost identical. As a BS Johnson fan1, though, I’m not really in a position to criticise writers for openly using other people’s concepts. Maybe The Hungarian Sentence is as good as Zone, I don’t know. Certainly, the short extract I read was great, but one can’t judge a novel from a few pages. Either way, I’m looking forward to reading it, as I’ve thoroughly enjoyed all three of Nikolaidis’ novels, and I also enjoyed chatting to him. Hopefully, once the Balkan episode[s] of #TotNTV is/are released you’ll enjoying chatting with him too.

Anyway, this intro is too long.

The Son is either Nikolaidis’ first or second novel – I was a bit confused about order before our interview and left it slightly more so – and he told me he saw it as a reimagining of Camus’ L’Étranger. Rather than lots of short chapters – as his other two novels have – this one contains three pretty hefty chapters, each of which look deeper into the underbelly of Ulcinj, which the protagonist wanders around alone, encountering families of lepers, families of prostitutes and many other people from his past who he wishes to avoid. As with the other novels, depression is a constant theme, and there is also a lot of boozing. ASIDE – I asked Nikolaidis about the long border wait I had the day before, and he said it’s normal. He also told me it is rumoured there are lots of marijuana farms in Albania, that there is much less smuggling – he thinks – than there was in the ’90s and expressed the increasingly common opinion that the criminalisation of cannabis is problematic. To go on record, I honestly struggle to understand the appeal of being stoned but see that many people love it – exactly the same as my opinion of ITV – but as it is a) effectively already legal in most parts of London and b) stoners generally do less damage to others than drunks, it should be legalised and taxed. Like the splashback from watersports (both kinds), I don’t particularly want to be sprayed with secondhand ganja smoke, but what people do to themselves in privacy or the appropriate public places (which is now all London parks and streets, most London parties and a good third of London pub smoking areas), is not for me to criticise. UNASIDE

Ulcinj’s “seedy underbelly” (one of my favourite cliches) is explored, especially its tourism industry. In Nikolaidis’ other novels we are outside of tourist season due to time/the forthcoming apocalypse, whereas in The Son the tourists are here, and they are awful. Rendered seedier by the literal and metaphorical prostitution of the town, our outsider protagonist watches and does nothing as his father’s property burns, he wanders around the town, avoids contact but is sucked in. Not very much happens, but in an energetic way. They is a frenetic edge to the text (again, well translated by Will Firth) and the protagonist’s movements are nervous, intense, hungry, thirsty and horny. This is the same world as the other two novels, and Nikolaidis described them as a trilogy this morning. The only real clue to this – other than the summer snow in the other two books – is a very unsettling moment in this book where we experience, first hand, one of the temporal lapses of Till Kingdom Come. I intended to ask about this directly, but didn’t, and it is a link, a scene, that would only have an impact on a reader if he or she had already read the other novel. For me, reading it in opposite order of composition and publication, it felt unsettling in the way that the memory in Till Kingdom Come that is revealed to be a flash forward was unsettling. I’d been there before, but the second time I knew why, the second time it fitted and the second time it made more sense. I liked this intertextuality, this metatextuality, showing us that the books are from the same writer, rooted in the same place.

Much like The Coming, The Son also asks more questions than it answers, and closes with the revelation of more mysteries, rather than the discovery of an answer. Nikolaidis told me that his – and possibly all – writing is concerned with the search for an unattainable Truth, and though we will never reach it, wanting to reach it, trying to reach it, is what matters. His literary interest in the apocalypse comes not from an interest in endings, but an interest in Knowledge, in Revelations. He leaves us with no answers and this is not unsatisfying. This is not a mystery book, it is a mysterious book. And that is its great strength.

I really enjoyed the work of Nikolaidis I’ve read over the last week, and will definitely keep an eye out for The Hungarian Sentence. For anyone else who likes early Haruki Murakami, I’d also heavily recommend this guy. Three great novels, all available from Istros Books.

1. Also the two unpublished novels I wrote in the first half of my twenties are incredibly derivative. I’ve probably also accidentally plagiarised my “literary lifestyle blog” concept from somewhere too, maybe Geoff Dyer? ↩

4 comments on “The Son by Andrej Nikolaidis”